Police: Commuter Slashed in Face After Confronting Man Who Slapped Another Passenger at NYC Subway Station 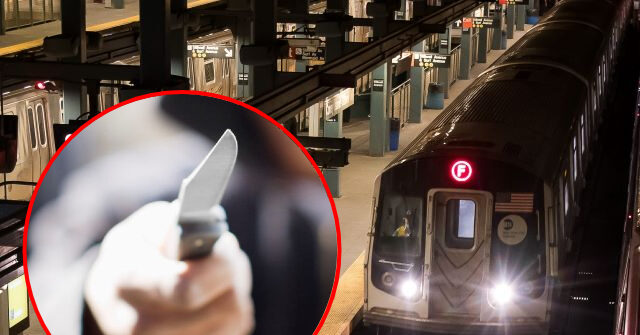 Police say a 36-year-old commuter was slashed in the face by a man who had just assaulted another passenger at a New York City subway station on Sunday.

The slashing occurred at 10:20 p.m. at Bedford Train Station in Brooklyn in the Williamsburg neighborhood, according to the New York Police Department (NYPD).

The 36-year-old witnessed an unidentified man slap another commuter in the face at the L train station.

The Good Samaritan attempted to intervene, but police say the suspect slashed him across the face before fleeing the station.

The victim was transported to Bellevue Hospital by EMS, where he was listed in stable condition.

The NYPD is still searching for the suspect and released an image of him. He was last seen wearing a blue shirt, black pants, and a black backpack while riding a red bicycle.

Anyone with information in regard to this incident is asked to call the NYPD’s Crime Stoppers Hotline at 1-800-577-TIPS (8477) or visit the website at https://crimestoppers.nypdonline.org/, on Twitter @NYPDTips.

Eight days before this incident, another assault occurred on the Avenue H station in Brooklyn, where a 64-year-old was hit in the head with a rock by a shirtless man, Breitbart News reported.

The following day, an 18-year-old girl was reportedly stabbed in the lower back following an altercation with a group of other passengers on an L train platform in Manhattan.

The Democrat-run New York City is currently in the midst of a crime wave, as overall reported crime has spiked by 35.6 percent since this time last year. Every major crime category, except murder, has significantly increased in reported incidences.

Crime in the NYPD’s 94th precinct in Brooklyn – where the reported slashing attack occurred – has increased by 45.2 percent since last year.