Please Laugh About My Abortion With Me 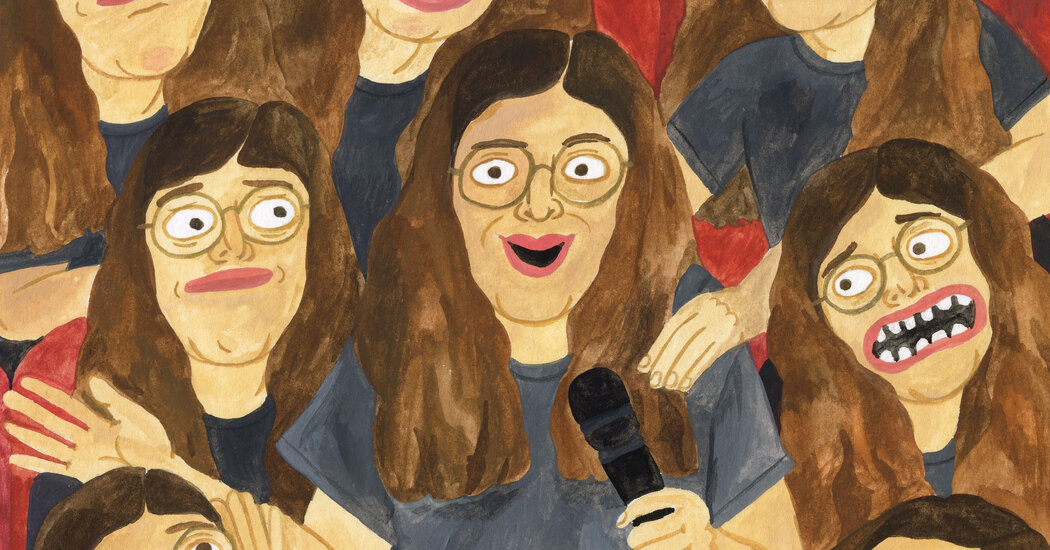 On Friday evening, June 24, I arrived at the Cherry Lane Theater in Manhattan having already traveled between outrage, exhaustion and despair. Roe v. Wade had been overturned that morning, and I was about to perform my comedy show “Oh God, a Show About Abortion.” I had performed the show after the draft of the Supreme Court decision in Dobbs v. Jackson Women’s Health Organization leaked, and the mood in the theater then was somber; an edgier joke, one that normally elicits reluctant bursts of laughter, earned groans.

This day felt even heavier, and as I rounded the corner onto Commerce Street, I wondered if the audience would be up for the laughs. And honestly, I wondered if I would be too.

I started writing and workshopping this show more than three years ago. I had recently had an abortion, and in processing my experience I started writing jokes. Some things about the experience, frankly, were just funny. Like the fact that I peed in a crystal scotch tumbler in a hotel bathroom to take a pregnancy test. And the fact that every woman in the waiting room at Planned Parenthood was wearing athleisure, like we were going to a SoulCycle class.

When I started performing the show at a tiny theater in Queens and at bars around the city, there were a lot of bombs and uncomfortable silences. Just saying the word “abortion” can quiet a room. I saw crossed arms and scowls when I would dip my toe into my abortion material.

I know that the attention “Oh God, a Show About Abortion” has gotten is not because I wrote a perfect comedy show. It’s in part because we’re living through a tumultuous and painful — and hopefully brief — moment when the right to abortion has been ripped away. It’s also because a lot of people appear to relate to my story. I talk in the show about how I feel bad about not feeling bad about my abortion. I talk about how hard it is to be a woman who doesn’t want children in a culture that doesn’t make room for us outside of a few depressing stereotypes. I talk about how surprisingly simple my abortion experience was, despite the fact that every corner of our society told me it would be an overwhelming tragedy. I get messages from audience members all the time telling me they were delighted or relieved to see something they have felt or experienced accurately reflected back at them, without apology.

I understand that not everyone wants to approach abortion with jokes. I understand it feeling too soon to laugh in the wake of Roe being overturned, and I understand people whose experiences were traumatic. But for those who are up for it, I think having a healthy sense of humor — one that is predicated on personal vulnerability — is an extremely valuable coping mechanism in these dark days of American culture.

While my abortion experience was easy and privileged, and I make jokes about it for a living, the realities of my life without that simple procedure are not funny to me. I would be raising a child alone. I wouldn’t be able to live in my apartment in Brooklyn. I wouldn’t be able to afford the kind of child care that would allow me to continue my professional life.

I hope that the show helps destigmatize a procedure that should have no stigma. The show also has helped me on a personal level. I needed to laugh through my abortion experience because the alternative — the way my life without the abortion could have turned out — is so upsetting.

Also, it’s funny that there was a maternity wear store across the street from a Planned Parenthood.

Abortion stories don’t need to be the trauma Olympics. We don’t need to only focus on the most upsetting, violent, dramatic instances of abortion to make the point of its value. We must acknowledge and fight for those cases. We also need to acknowledge and fight for the right that has just been taken from millions of Americans: the right to decide if we want to be pregnant based solely on our own needs.

I wrote the show to help people understand and laugh about abortion. Maybe now it can be something more, helping to reframe discussions of abortion and encouraging others with stories like mine to feel comforted in their decisions. I also hope that it can open the door for other people to share their stories. More than anything, I hope that the show can be a tiny piece in the larger mosaic of abortion narratives — a mosaic that can hopefully play a part in regaining and protecting the right to abortion for every person who needs it.

On that Friday after Roe was overturned, I stepped out onto the stage, and the energy was not somber at all. I was greeted by a room full of people ready to laugh. In a world that’s still so often defined by remote work and food delivery, that evening provided a sense of community for everyone there, including me.

I cried as the show ended, partly from my sadness and anger about the loss of civil liberties for so many people in this country, and the damage and death that will result. But also I cried from the happiness of being with people, and getting to feel these things together.