Pirelli's surreal 2023 calendar is an homage to female trailblazers 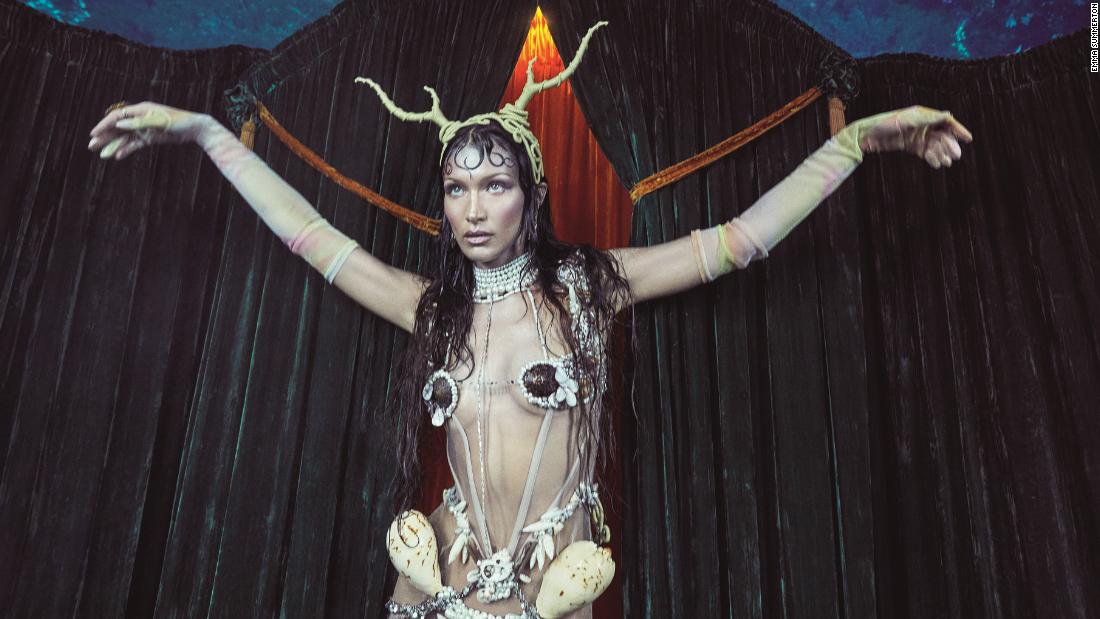 Titled “Letters to the Muse,” the calendar is an homage to a group of “extraordinary women” — artists, activists, athletes and other trailblazers — said Australian photographer Emma Summerton, who have inspired her.

“I wanted to go back to the etymological root of the word ‘muse’ and portray women who inspire me for their contribution to literature, science and the arts,” Summerton told CNN at the Italian tire company’s Milan headquarters, where the calendar’s press event was held.

“The idea was to represent what they really are, and create worlds that could reflect and tell their bigger stories.”

As such, the cast of 14 models are seen as various “muses” in highly-stylized photographs nodding to their work beyond the runway. Cara Delevingne, for example, who has starred in a number of movie roles in addition to her highly successful modelling career, appears as “The Performer”, dressed in a macrame outfit and striking poses among giant dandelions.

Shot in New York and London over the summer, the models were photographed against elaborate backdrops, imbued with magical realism and surreal elements like the aforementioned dandelions, dark woodlands, owls and optical mirrors, courtesy of set designer Viki Rutsch. To complement them are fantastical costumes by fashion director Amanda Harlech.

“Having an almost all-female team made the whole experience feel extra special,” Summerton said. “It was a great collaboration.”

The hotly-anticipated annual calendar has featured some of the world’s biggest models, from Iman to Kate Moss. A different photographer is chosen each year, with Annie Leibovitz and Richard Avedon among those previously asked to do the shoot.

Summerton is the fifth woman to shoot the calendar since it was first launched in the 1960s by the Italian tire company. Before her, Pirelli enlisted Sarah Moon in 1972, Joyce Tenneson in 1989, Inez Van Lamsweerde (together with Vinoodh Matadin) in 2007, and Leibovitz in 2000 and 2016.

“It’s something I’ve always wanted to do,” the photographer said of the project. “And I hope more women will follow after me.”

‘Not your daddy’s pinup’

From the moment she took on the project, Summerton knew muses would be the concept for her version. Her initial mood board featured some of the female creatives that have most influenced her work, from British-born Mexican painter Leonora Carrington and Italian actor Monica Vitti, to American experimental filmmaker Maya Deren and Australian artist Vali Myers.

Summerton used them as reference to build each character, “and create a sort of energy around each muse” that could help create a deeper, broader conversation between the subject and viewer around beauty, empowerment and vulnerability.

Emily Ratajkowski was cast as “The Writer.” Credit: Emma Summerton

Guinevere Van Seenus — “The Photographer” — was the first model she shot (“starting with the photographer felt natural,” Summerton said). In the photo, Van Seenus is pictured holding a camera in front of a full-length mirror, from which an owl is perched.

“Emma put together a dream, and watching her do that was an education for me to say the least,” the American model and photographer said at the Pirelli event. “I think she was really looking for the depth of women in every picture.”

Guinevere Van Seenus as the “The Photographer.” Credit: Emma Summerton

“These pictures leave you captivated and wanting for more,” she said. “That’s so hard to do with images nowadays, because we’re so, so saturated with them. But Emma’s photos resonate differently. She really captured me and my essence of resilience and strength.” At 24, the model, Toxic Shock Syndrome activist (TSS) and once basketball player, suffered from TSS which led to the amputation of both of her legs. Continuing her career by storming the runway wearing prosthetic legs, she’s been hailed as game-changer in the industry.

For the calendar, she was cast as “The Athlete” and shot as Joan of Arc on top of a golden crescent moon against an ocean backdrop, clasping a large silver sword in the stance of a warrior.

“I felt really strong and powerful,” Wasser said, who wore golden prosthetics for the shoot. “Emma knew how to depict our angles and our strengths. I think that’s something that we don’t really get to see in the fashion world.”

Nor, for much of its history, in the Pirelli calendar itself. But in 2016, Leibovitz broke with its tradition of mostly artistic nudes and sex appeal, photographing a cast of high-achieving women in almost entirely clothed portraits. In recent years, it has continued to show more nuanced, diverse expressions of beauty.

“It’s not your daddy’s pinup calendar anymore,” said Ashley Graham, who featured as “The Activist.”

“The calendar for 2023 is probably the coolest they’ve done because it actually lends a voice to everybody that’s involved. And it bridges fantasy and reality, the model and body positivity activist said. For me, it really allowed me to be myself.”

The photographer noted that the accompanying film showing the making of the calendar helps drive home the shift away from the objectification of women.

“I wanted to hear what these women had to say and see them talk about who they are and what they do,” Summerton said. “It just went hand in hand with the photos, because when you look at them you want to know who they are.”