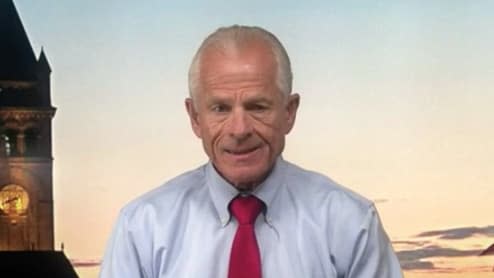 Former Trump White House official Peter Navarro, who helped devise a scheme to overturn the 2020 presidential election, declared Monday that former Vice President Mike Pence is “guilty of treason to at least President Trump and perhaps to this country.”

Navarro, who has been criminally charged for ignoring a congressional subpoena for testimony over his involvement in Jan. 6, last month unsuccessfully tried to delay his trial, claiming his book tour will occupy too much of his time. A frequent, talkative guest on news networks, the Trump administration trade adviser still managed to do some promotional work for it Monday on the friendly airwaves of The Balance, Eric Bolling’s Newsmax show.

Recalling the days prior to Jan. 6, Navarro told Bolling that he remembered an aide telling him that Pence wanted to speak with him over the phone.

“I get on the line and it’s crickets. And what happened, I think, was that his Koch Brother chief of staff, Marc Short, intercepted the call [and] backed Pence off,” Navarro said.

“And the reason why I think Pence is guilty of treason to at least President Trump and perhaps to this country,” he claimed, “is that he acted on the basis of a flawed legal opinion concocted by his own general counsel that he did not share, Eric, with either the president or the president’s White House legal counsel.”

Bolling did not push back against this serious allegation, which is punishable by death, but merely asked for clarity from his guest. “So, lack of movement—lack of doing anything —is what you’re describing as treasonous activity by Pence?” Bolling asked. “Nothing necessarily that he did, but that he had an opportunity to do something but he didn’t do it?”

Navarro then reiterated that Pence had a “duty” to inform the president and his legal team of what Navarro insisted was a “flawed” legal opinion: that Pence did not possess the authority to prevent the certification of Biden as the election winner. Navarro argued that Pence did—a claim legal experts have rejected.

Pence, Navarro complained, effectively “stuck a knife” in Trump’s back by not adhering to his scheme.