Paul Ryan says he’s ‘comfortable with the decisions’ he made regarding Trump, blasts those who wanted him to ‘start’ a GOP civil war and ‘achieve nothing’: book 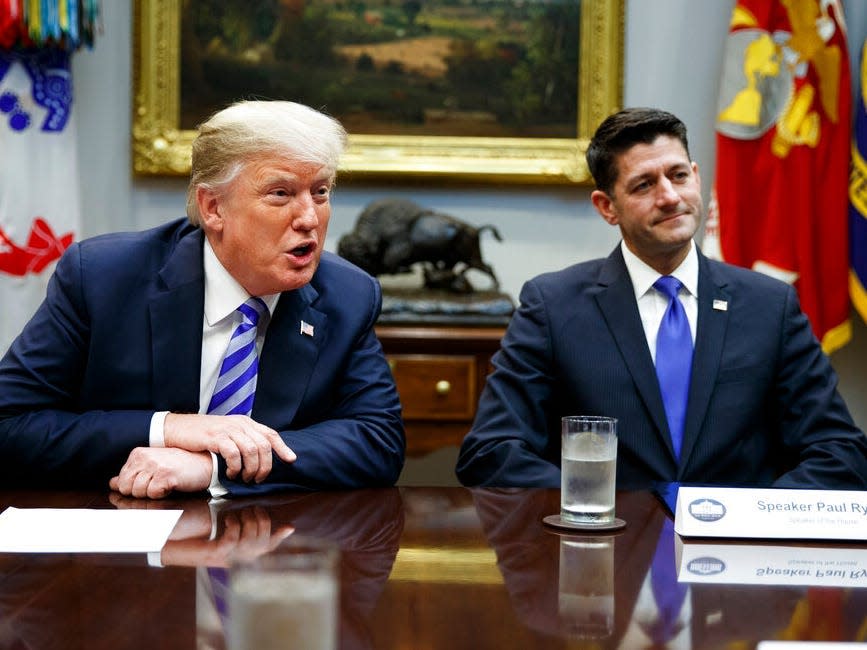 Former House Speaker Paul Ryan said he was “very comfortable” with the decisions he made regarding Donald Trump and dismissed critics who wanted him to be more vocal in rebuking the then-president’s behavior, according to a new book by Mark Leibovich, a staff writer at The Atlantic.

In the book, “Thank You for Your Servitude: Donald Trump’s Washington and the Price of Submission,” Ryan told Leibovich that he opted to share his feelings with Trump privately, similar to other Republicans who were able to work with Trump during his White House tenure.

Leading a Republican majority in 2017, Ryan shepherded legislation through the House that cut the corporate tax rate from 35% to 21% as part of the Tax Cuts and Jobs Act, among other conservative policy victories.

Ryan — who represented Wisconsin’s 1st congressional district from 1999 until 2019 — wouldn’t reveal to Leibovich what “tragedy” he was referring to, but some felt that Ryan should have been more forceful about pushing back against the former president’s excesses.

George Will, the veteran Washington Post columnist, wrote in a June 2018 piece that Ryan “wagered his dignity on the patently false proposition that it is possible to have sustained transactions” with Trump.

However, Ryan told Leibovich that he doesn’t regret how he handled his working relationship with Trump.

“I’m very comfortable with the decisions I’ve made,” Ryan said. “I would make them again, do it again the same way.”

He then posed the question of whether some people would have preferred that he chide Trump whenever the president made a controversial comment or wrote an inflammatory tweet.

“I think some people would like me to start a civil war in our party and achieve nothing,” Ryan said.

During his time holding the Speaker’s gavel, Ryan — who was the GOP vice presidential nominee in 2012 — wound up leading a House caucus whose ascendant ultraconservative Freedom Caucus often threw a wrench in the legislative process.

Ryan, similar to his predecessor John Boehner of Ohio, was also not resistant to cutting deals with Democrats to pass legislation.

“Ryan’s departure became inevitable after a certain point,” Leibovich wrote in the book.

“The MAGA types never trusted him. Yet he was still lampooned as one of Trump’s chief enablers and portrayed as a weak supplicant,” he added.

Last month, Ryan gave a stump speech for GOP Rep. Tom Rice of South Carolina, who voted to impeach Trump for “incitement of insurrection” for his role on January 6, 2021. More Republicans would have joined the congressman in backing Trump’s removal from office but lacked the “guts” to cast the vote, Ryan said.

Trump quickly responded to Ryan, taking to his Truth Social platform and calling him a “pathetic loser” and a “weak RINO,” or Republican in Name Only.