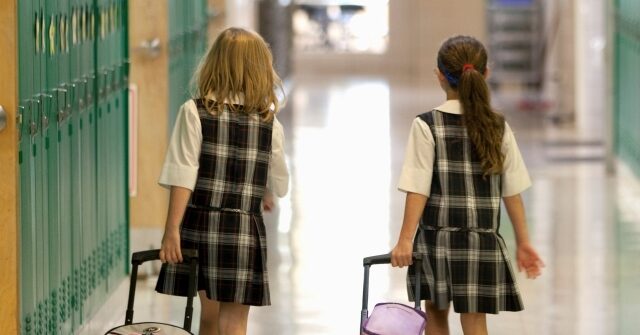 Parents, donors, and alumni of Harpeth Hall, an all-girls school in Nashville, Tennessee, are pulling donations and calling for the resignations of several school officials who they believe have been “enablers of political activism and division.”

The call from parents, alumni, and donors comes shortly after the all-girls school announced that they would be allowing boys who identify as girls to attend. The policy was then ditched just one week after it was announced following backlash from parents and other community members.

The Harpeth Hall Board of Trustees told parents in a letter “Based on the response from our school community, Harpeth Hall is choosing to pause the adoption of the philosophy in order to engage a wider audience in continued discussion.”

But parents, alumni, and donors say that their trust in the board — and in several key officials — has been broken. In a letter to the Board of Trustees, the head of school, and the head of the board, the community members write that the board and the administration have been “more focused on political activism than on educating our girls.”

The Harpeth Hall parents aren’t accepting the school’s statement “pausing” the policy, however. They are demanding all responsible for the new policy be removed from their positions and are withholding all donations until it happens. Read this letter. Boom. pic.twitter.com/1EcLd00ikM

The letter went on to say, “Based on how you have handled this recent gender policy communication, we do not have confidence that certain current members of the board or of the administration are capable of correcting this issue,” adding, “you have lost our trust.”

“We call today for the resignation of members of the administration and board who have been proponents or enablers of political activism and division,” the letter reads, going on to name “Crissy Wieck and the Executive Committee, Jessica Bliss, and Dr. Nancy Beveridge.”

“We will withhold all financial contributions to the school until this action takes place,” the community members warned. It then says “we will submit to the board the name of a female leader to be named the Chair of the Board.” Wieck, whose husband is currently running to be the next Mayor of Nashville, is the current Chair.

As Breitbart News previously noted, Harpeth Hall is affiliated with the National Association of Independent Schools (NAIS). An investigative report by Breitbart News found that the NAIS pushes “queer curriculum” and transgender ideology on its students, including those in pre-K.

The NAIS, which consists of nearly 1,800 member schools, is also a proponent of Critical Race Theory and hosts an annual “People of Color Conference,” which has been facilitated by a former Black Panther. Harpeth Hall sends faculty and staff to the conference every year.

A network of concerned parents, called Undercover Mothers, is organizing nationwide to push back against “elite capture” through the private school system — the attempt by the NAIS to indoctrinate students with Critical Race Theory and radical gender ideology.