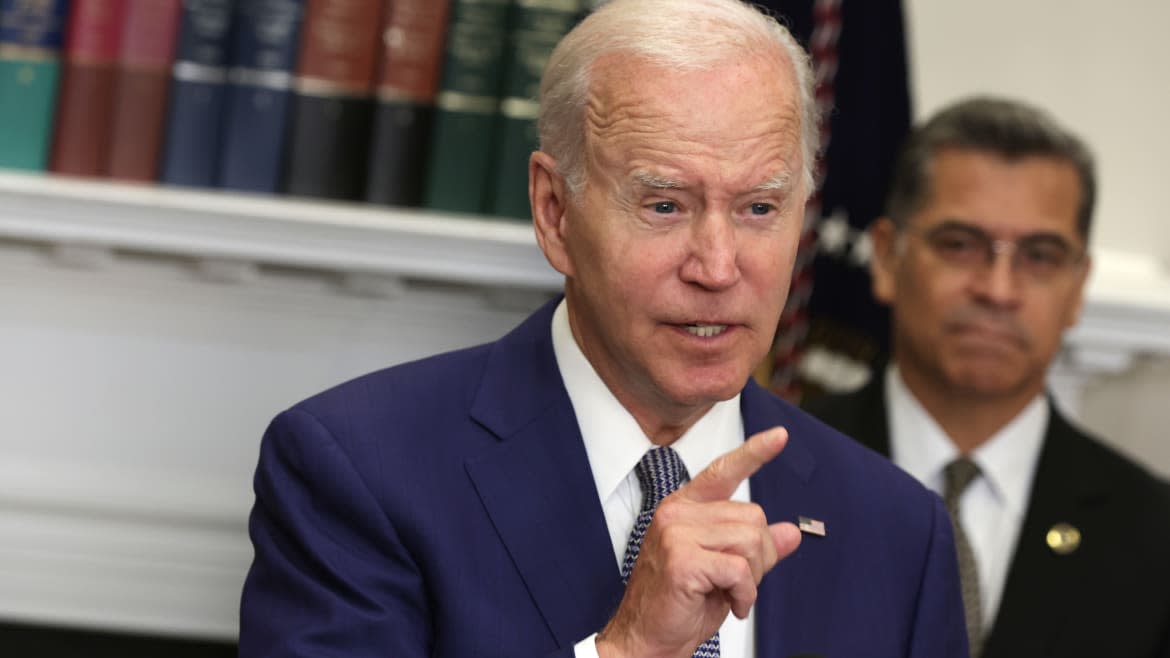 The White House tried to defend President Joe Biden’s seemingly drowsy response to the reversal of Roe v Wade on Saturday but instead sparked instant backlash by labeling pro-choice activists “out of touch.”

The apparent jab was made in a statement to The Washington Post responding to criticism of what many Democrats see as a response that has been too little, too late. White House communications director Kate Bedingfield said: “The president has been showing his deep outrage as an American and executing his bold plan—which is the product of months of hard work—ever since this decision was handed down.”

She went on to say that “Joe Biden’s goal in responding to Dobbs is not to satisfy some activists who have been consistently out of step with the mainstream of the Democratic Party” but “to deliver help to women who are in danger and assemble a broad-based coalition to defend a woman’s right to choose now, just as he assembled such a coalition to win during the 2020 campaign.”

The statement, which many noted had taken aim at those fighting to uphold abortion rights rather than those who actively put women “in danger” by stripping them of the right to bodily autonomy, came as more than 1,000 demonstrators gathered at the Capitol to urge Biden to declare a state of emergency to protect abortion access.

Upon getting to the tall gates surrounding the White House on Saturday, some abortion-rights activists danced while others expressed frustration at the Biden administration.

“Who’s house?” organizers yelled at one point. “Our house.”

Since the Supreme Court decided on June 24 to effectively overturn Roe v Wade, activists and abortion rights advocates have questioned why the White House apparently did not have a contingency plan for such a landmark decision, given that a draft opinion leaked nearly two months beforehand had given fair warning the ruling was on the horizon.

More frustration followed over what many saw as a lethargic response.

It took the Biden administration six days after the Supreme Court decision to announce its support for an exception to the filibuster to codify it into law. Its executive order to protect access to abortions took a week longer.

The White House’s apparent dismissal of some activists as “out of touch”on Saturday seemed to be just the latest move to leave activists feeling jilted.

“All this White House has for people who need abortions is empty promises and disrespect,” tweeted activist Renee Bracey Sherman, the founder of We Testify, an organization that aims to spread awareness about abortions.

Hayley McMahon, an abortion researcher and PhD student at Emory University, tweeted that “Biden and the Democrats have done absolutely fuck all to ‘deliver help to women who are in danger,’ whatever that ultra-vague bulls—t means.”

“I cannot emphasize enough how badly telling pro-choice people to go fuck themselves right after Roe was overturned is going to go,” she wrote.

“It is remarkably concerning that there are members of the Biden Administration who seem more frustrated at pro choice activists than at Republicans who systematically dismantled abortion rights,” tweeted Matt McDermott, a Democratic pollster and strategist.