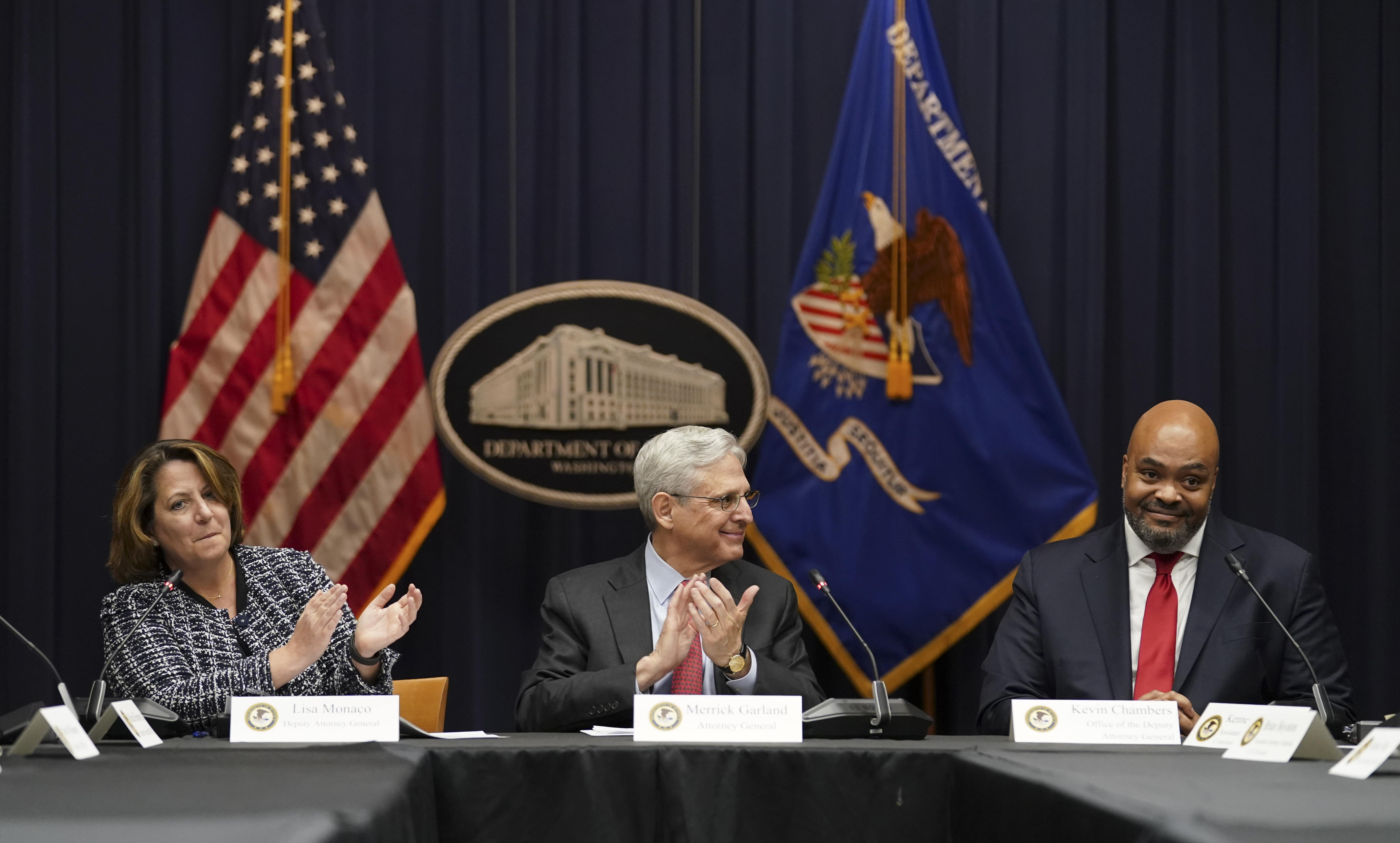 Also, in March 2020, during one of the quickly-infamous daily White House Covid press conferences at the time, Barr announced that the department was creating a task force to crack down on supposedly widespread “hoarding” and “price-gouging” concerning personal protective equipment. The premise was a politically convenient one at the time, since the administration was coming under attack for its own incompetence at accumulating PPE in the early months of the pandemic. Despite the hype, the task force ultimately produced very little — fewer than 20 prosecutions, a DOJ spokesperson told me in the final weeks of the administration — and it appears to have been quietly dismantled at some point, with no public acknowledgment or accounting of its work.

As all of this was happening, the country was being inundated with widespread and eminently predictable pandemic-related consumer fraud — people selling things like fake test kits and vaccines — as well as rampant fraud in state unemployment systems, which were providing federally-boosted benefits. These crimes were not going unnoticed.

At a hearing in June 2020, Sen. Dianne Feinstein (D-Calif.) pressed one of the senior DOJ officials overseeing the department’s pandemic fraud work at the time — a relatively inexperienced former Trump White House lawyer — on what the department was doing to prosecute the perpetrators of pandemic consumer fraud, and the response was meaningless gibberish. At the same time, Senators Sheldon Whitehouse (D-R.I.) and Jack Reed (D-R.I.) urged the administration to address the rapidly growing fraud in unemployment systems by using “the considerable tools at their disposal to crack down on identity thieves at home and abroad and claw back stolen funds.” This could have entailed, for instance, a large, dedicated group of investigators and prosecutors who could have worked to identify some common forensic features across fraudulent applications (like shared IP addresses or bank routing information), to trace and identify networks of fraudulent applicants located abroad, and to cooperate with foreign governments either to prosecute the conduct themselves or to extradite their residents if criminally charged by our government.

But these requests and warnings went largely unheeded, with disastrous results. NBC News recently reported that the losses to fraud in just the pandemic unemployment programs may have totaled between $100 billion and $400 billion. And the Federal Trade Commission has tallied more than $750 million in reported consumer fraud since the start of the pandemic as part of an unprecedented rise in reports of fraud to the agency. But experts estimate that somewhere around only 10-15 percent of fraud victims actually report the fraud, which means the real amount of losses is likely much, much larger.

While the Justice Department during the Trump administration deserves most of the blame for this, just weeks after President Joe Biden’s attorney general, Merrick Garland, took office, the department issued a surprisingly credulous press release that applauded the Trump DOJ’s “historic enforcement initiative” to pursue pandemic fraud and glossed over the department’s conspicuous failings. The work done under the previous administration, it said, provided “a model for proactive, high-impact white-collar enforcement” and demonstrated the department’s “agility in responding to new and emerging threats.” The announcement cited, for instance, “dozens of civil and criminal enforcement actions” related to “fraud schemes targeting American consumers,” as if the distinction between civil and criminal cases were meaningless or “dozens” would sound like a formidable number under the circumstances.

In May, the department seemed to realize that more efforts were needed when it created a new pandemic fraud task force. Then last month, during his State of the Union address, Biden announced the appointment of a chief pandemic prosecutor. “We’re gonna go after the criminals who stole billions of relief money meant for small businesses and millions of Americans,” Biden said.

The sentiment is laudable, but the reality is not likely to meet the aspiration. For one thing, even if the department had been doing its job well from the start (which it did not), resource limitations would have been a major impediment given the sheer volume of misconduct that was likely. But the fact that many of the people who perpetrated these crimes have had ample time to evade law enforcement thanks to the department’s slow and uneven approach makes enforcement at this point much more difficult. A large number of the perpetrators were likely sophisticated criminal organizations and networks abroad, and even under ordinary circumstances, the department struggles to pursue these sorts of groups. Pandemic fraudsters have now had years to cover their tracks — to shut down their operations, to move to different countries using their ill-gotten gains and to hide fraud proceeds in the international labyrinth that constitutes the global financial system.

Even the victory lap taken on Wednesday for a would-be small success is potentially premature. Headline-generating announcements of criminal charges by the department sometimes have a way of looking quite bad in hindsight, after the criminal litigation process unfolds and judges and juries get involved. Indeed in recent weeks, the Garland Justice Department has suffered a raft of high-profile trial losses — from the one and only person charged in connection with the department’s investigation into the Boeing 737 MAX crashes to the alleged plotters of the kidnapping of Michigan Governor Gretchen Whitmer to a series of supposedly landmark antitrust prosecutions that have resulted in acquittals and hung juries and, in turn, have prompted questions about the tenure of the division’s relatively new leader.

Of course, this does not mean that the department should forgo its efforts on pandemic fraud, but it does suggest that we should moderate our expectations despite what the administration may be saying publicly about the issue. It would also be nice if the Justice Department could give the public a frank assessment of its work — not a self-congratulatory press release or speech, but an honest accounting of what it did well, what it missed and what went wrong — so that future leaders and prosecutors in the department can learn from the missteps. Rather than something to be proud of, the department’s performance in this area looks like one of the most significant law enforcement failures of the last 20 years, and it is unlikely that any attempt to play catch-up will change that.