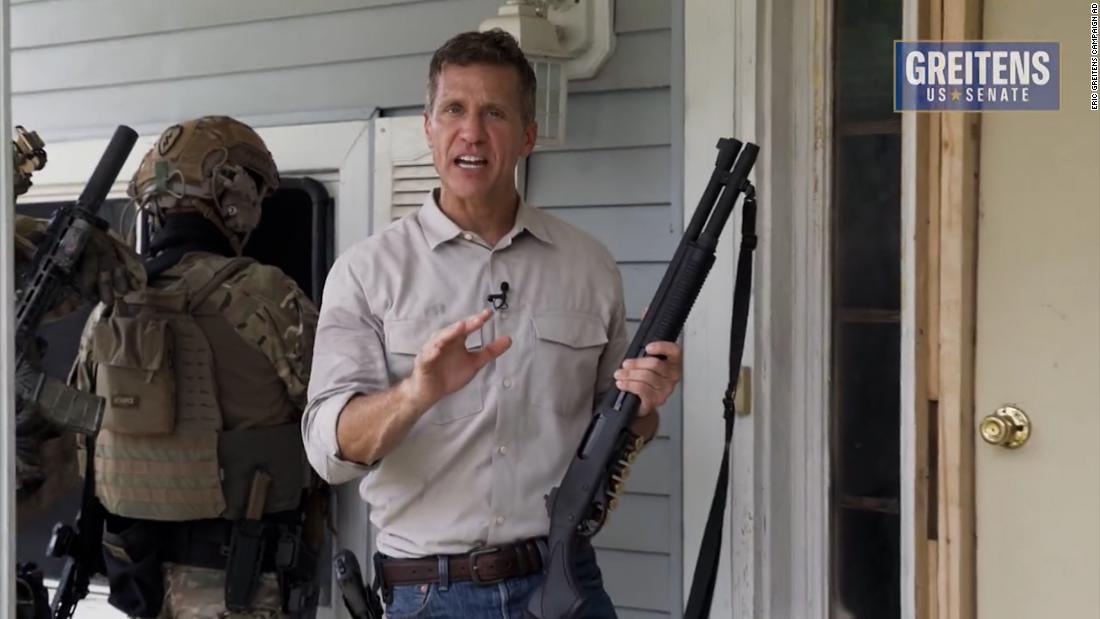 This week, Eric Greitens, a Republican running for a US Senate seat in Missouri, released an ad in which he toted a shotgun and, flanked by camo-clad men carrying assault weapons, went “RINO hunting.” RINOs are “Republicans in Name Only,” or insufficiently radical, insufficiently pro-Trump Republicans. (Greitens has dismissed criticism of the video clip as “faux outrage,” telling a St. Louis radio station that it has a sense of humor and calling the hunting of RINO politicians “a metaphor.”)
Some of history’s leading fascist movements used the strategy of armed volunteer militias intimidating, threatening and attacking political opponents. And the implications of Greitens’ ad are stunning: Line up behind the most extreme right-wing policies — and implicitly behind former President Donald Trump — or be hunted down by armed, jackbooted thugs.
But Greitens is not an outlier in today’s Republican Party, and this ad is not isolated. Self-styled, right-wing militiamen have already targeted perceived political opponents across the United States and attempted to enforce their will by intimidation or force, most notably on January 6, 2021, when a mob partly made up of members of the Oath Keepers and the Proud Boys — two far-right groups — stormed the US Capitol. Some members of those groups have been charged with seditious conspiracy.
This month, members of the Proud Boys and White supremacist groups crashed various LGBTQ events to harass and intimidate participants.
In Idaho, White supremacist and other radical right-wing groups showed up visibly armed and made their way through Pride-celebrating crowds; more than 30 men who “looked like a little army,” according to the local police chief, reportedly were arrested in Coeur D’Alene, Idaho, because, law enforcement says, they were planning to start a riot at a Pride event. These moves come after months of right-wing agitators claiming that liberals and Democrats are “grooming” children by so much as recognizing that gay people exist.
At the same time, the GOP’s extreme right-wing and pro-Trump faction has been rallying against LGBTQ rights. Earlier this month, US Rep. Marjorie Taylor Greene of Georgia announced she is “introducing a bill to make it illegal for children to be exposed to Drag Queen performances.”
In Florida, Ron DeSantis, the pro-Trump governor, signed a law opponents have called the “Don’t Say Gay” bill banning classrom discussion of sexual orientation or gender identity for young students. The Texas GOP just announced a new platform in which it claims President Joe Biden didn’t win the 2020 election, says that “all gun control is a violation of the Second Amendment and our God given rights,” urges the repeal of the Voting Rights Act and calls homosexuality “an abnormal lifestyle choice.”

In other words, there is a developed ecosystem here: Extremist elected Republican officials push outrageous legislation, while far-right militia groups use violence and intimidation to enforce public acquiescence to the same ideologies.

This development is made more troubling by the obsession with guns, and the increased acceptability of misogynist violence within some ranks of the Republican Party. Experts have, unsurprisingly, linked misogyny — the hatred of women — to violence against women.
At the same time, leaders in the Republican Party seem to look the other way when some party members are accused of violence.
In court filings, Greitens’ ex-wife has accused him of physically abusing her and their son. His attorneys have denied the allegations. Greitens, a former Navy SEAL, resigned as Missouri’s governor in 2018 following a series of scandals that included allegations of an affair and assault. He admitted to an affair but denied any wrongdoing.

And, of course, Trump notoriously bragged about grabbing women by their genitals — that’s sexual assault, but the GOP elevated him to the White House anyway.

In Alabama, Roy Moore nearly won a US Senate election in 2017 after multiple women accused him of preying on them as teenagers — but he enjoyed support from Trump and funding from the Republican National Committee even after the allegations, which Moore denied, came out.
In Nebraska, the Trump-endorsed candidate for governor has been accused of sexual assault by multiple women, including an elected member of his own party — accusations the candidate denies.
Herschel Walker, the GOP Senate candidate in Georgia, not only has a slate of undisclosed children despite his “family values” rhetoric, but his ex-wife told ABC News in 2008 he held a gun to her head and threatened to “blow your f’ing brains out.” (“I’m always accountable to whatever I’ve ever done,” Walker told Axios without fully addressing the violence accusations.)
This list goes on, with the party and even primary opponents of the accused candidates often ignoring or downplaying the accusations. The implications are clear: Being credibly accused of violence against women is not disqualifying to hold office as a member of the Republican Party.
Greitens has introduced this ad at a time when most political violence comes from the right, when mass shootings of Black grocery shoppers and Texas schoolchildren are the latest in a particularly American pattern of horror, when militias threaten acts of violence against fellow citizens and when lawmakers conduct hearings about a deadly armed insurrection that threatened the lives of then-Vice President Mike Pence and members of Congress.

This kind of violent and macho imagery and rhetoric — be a tough guy and hunt down those who disagree with you — is incredibly dangerous, particularly when American democracy is in such a fragile state, the public is badly divided, and politically motivated shootings and other attacks have become more common.

Greitens’ ad only fans the flames of violence. And, unfortunately, much of the Republican Party has shown little interest in snuffing out this rhetoric.