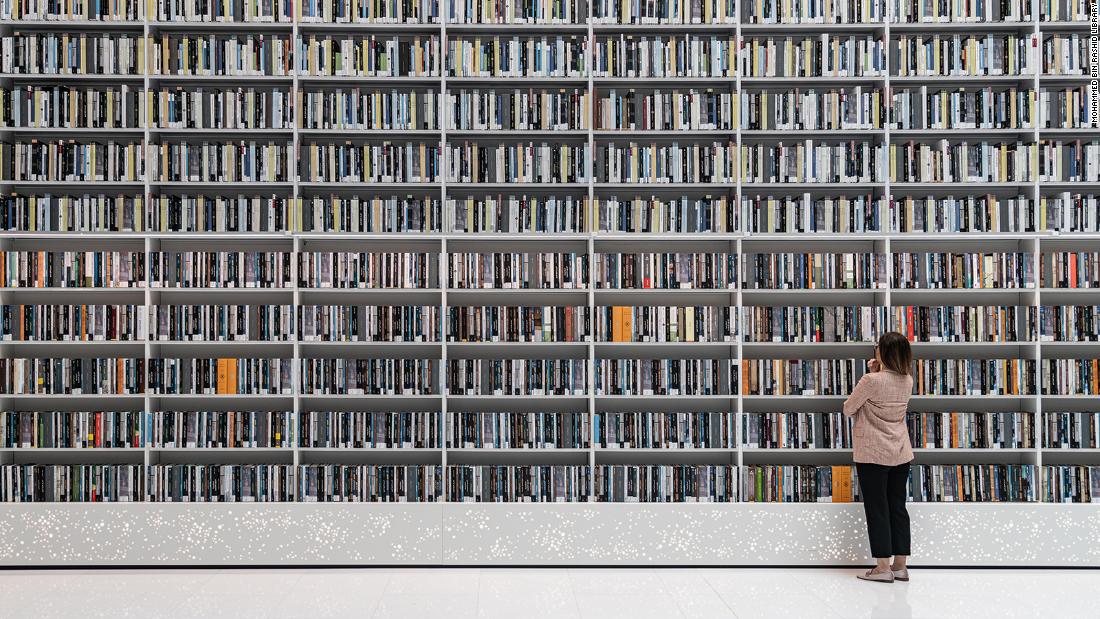 Editor’s Note — This CNN Travel series is, or was, sponsored by the country it highlights. CNN retains full editorial control over subject matter, reporting and frequency of the articles and videos within the sponsorship, in compliance with our policy.

But one of its most exciting new attractions — Mohammed Bin Rashid Library, which opened in June — is a beautiful oasis of calm contemplation, where visitors can curl up with a good book, plug in laptops for study or work, or marvel at the rare manuscripts and first-edition books displayed in the exhibition space on the seventh floor. Entry is free for all, locals and tourists alike, with tickets just needing to be reserved in advance.

Joining the pantheon of world-class book repositories alongside the likes of London’s British Library and Egypt’s Bibliotheca Alexandrina, the new library still has a Dubai-sized price tag, reportedly having cost one billion dirhams, around $272 million. It’s named after Sheikh Mohammed bin Rashid Al Maktoum, ruler of Dubai, who announced the construction of the new library in 2016. And with more than 1.1 million print and digital books housed in the 54,000 square-meter facility, it’s hoping to draw crowds who favor culture over consumption.

Located on Dubai Creek in Al Jaddaf, just next to the shipyards where artisans have been making traditional wooden dhows by hand for decades, the dramatic building looks like an open book, but is actually inspired by a rehl book rest used to hold the Holy Quran. The facility is home to nine separate libraries, dedicated to everything from media and the arts to business titles, international periodicals, maps and atlases, books for children and young adults, and a collection of precious archival treasures.

The collection of works is still being built, but it already boasts some impressive numbers. Alongside its multilingual print and digital books, visitors can access more than six million dissertations, 73,000 musical scores, 75,000 videos, 35,000 printed and digital international journals, and over 5,000 historical periodicals spanning 325 years.

And when you need a break from all that learning, there’s a cafe too.

Avid readers can happily spend hours browsing bookshelves and leafing through magazines. But, when compared to the city’s lineup of superlative sights, can the rest of Dubai be convinced? Jamal Al Shehhi, Emirati author, publisher and member of the new library’s board, certainly thinks so.

“A lot of people like shopping malls, but a lot of people like books too,” he says. “Dubai is known as a hub for business, trade and tourism, but now this iconic building is giving the message that the cultural background does exist in Dubai, and there is nothing better than books to deliver that message.”

During a Thursday morning visit, the library isn’t exactly packed, but it’s not empty either. Selfies are being taken against the vast — and vastly photogenic — walls of books in the light-filled lobby. People are wandering the spaces, many making a beeline for a specific section. Staff are setting up for an event later in the day, one of many that are open to the public to give those who may not be natural library-goers a reason to explore the facility. And while it’s not only a place for solitary bookworms, there are also those who are sitting snugly in big armchairs, deeply absorbed in the titles they’ve picked up.

There are iPads, but most children seem more captivated by the physical books.

On the ground floor, the Children’s Library, designed for 5 to 11-year-olds, is already a hit. When I visit, a group of giggling boys is sitting in front of Pepper, a humanoid storytelling robot, who tells them “We are officially friends!” before asking “How big is a coronavirus?”

Pepper’s manga-esque eyes and cheery voice make the robot a mesmerizing narrator, and it’s just some of the many features here — along with slides, climbing nets and tents — determined to prove to children that reading isn’t boring.

But it’s the physical books that have other kids in thrall. Around 17,000 titles currently fill the shelves in this library alone. From the little girl curled up in a circular reading nook entranced by the book in her hands to the boy sitting with his mother, using his finger to spell out words on pages made of real paper, it’s an encouraging scene. And it’s even more so when you notice that the shelf of iPads, installed for those for whom a paper book is a step too far, remains completely untouched.

A roller coaster for books

The Mohammed Bin Rashid Library is also blending tradition and tech. In addition to the collection of printed books is a database of thousands of digital titles that can be downloaded from machines in each of the nine libraries. There are books in braille for visually impaired readers, and a quiet space with reading pod for visitors with special needs.

But where the tech gets really exciting is in the Auto Book Store, a subterranean storeroom for the 400,000 titles that don’t appear on the library’s shelves.

Members can request a book via the library’s app (visitors can make use of the service at the information counters), which is subsequently communicated to the store, where a team of five speedy little red box-like robots searches, sorts and delivers a crate to the human operator.

A light illuminates the requested title inside the crate, which is then pulled out, scanned and dispatched on what looks like a mini roller coaster, zooming on rails from the basement up to the ground floor and the waiting reader.

An eclectic collection of literary treasures

The seventh floor is where the library’s collection of rarities is on display.

The library’s collection of books is eclectic, to say the least. If you want to learn about the architecture of the Yorkshire West Riding, how to fold origami in the shape of Star Wars characters, or “35 Glorious Years of Dubai Islamic Banking,” you’re in luck. And there’s an entire library dedicated to the United Arab Emirates, with a first edition of the first novel by an Emirati writer, Rashid Al Naimi, as well as practically everything ever published and printed in the country.

But it’s in the Treasures of the Mohammed Bin Rashid Library section, on the seventh floor, that the rarities sit. Al Shehhi describes it as being “just like Dubai” in the way that it incorporates diverse cultures. More a museum than a library, the collection includes rare manuscripts, calligraphy tools and first editions of great literary works, some of which date back to the 13th century. In the cartography section is a map of the Arabian Peninsula from 1662 by Dutch mapmaker Joan Blaeu, one of the first to show geographical features such as mountains, oases, trees and pearl banks.

There’s a first edition of Oscar Wilde’s “The Importance of Being Earnest” and a prototype of Chairman Mao’s “Little Red Book.” But perhaps the most apposite of all in our current times is Edward Jenner’s “An Inquiry into the Causes and Effects of the Variolae Vaccinae” (cowpox), a study of the work that pioneered the concept of vaccines, the book’s title being the origin of the term we use today.

As the library’s collection grows, there will be even more intriguing tomes to browse, and with 200 annual events and performances planned, the center aims to become a community in its own right. Perhaps it will be enough to tempt visitors to Dubai to turn over a new leaf and step away from the mall for an hour or two in favor of some literary stimulation.