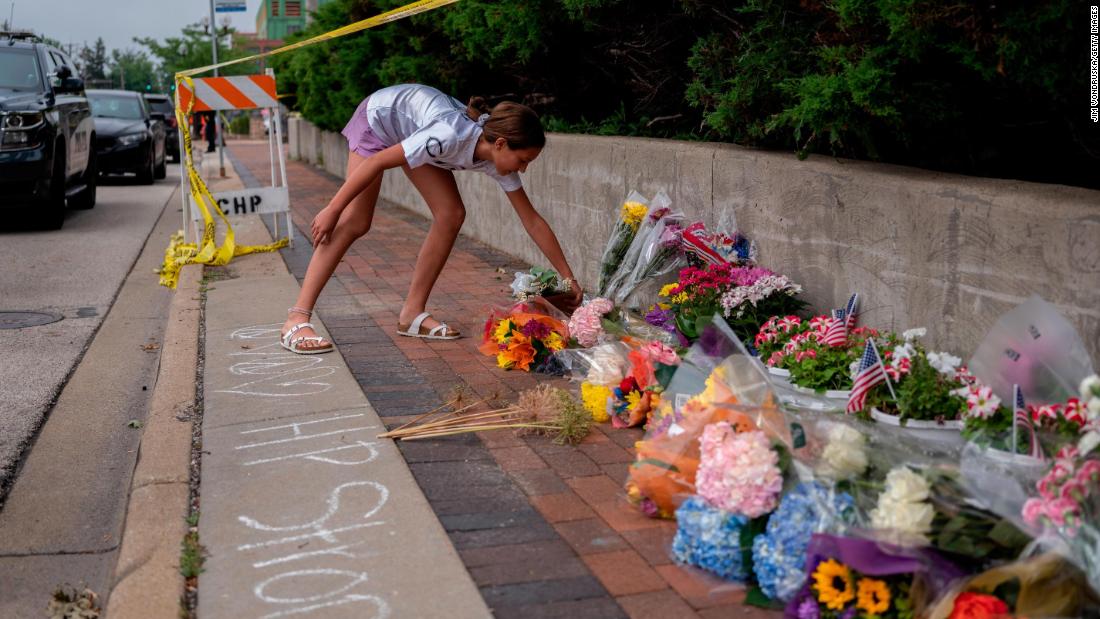 Lake County State’s Attorney Eric Rinehart said the gunman will face additional charges for those he wounded along with the seven counts of first-degree murder already filed.

“It’s vital to the healing of this community that every single victim receives justice,” he told CNN’s Wolf Blitzer Wednesday.

Residents have been paying their respects in the days following the shooting to those lost or wounded along the parade route, with some overcome with emotion, others kneeling in prayer.

Hundreds gathered at a candlelight vigil Wednesday night at nearby Everts Park, where a multitude of orange ribbons — signifying gun violence awareness — were seen hanging as “Amazing Grace” played on bagpipes.

As the grieving continues, more individuals are coming forward to share their experiences the morning of the shooting, including Lily Wathen, who was about to begin marching in the parade when gunfire broke out. Her grandparents were sitting “right across from where the shooter” was located, she told CNN.

“Every single year of my life, we’ve gone to this parade, and they wanted to be there specifically so that when I passed by in the parade, I would be able to find them there,” Wathen said.

Her grandfather was struck by shrapnel in his shoulder, barely missing his lungs, yet doctors say he will make a full recovery, she said.

The trauma of the event, however, has “shaken a lot of people up,” she said. “It’s hard to say how we’ll be in a year, but for right now, it’s scary to even think about going back.”

Two people wounded remain hospitalized at NorthShore University Health System facilities as of Wednesday afternoon and are in stable condition, according to spokesperson Jim Anthony. A total of 39 people had been earlier treated for injuries, he said, and an 8-year-old boy was transferred to UChicago Medicine Comer Children’s Hospital, which confirmed the child is in critical but stable condition.

Following the shooting in Highland Park, the gunman was able to leave the scene and “seriously contemplated” committing another shooting around Madison, Wisconsin, according to Lake County Major Crime Task Force Deputy Chief Chris Covelli.
The firearm believed to have been used in the shooting was recovered near the scene, but Crimo had another gun in his vehicle during his arrest, police said. The other weapon was a Kel-Tec rifle, Covelli said Wednesday. Crimo had approximately 60 rounds of ammunition in his car at the time, Covelli added.

When Crimo located another celebration in the Madison area, he “seriously contemplated using the firearm he had in his vehicle to commit another shooting,” Covelli said, though “indications are that he hadn’t put enough thought and research into it.”

On Wednesday, Madison Police Department Chief Shon Barnes said the FBI alerted his department Monday afternoon as Crimo was on the run that he may be in the area.

“We feel for the grieving families in Highland Park and all those forever impacted by the events of Monday’s shooting. We recognize tragedy very well could have taken place in our own community,” Barnes said in a statement.

After he was detained, Crimo “went into details about what he had done, he admitted to what he had done,” in voluntary statements given during questioning to Highland Park police, Covelli said. Crimo was appointed a public defender and is due in court again July 28.

Covelli again declined to address the suspect’s motive, telling reporters he didn’t want to go into specific details about what Crimo told investigators.

“However, he had some type of affinity towards the numbers 4 and 7, and the inverse was 7/4,” Covelli said, referring to Monday’s date, July 4. According to Covelli, Crimo’s affinity “comes from music that he’s interested in.”

Kevin McCarthy, 37, and his wife, Irina, 35, were two of the victims killed in Monday’s shooting. Their 2-year-old son, Aiden, was with them and had been protected from gunfire by Kevin’s body, Irina’s father and Aiden’s grandfather, Michael Levberg, told the Chicago Sun-Times.

Aiden “was pulled out from underneath his father, who was still bleeding, by good Samaritans,” Illinois Sen. Tammy Duckworth told CNN.

Dana and Greg Ring spoke to CNN’s Anderson Cooper Wednesday about caring for Aiden in the immediate aftermath of the shooting, when a woman — who was covered in blood and was having a hard time speaking — handed Aiden to them, they said. Aiden also had blood on him but the couple said it was apparent the blood was not from either the woman or child.

The Rings got to their car with Aiden and their children and pulled into a Highland Park fire station, where police “looked like they were getting ready for war with machine guns and helmets,” Greg Ring said.

The family left their contact info and took Aiden to Dana’s parents’ home for a couple of hours, where he was watching cartoons and not crying, they said. But Dana Ring said when she tried to talk to Aiden and asked his name, Aiden would say “Momma, Dadda come to get me soon.”

A detective later reached out and arrived at the residence, Greg Ring said, taking Aiden to a reunification center where he ultimately was reunited with other family members.

The Rings said they were grateful their children were alive and that “we just keep trying to remind them how very incredibly lucky we were … and we just have to keep focusing on that part of it,” Dana Ring said.