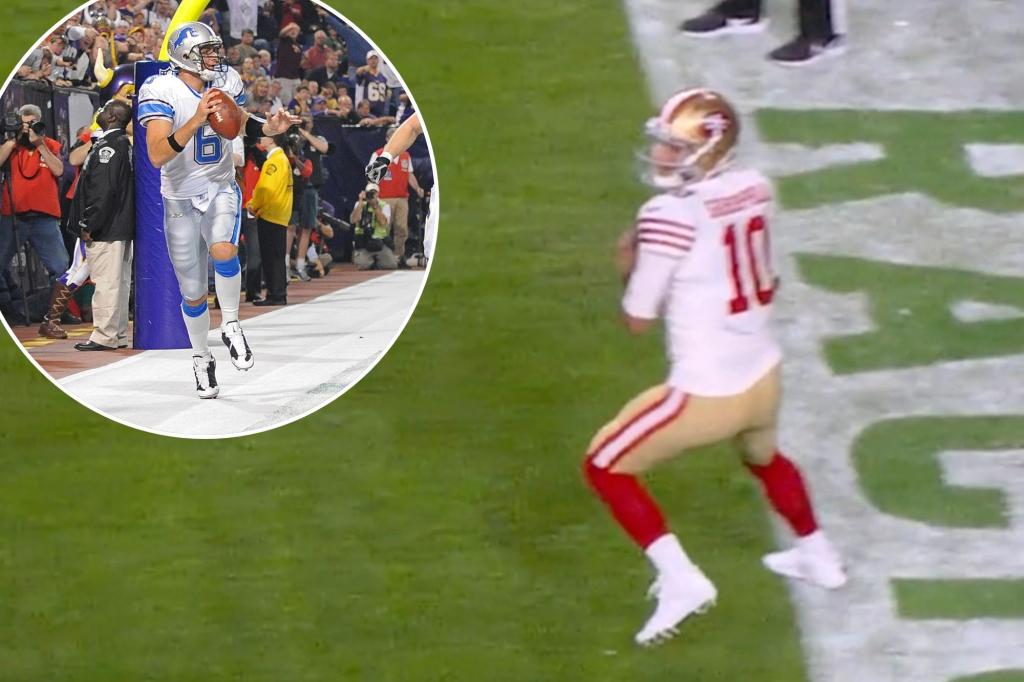 This is one torch Dan Orlovsky is more than happy to pass along.

During Sunday’s primetime matchup between San Francisco and Denver, 49ers quarterback Jimmy Garoppolo dropped back in his own end zone before stepping out of bounds, resulting in a safety.

Naturally, much of Twitter weighed in on the play, including Orlovsky, who famously ran in the back of the end zone and out of bounds in 2008 when he was the quarterback of the Lions.

“IVE NEVER BEEN HAPPIER,” tweeted the current ESPN analyst, who played in the league for 12 years. “FFFFREEEEEDDDOOOMMMM.”

Although the 49ers held a 7-5 lead after the safety — which turned out to be something of a blessing given Garoppolo’s pass was intercepted by Broncos linebacker Bradley Chubb — Denver rallied for an ugly 11-10 win.

49ers coach Kyle Shanahan shouldered the blame for Garoppolo’s safety in a postgame press conference, stating it “was a tough situation I put him in.”

“I wish we would have had time for the big play and could have ditched it. But that was a tough situation I put him in,” Shanahan said, per 49ers Web Zone.

The 49ers won’t have much time to dwell on Sunday’s missteps, as they’re set to host their NFC West rival Rams next Monday.

Garoppolo helped lead the 49ers to an NFC Championship berth last season against the Rams, who defeated San Francisco and eventually won the Super Bowl in February.

The 49ers are moving forward with Garoppolo under center this season after their starter, second-year quarterback Trey Lance, suffered a gruesome ankle injury in Week 2. Garoppolo previously reworked a deal with San Francisco, in which he would serve as Lance’s backup.