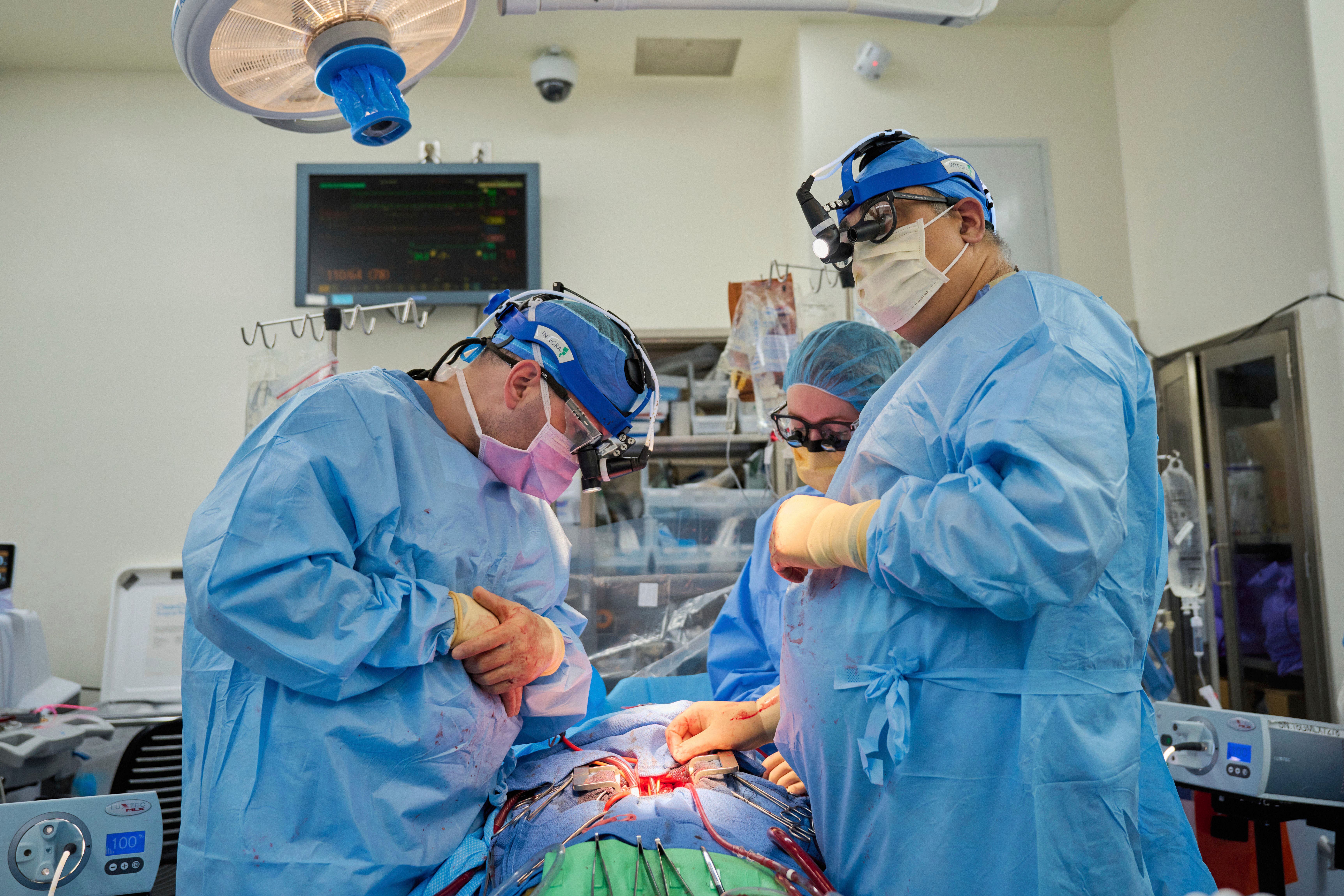 New York researchers transplanted pig hearts into two brain-dead people over the last month, the latest in a string of developments in the long quest to one day save human lives with animal organs.

The experiments announced Tuesday come after a historic but failed attempt earlier this year to use a pig’s heart to save a dying Maryland man – sort of a rehearsal before scientists try again in the living.

Among the lessons: Practice with the deceased is important.

“We learned so much from the first one that the second one is much better,” said Dr. Nader Moazami, who led the operations at NYU Langone Health. “You stand there in awe” when the pig heart starts to beat in a human body.

Dr. Nader Moazami, right, and cardiothoracic physician assistant Amanda Merrifield, center, and other members of a surgical team prepare for the transplant of a genetically modified pig heart into a recently deceased donor at NYU Langone Health on Wednesday, July 6, in New York.
(Joe Carrotta/NYU Langone Health via AP)

This time around, Moazami’s team mimicked how heart transplants routinely are done. Once last month and once last week, researchers traveled to a facility housing genetically modified pigs, removed the needed hearts, put them on ice and flew them hundreds of miles back to New York.

They used special new methods to check for any worrisome animal viruses before sewing the heart into the chest of each deceased recipient – a Vietnam veteran from Pennsylvania with a long history of heart disease and a New York woman who’d benefited from a transplant earlier in life.

Then came three days of more intense testing than living patients could tolerate – including frequent biopsies of the organ – before doctors disconnected life support.

Already the Food and Drug Administration is considering whether to allow a small number of Americans who need a new organ to volunteer for rigorous studies of either pig hearts or kidneys. NYU Langone is among three transplant centers planning trials – and has a meeting planned with the FDA in August to discuss requirements.

Testing in the deceased could help fine-tune how the first trials in the living are designed, said Dr. David Klassen of the United Network for Organ Sharing, which oversees the nation’s transplant system.

“They serve as an important sort of stepping stone,” said Klassen, who wonders if researchers next might consider tracking the organs for a week or so in a donated body rather than just three days.

Animal-to-human transplants, what scientists call xenotransplantation, have been tried for decades without success, as people’s immune systems almost instantly attacked the foreign tissue. Now, pigs are being genetically modified so their organs are more human-like – increasing hope that they might one day help fill a shortage of donated organs. More than 100,000 people are on the national waiting list for a transplant, most of them kidney patients, and thousands die every year before their turn comes.

The most ambitious attempt so far came in January, when doctors at the University of Maryland Medical Center transplanted a pig heart into a dying 57-year-old. David Bennett survived for two months, evidence that xenotransplantation was at least possible. But initial testing missed that the organ harbored an animal virus. What caused Bennett’s new heart to fail and whether that virus played any role still isn’t known, the Maryland researchers recently reported in the New England Journal of Medicine.

Months earlier, the NYU team and researchers at the University of Alabama at Birmingham separately were testing pig kidney transplants in the deceased, people who’d donated their bodies for science.

NYU’s recent heart experiments will add to the evidence as the FDA decides whether to allow formal studies in living patients.

A genetically modified pig heart is transplanted into a recently deceased donor at NYU Langone Health on July 6 in New York. Experiments are raising new hope that pigs might one day help fill a shortage of donated organs – at least, for people who need a new heart or kidney.
(Joe Carrotta/NYU Langone Health via AP)

But NYU Langone’s Dr. Robert Montgomery, a kidney transplant surgeon who received his own heart transplant, said continuing careful experiments in the deceased is critical to figuring out the best methods “in a setting where a person’s life isn’t at stake.”

“This is not a one-and-done situation. This is going to be years of learning what’s important and what’s not important for this to work,” said Montgomery, who has a list of almost 50 people who’ve called desperate to volunteer for a pig kidney transplant.

The FDA hasn’t signaled how soon it might decide whether to allow such studies. At a recent two-day public meeting, the agency’s scientific advisers said it was time to try despite a long list of questions. They include how best to modify the pigs, as several biotech companies – including Revivicor, which supplied the NYU organs – are pursuing different options.

It’s not even clear which organ to attempt first in a clinical trial. If a pig kidney fails, the patient can always survive on dialysis. Yet some of the FDA’s advisers said starting with the heart might be better. Experiments with pig kidneys in deceased humans showed the organs produced urine. But still unknown is whether pig kidneys do another important job – processing medications – the same way human kidneys do.