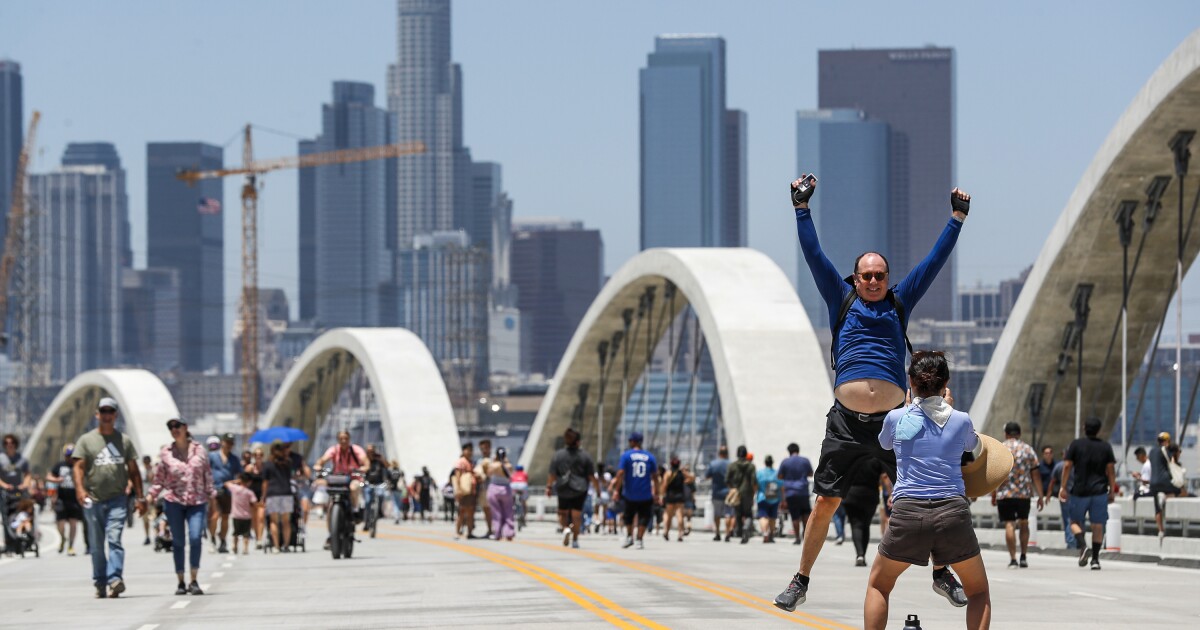 Thousands of pedestrians, bicyclists, roller skaters, skateboarders and others converged on the new 6th Street Viaduct on Sunday to celebrate the official opening of the instantly iconic bridge that connects downtown Los Angeles to the city’s historic Eastside.

The bridge opened six years after construction began to replace the old viaduct that had served as a beloved Los Angeles landmark for nearly a century. The sweltering heat and cloudless sky didn’t deter the crowds from taking in the dramatic view of the downtown skyline before the bridge opened to vehicles for the first time.

The $588-million bridge, which spans the Los Angeles River and connects downtown to Boyle Heights, was open to pedestrians and bicyclists from 11 a.m. to 4 p.m. Sunday. It then closed andwill reopen to motorists at 7 p.m. A two-day celebration began Saturday with food truck vendors and musical performances.

With its 10 pairs of tilted arches, the new bridge — dubbed the “Ribbon of Light” because of the thousands of multicolored LED lights that will illuminate the structure at night — has already taken its place alongside landmarks such as the Hollywood sign, the Theme Building at LAX and Chris Burden’s “Urban Light” assemblage at the Los Angeles County Museum of Art.

On Sunday, Angelenos marveled and gawked at the 3,500-foot-long bridge’s massive arches and inspected its winding ramps and pedestrian walkways. Some wondered how protected bicyclists would be.

“The layout is perfect,” Stevi Hardy said to her friends as she contemplated the design. “I wish the bike lane was more permanent. It would just be safer if there was a cement protection.”

The bike path is protected by plastic bollards with low rubber stoppers. A car had already rolled over one, according to a tweet.

Hardy and her husband are members of the Montebello Bicycle Coalition and trekked to the bridge with friends from various parts of Southeast Los Angeles County. Their son, Miller, who is 2, offered a thumbs-up from his shaded bicycle seat before doing his best Spider-Man impression, shooting a pretend web.

The bridge is a “love letter to the city,” Mayor Eric Garcetti said Friday. The new viaduct, designed by architect Michael Maltzan, replaces a deteriorating Depression-era Art Deco bridge that served as a monument for Angelenos before it was torn down in 2016.

The cycling group recalled the old bridge’s past and some of the movies that were shot there — “Grease,” “Terminator 2″ and “Repo Man.” They also contemplated how the new bridge’s aesthetic would align with the others that crossed the river. One woman posed a concern for its future as the city faces a growing homelessness crisis.

“How are they are going to prevent the homeless encampments up here?” Isabel DeLuna said.

Vendors sold ice cream, cotton candy and fruit. One man sat on the concrete wall protecting the pedestrian paths and sketched the bridge in a small book.

Nostalgia for the old mixed with excitement for the new. At the bridge’s western entrance, about 30 runners from the Boyle Heights Bridge Runners wore shirts emblazoned with an image of the old bridge. Their readiness to tour the new space was evident as the crew met up with the Skid Row Running Club.

“The old bridge was in need of TLC,” runner Rolando Cruz, 39, said. The new bridge includes a relatively wide pedestrian walking path — or in Cruz’s case, a running path. “You have to fight for things like this to feel safe and secure.”

Near the bridge’s eastern entrance at Whittier Boulevard, 7-year-old Olivia Roberts leaned against her chromed-out lowrider bike and offered a review of her own:

“It was good and very high up.”

Her mom, Ashley Almaguer, laughed. She was there when the last bridge closed and thousands of people came to pay their respects during that “bittersweet moment.”

Almaguer’s family is from Boyle Heights, and she knew the old bridge meant something to them. What now stands in its place pleased her.

“They did a good job. It goes with times we were in — that we’re growing as a society.”

Rudy and Lupita Montalvo returned to their former home of Boyle Heights to marvel at the new structure. The couple lived in the neighborhood for decades before moving to Cudahy three years ago. Rudy, 85, still considers it home.

He loved ogling cars that once lined the mouth of the bridge and had flashbacks to a black 1949 Chevrolet Fleetline that a younger version of himself used to drag-race. Some nights, those joyrides took him over the old 6th Street bridge.

“I’m always going to miss the old bridge,” he said. “But the old bridge didn’t have features like a park or walking lanes or a bike lane. ”

He spoke with reverence about his old neighborhood and the pride he has in this city. He thinks he’ll return again.

“I’m going to be coming here until the day the good Lord calls me.”

On the bridge’s western side, one man stood out among the crowd. Decked in a garb that called to mind people who predated modern history, Jesus Negrete — better known as Don Chuy — wore native Aztec garb and had bike and a peace sign painted on his breastplate. He dressed this way to stand out and remind people of who lived here first. Carrying a rattle with his name written on it, each shake was intended to evoke the beating heart.

The 67-year-old Jalisco, Mexico, native has lived in Los Angeles for 40 years fixing garment cutting machines. He remembered the old bridge — its arc was particularly evocative for him. He believes the new one will last long after he’s gone.

“It almost feels like I want to cry,” he said. “I hope this bridge will stay forever.”