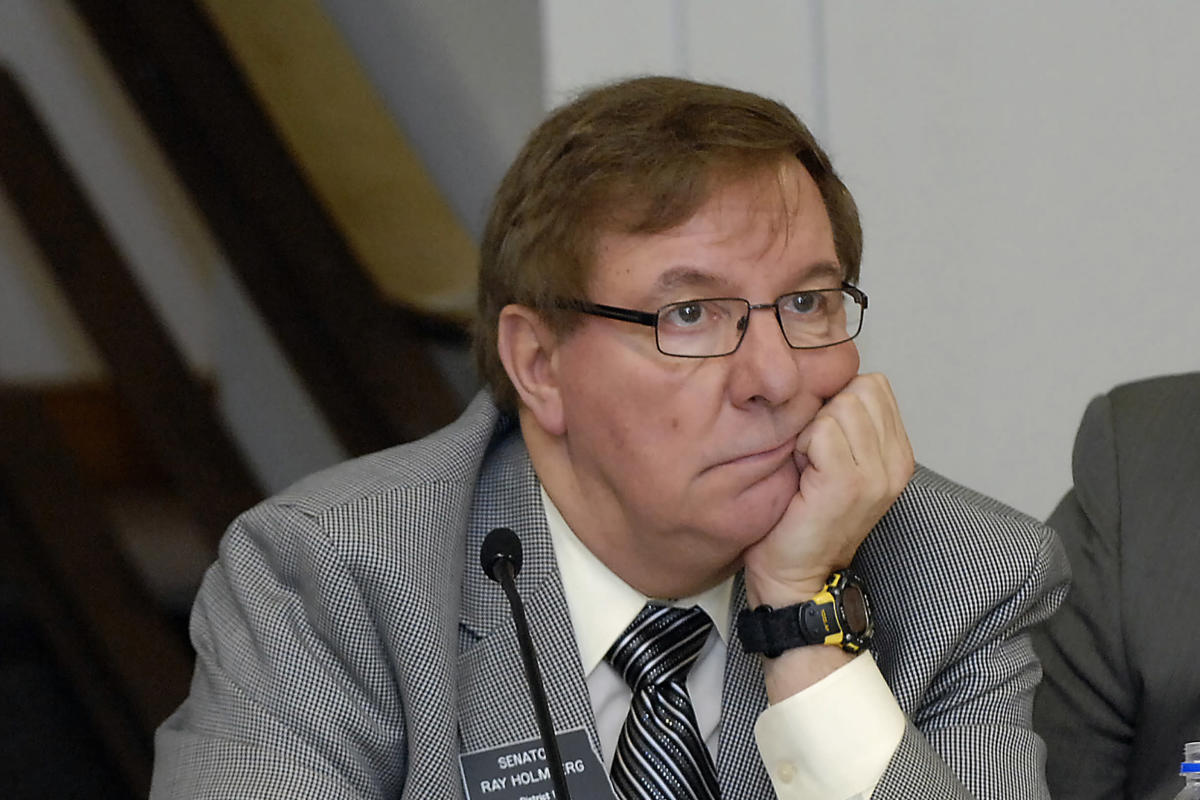 BISMARCK, N.D. (AP) — North Dakota’s longest-serving state senator resigned Wednesday as head of a powerful panel that oversees the Legislature’s business between sessions, just days after a published report that he had exchanged scores of text messages with a man jailed on child pornography charges.

Holmberg will remain on the panel, but not as its chairman.

“No further comments on this announcement will be forthcoming,” his statement said.

He had announced in March he would not seek reelection.

The Forum of Fargo reported Friday that Holmberg exchanged 72 text messages in August with Nicholas James Morgan-Derosier as Morgan-Derosier was held in the Grand Forks County Jail. The newspaper cited a jail log it obtained through a records request showing the time and date of the text messages.

Morgan-Derosier was held at the time on state child pornography charges. Holmberg first told the Forum that he had read a newspaper story about the charges, then in a later interview said he had not, the Forum reported.

Holmberg declined to speak with The Associated Press, and in a text referred all questions to his attorney, Mark Friese of Fargo.

Friese, a prominent North Dakota criminal defense attorney, said Tuesday that Holmberg hasn’t been charged with any crime, and there is no indication that he will.

“I know he was in the senator’s employ,” Friese said of Morgan-Derosier. “The fact that (Holmberg) knew him doesn’t say a lot in my view.”

Democratic Party Chairman Patrick Hart had called for Holmberg to step down from Legislative Management and to publicly release the text messages.

Holmberg was chairman of the Legislative Management committee four times during his 46-year tenure in the Legislature. The 17-member panel decides committee assignments and choses study topics that often inspire legislation.

Holmberg, a retired school counselor, announced in March that he was retiring from the Legislature, a move that came as a surprise to many lawmakers and others at the state Capitol.

“At age 79, the stress of a session and a campaign will only exacerbate a weakened ability to concentrate on the matters at hand and effectively recall events,” Holmberg said in a statement at the time.

Gov. Doug Burgum, the state’s congressional delegation, state lawmakers and others showered Holmberg with accolades at that time.

GOP Senate Majority Leader Rich Wardner said the only thing Holmberg can be accused of at this point is a lapse of judgement. Wardner said he spoke with Holmberg Wednesday, before Holmberg stepped down as the committee chairman.

Wardner would not disclose details of the call.

“He sent 72 messages to a bad, bad person,” Wardner said. “That’s not illegal and until there is more information I think (Holmberg’s resignation) is a step in the right direction.”

“If there is any evidence of any wrongdoing we will act and we will act quickly,” Wardner said. “Right now, all we have is that it looks bad.”

Holmberg also sits on the state’s Emergency Commission, which allocates funding and resources in times of an emergency. The commission is comprised of the governor, the secretary of state, the chairmen of the state House and Senate appropriations committees, and the majority leaders of the House and Senate.

Wardner said he would not push to have Holmberg removed from that panel at this time.

Pollert said Holmberg’s decision to step down as chairman of the committee “was the right thing to do.”

“Sen. Holmberg has his things he needs to deal with and we don’t want it to be a distraction from the Legislature,” Pollert said.

The state charges against Morgan-Derosier have been superseded by federal charges that include possession and distribution of child pornography and travel with intent to engage in illicit sexual conduct.

Prosecutors allege Morgan-Derosier possessed several thousand images and videos depicting sexually abused children. He also is accused of taking two children under the age of 10 from Minnesota to his Grand Forks home, with the intent of sexually abusing them.

This version corrects the details on legislative leadership pay.