NBA will pay former ABA players $25 million: ‘This will be life changing for them’ 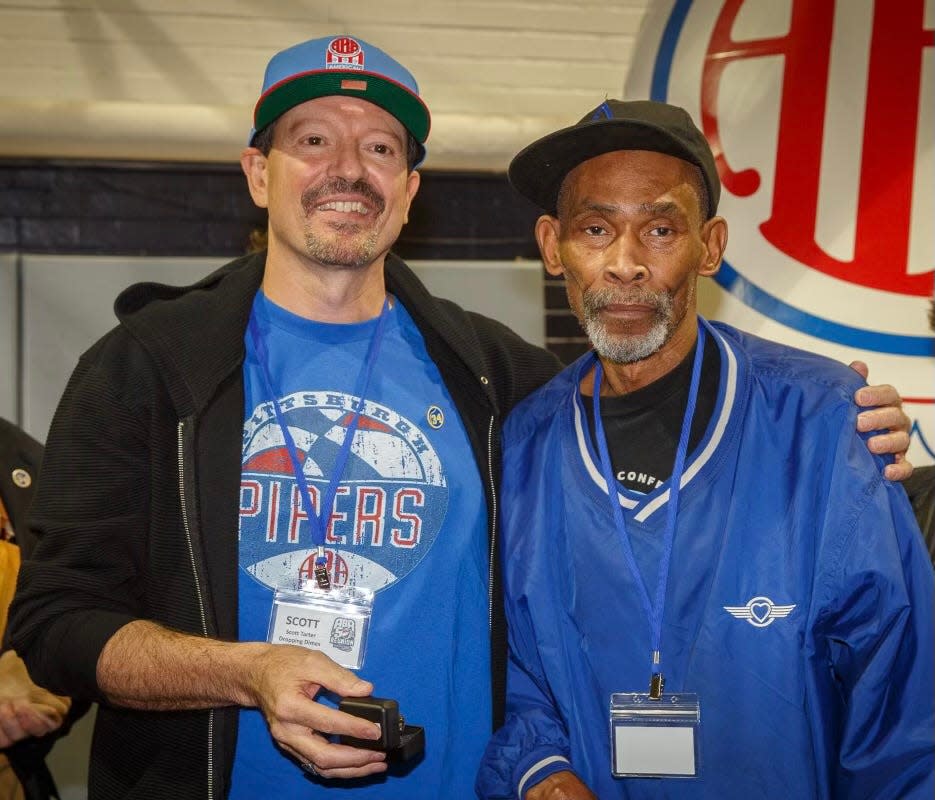 INDIANAPOLIS — The NBA board of governors voted Tuesday to pay $24.5 million to former American Basketball Association players, many of whom are struggling to pay rent, medical bills and buy the basic necessities to live.

The agreement reached by the NBA and its players association ends a years-long battle launched by the Indianapolis-based Dropping Dimes Foundation.

Dropping Dimes, a non-profit founded in 2014 to help struggling former ABA players and their families, has been pleading with the NBA to give players of the now-defunct ABA the money it says they deserve.

About 115 players are eligible for the payout, which the NBA is calling “recognition payments,” not pensions. Those players either spent three or more years in the ABA or played at least three combined years in the ABA and NBA and never received a vested pension from the NBA.

The agreement pays players an average $3,828 annually for each year they were in the league. For example, a player with the minimum three seasons will receive $11,484 a year. A player with the most years of service, such as Freddie Lewis who has nine, will get $35,452 a year.

“It’s an incredible day for former ABA players,” said Scott Tarter, CEO and founder of Dropping Dimes, “one that we and the players have been hoping for and working so hard toward for many years.”

The money to fund the ABA payments is a 50-50 split between the NBA and the NBA Players Association.

“Our players have a genuine sense of appreciation for those who paved the way and helped us achieve the success we enjoy today,” said Tamika Tremaglio, NBPA executive director. “We have always considered the ABA players a part of our brotherhood and we are proud to finally recognize them with this benefit.”

After the vote, NBA commissioner Adam Silver said the players and team governors “felt a need to act on behalf of these former ABA players who are aging and, in many cases, facing difficult economic circumstances.”

“These pioneers made meaningful contributions to help grow the game of professional basketball and we all believe it’s appropriate to provide financial recognition to this group for their impact.”

‘This means so much to them’

Tarter was in a warehouse alone surrounded by ABA memorabilia when he got the call from the NBA last week. A call he had been waiting for.

“I was literally shaking,” Tarter said. “Is this really happening?”

While the NBA did not give ABA players everything Dropping Dimes had asked for — covering all 140 living former ABA players and paying $400 a month for each year of play — Tarter said he is still celebrating.

“In some ways, we feel these aging ABA players, who broke so many barriers in the 1960s and 70s, deserve even more recognition,” he said. “But I can’t overstate how much it means to them to have the NBA and NBPA recognize their tremendous contributions to today’s NBA game.”

What the NBA approved gives 3-year players about $957 a month, rather than the $1,200 Dropping Dimes had asked for. For some, that’s still not enough, said Tarter, who expects many players will still be turning to Dropping Dimes for help.

In other situations, the money will be life changing for these players, he said.

Tarter points to Bird Averitt, who won an ABA championship with the Kentucky Colonels in 1975. When he died in 2020, he was using kerosene to heat his home because he couldn’t afford to pay the electric bill.

There are many former players in similar situations or even worse off than Averitt, Tarter said.

When the ABA merged with the NBA in 1976, just four ABA teams were absorbed, leaving many players suddenly without paychecks, health insurance and pensions.

Beyond the financial help the NBA deal provides, it gives honor to the pioneers of the professional game, Tarter said.

“This means so much to them personally,” he said, “from the standpoint of their own legacy in basketball.”

‘Not asking for a hand out’

IndyStar published a story last year revealing that 80% of former ABA players struggling financially are Black. Those are the players coming to Dropping Dimes for help.

Those players blazed the trail for what the NBA game is today, fast-paced with 3-pointers and slam dunk contests, and they deserved something for that, Tarter said.

He and his organization have been on a mission to get the NBA “to do the right thing,” Tarter said.

The former ABA players are now in their late 60s, 70s and 80s. Some are homeless, living under bridges. Some die alone with no money for a gravestone. Others can’t afford dentures or a new suit to go to church.

More than 10 players on Dropping Dimes’ pension list, now 140, have died in the past three years. Time was a factor in pushing the NBA to act, Tarter said.

“As far as this pension thing, the NBA is waiting for us to die off,” Frank Card, who played for the ABA’s Denver Rockets, told IndyStar in February 2021.

At the time, Card was a retired public bus driver, living in a rented apartment. The pension would have meant a different life for him.

“I’m not asking for some kind of hand out or something I didn’t work for or deserve,” Card said. “I don’t know why these guys don’t step up and say, ‘Why shouldn’t we take care of them like they took care of us?'”

After the article published, the NBA spoke publicly on the issue for the first time, saying it was in discussions with the Dropping Dimes Foundation on pensions for former ABA players.

The discussions weren’t soon enough for Card, who died two months later at 76. In lieu of flowers, his obituary asked that donations be made to Dropping Dimes.

Former ABA player Sam Smith died while waiting for a pension from the NBA and left a chilling photo behind. George Carter died penniless with no family. Many other players who had sought help from Dropping Dimes died as they waited for a decision from the NBA.

When the ABA disbanded in 1976, merging with the NBA, four of its 11 teams were absorbed by the NBA — the Pacers, Nuggets, New York Nets and San Antonio Spurs. Many players were left with no pension, salaries shut off and health insurance gone.

“They’ve just been forgotten about,” Tarter said in 2021.

He is retired from a job as a newspaper truck driver and lives in subsidized housing in Atlanta. He said he has been forced to ask for financial help many times in recent years.

“A pension, there’s a lot of things it would go toward,” said McHartley, who during his career played for the ABA’s Miami Floridians, New York Nets and Dallas Chaparrals. “Car insurance, upkeep on your car, food intake, rent. So, it’s a lot of things that would help out with your overall living.”

Dropping Dimes heard from McHartley and so many other former players. Through its eight years, the foundation has helped with little things — gas money, a new suit for church, a rehab session.

And it has helped with big things — funeral expenses, major medical bills and rent.

And now, Dropping Dimes has helped get these players what they needed most.

“This, these pensions, has been our big mission from Day 1,” Tarter said. “This, what is happening now, getting these guys what they deserve.”

Dropping Dimes has an advisory board backed by big names in sports, media and basketball. Among them are Bob Costas, Reggie Miller, George McGinnis, Julius Erving, Myles Turner, Peter Vecsey and Bob Netolicky.

But one name on the board (now in memoriam) is Mel Daniels, and he was the fiercest fighter that Dropping Dimes had, Tarter said.

As Tarter sat in that ABA warehouse downtown last week on the call with the NBA, he said he looked up to the ceiling and thought of Daniels.

“I literally looked up as I was listening to this and I felt like I was talking to Mel,” he said. “Too bad Mel is not here to see this in person. This was his idea all along, saying, ‘We’ve got to do something for these guys.'”

As Daniels helped former player Charlie Jordan pick out a new suit in 2015, he talked to IndyStar about how sad it was to see his league- and teammates suffer.

“There are some ABA players living under bridges,” he said. “They don’t have anything. People don’t know how bad off they are.”

That includes former ABA players, like Randy Denton, who had no idea the men he played with were struggling.

“I didn’t stay in touch with anybody and then this thing bubbles up some years ago and my first thought is, ‘I’m so sorry,'” said Denton, who played five seasons in the ABA and a year in the NBA  “It was emotional seeing those guys suffer.”

Denton started following the plights of the players and felt helpless.

“I’m not as bad off as some of these guys. I read these stories and I just cried. I wished I had a million dollars to give them,” he said. “I knew these guys. I played with these guys.”

While Denton knows the money will help other players more than him, he also said money is not the only reason this NBA deal matters.

“The financial benefit will be life changing to many of these former players, who were paid so much less when they played,” Tarter said. “That said, not every former ABA player qualifies for the recognition benefit and there will still be players in need.”

“Dropping Dimes is rededicating itself to continue to assist as best we can, with the respect and dignity these players deserve for what they’ve done for their sport,” he said. We’re a small operation, but we’re a determined group.”