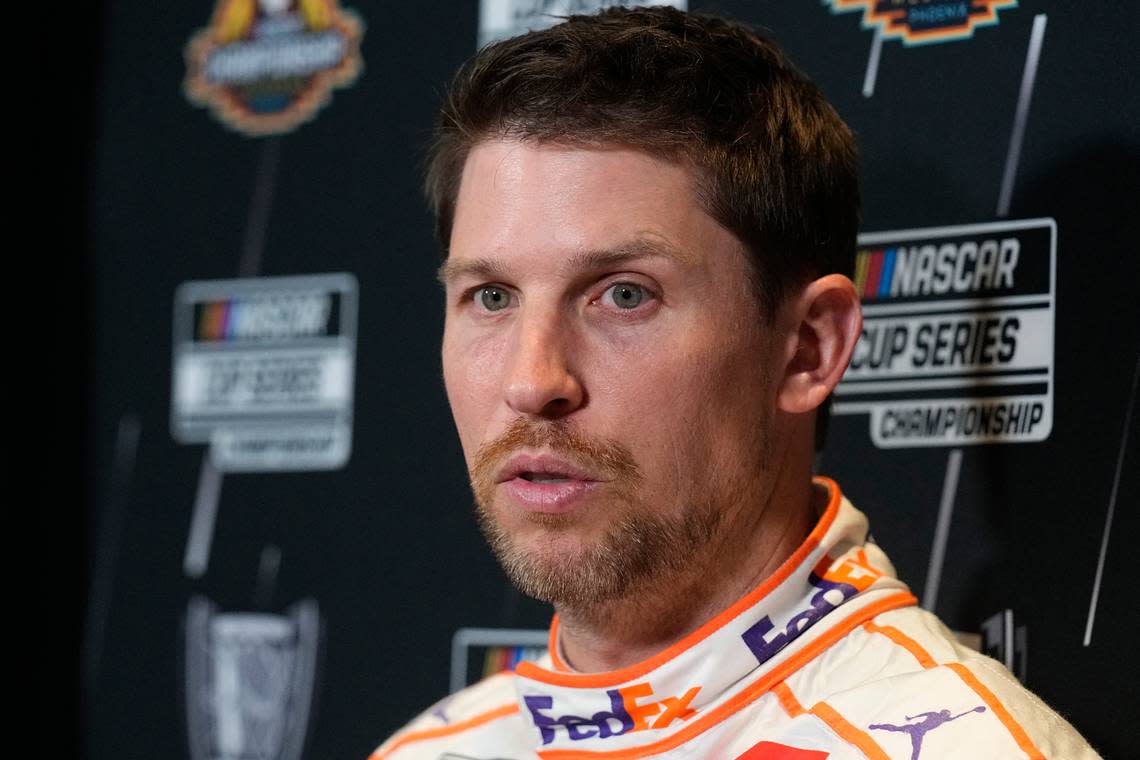 The name “Kyle Larson” appeared over the driver in the cartoon. Larson is half-Japanese.

The clip was then edited to show the finish of Sunday’s race at Talladega Superspeedway, in which Larson moved up a lane while driving his No. 5 Chevrolet battling for the win approaching the start-finish line. Upon doing so, Larson took out both of Hamlin’s 23XI cars by hitting the No. 45 Toyota driven by Kurt Busch, who rammed the outside wall after contact and immediately bounced into the No. 23 Toyota driven by Bubba Wallace.

Hamlin issued an apology and removed the thread late Monday night, writing on Twitter, “I took down a post I made earlier today after reading some of the comments. It was a poor choice of memes and I saw how it was offensive. It came across totally wrong. I apologize.”

A NASCAR spokesperson said Tuesday afternoon that NASCAR alerted Hamlin that he must complete sensitivity training and the process must be started by the end of the week.

In a thread issued immediately after the first tweet, Hamlin wrote, “Let me say this. I tweet because A it’s funny as sh*t. B because we are friends.”

The final tweet in the thread said, “Oh and C. Yes I’m aware I wrecked him at Atlanta… lighten up people!!! Have a laugh and enjoy the day.”

NASCAR’s Member Conduct guidelines state that, “NASCAR Members shall not make or cause to be made a public statement and/or communication that criticizes, ridicules, or otherwise disparages another person based upon that person’s race, color, creed, national origin, gender, sexual orientation, marital status, religion, age, or handicapping condition.”

The tweet stereotyped Asians and Asian Americans, and some in that community said that they found the clip offensive.

“For those who aren’t Asian, of course, the clip and tweets were funny and an instance of those who did not like his tweets as being soft, not being able to take a joke,” wrote The Podium Finish writer Rob Tiongson, who is Filipino American. “ … A joke about a race or ethnicity is not a joke at all. Defending a tweet that minimizes and demeans a race or ethnicity simply because of a friendship or it being funny does not make it OK.”

Hamlin’s Joe Gibbs Racing teammate Kyle Busch completed mandated sensitivity training prior to the start of the 2022 season after using a derogatory term for individuals with intellectual disabilities when speaking to media members after a race last year. He did not miss competition for the sensitivity training.