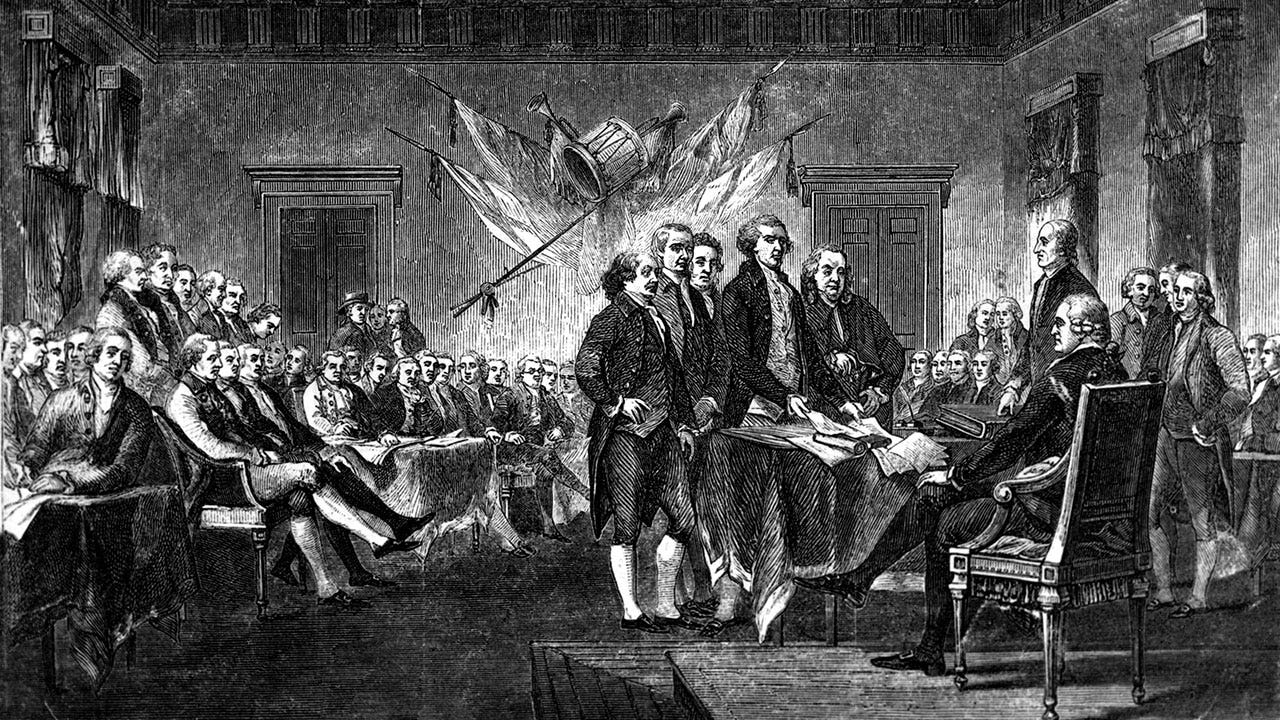 During MSNBC’s “Why is This Happening?” podcast Tuesday, a law professor told host Chris Hayes the Founding Fathers “don’t represent us in any meaningful way” and that originalism – the concept that the Constitution should be interpreted as it was written – is not “any different from the monarchy.”

The podcast featured a discussion about the Supreme Court with Jamal Greene, a Columbia Law Professor and co-chair of Facebook’s Oversight Board, which deals with content moderation on the platform. Greene was harshly critical of originalism.

HAWLEY, LAW PROFESSOR CLASH IN EXCHANGE OVER WHO CAN GET PREGNANT: ‘IS THIS HOW YOU RUN YOUR CLASSROOM?’

“That’s the challenge, and that challenge is spectacularly failed by originalism,” he continued. “Originalism doubles down on the problem of these people don’t actually represent us in any meaningful way,” he said of the Founding Fathers.

Greene said that “we actually have to take some ownership over” the Constitution and “have some agency or we’re not a democracy.”

“If you say a bunch of people, who are not a majority by the way, a bunch of white men are gonna get together and craft a document, tell us what all the rules are, and tell us the only way you can amend this document is if you’re basically unanimous, but we’re not unanimous. We’re just a minority of the population,” he said.

“Either say we don’t live in a democracy – whatever, we just live by the 18th century old rules which I don’t see how that’s any different from the monarchy or something else – or you say well maybe there’s a way of thinking about this document that actually does give us some agency in the present,” Greene continued.

Despite Greene’s assertions, there is a way to amend the constitution while still adhering to originalism – the passage of amendments. While constitutional amendments are not easy to pass, leftist legal scholars have said living constitutionalism theory – the idea that “the Constitution is living and can evolve with society” – can be used by unelected judges to advance causes that they deem appropriate at their discretion.

Such a flexible Constitution can have devastating impacts on liberty and personal freedoms, originalists argue. Originalists believe that a society’s evolving values should be reflected in the legislatures via the democratic process.

Greene said that originalism is “an affront to self-governance, it’s offensive, it denies the pluralism that didn’t exist before our recent history” and added that “it’s problematic along any number of dimensions. Nothing about this is required, it’s not conservative, it’s reactionary, in the sense that it’s rejecting our traditions in order to go back to a kind of fantasy of several generations before.”

Greene also said that the Second Amendment “was put into the Constitution solely by White men in the 18th century when people are using muskets and there’s no standing army and there’s no police forces and so forth.”

“We have some options for how we think about constitutional interpretation and some of those options are consistent with the fact that we are a different people now than we were in the 18th century and some are not,” he added. “The idea that this comes down in some way to the popular sovereignty of Americans in the 18th century, that’s just bogus.”

Hayes agreed with Greene. “Yea it’s a crazy notion. It’s almost self-evidently ludicrous,” Hayes said. “Obviously I’m biased, but the feeling that I have at the end of this [Supreme Court] term is this sort of this claustrophobic feeling,” he added.

“The 6-3 majority with lifetime tenure, it just feels like – I feel like I’m in a room with the walls closing in and I’m not someone whose body is on the line, I just feel this as a, you know – politically, I’m not someone who just had their literal reproductive autonomy taken away,” he said.

The Supreme Court has come under unprecedented attack lately, with Florida Governor Ron DeSantis, a Harvard Law School graduate, describing the leak of the abortion decision in May as “judicial insurrection“.