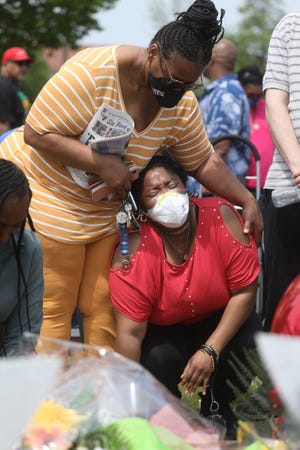 As the gunman fled down an alley after the deadly mass shooting scene he’d created at a July Fourth parade in suburban Chicago, an object fell from his black bag. It was a high-powered Smith & Wesson M&P 15 semi-automatic rifle, Illinois prosecutors said Wednesday in Lake County court.

AR-15-style semi-automatic rifles or similar guns were used in at least six of the 14 mass shootings so far this year in which four or more victims died, according to the Gun Violence Archive. In eight of those shootings, information was unavailable about the types of guns used.

But while semi-automatic rifles have become more widely used over the past decade, handguns remain the most common type of gun used in mass shootings, experts told USA TODAY.

Most guns used in mass shootings — including those owned by Crimo — were legally obtained, according to The Violence Project’s mass shooting database.

Here’s what to know.

Handguns have overwhelmingly been the gun used by perpetrators since the Rockefeller Institute of Government’s Regional Gun Violence Research Consortium began tracking mass shootings occurring within the past 50 or so years.

The consortium considers mass shootings any event where targeted violence is carried out by one or more shooters in a public place, and multiple victims — including injuries and fatalities — are chosen at random or for symbolic value.

Over the last five decades, handguns were typically used 3-to-1 in mass shootings, said Jaclyn Schildkraut, interim executive director of the consortium.

According to The Violence Project, 78% of mass shooters used at least one handgun since 1966. The group keeps its own database and defines mass shootings as events in which four or more victims were killed, not including the shooter.

Experts from both groups, however, are noticing a shift.

“Over the last decade or so, we have seen an increase in the use of semi-automatic rifles,” Schildkraut told USA TODAY.

At least one assault weapon has been used in about 44% of mass public shootings since the July 2012 movie theater massacre in Aurora, Colorado, whereas across the previous five decades, an assault weapon was used in almost 21% of mass shootings, said James Densley, co-founder and president of The Violence Project.

HIGHLAND PARK VICTIMS:Loved ones will gather Friday in first funeral services after shooting

What’s behind the rise of semi-automatic weapons?

Louis Klarevas, a research professor at Columbia University’s Teachers College, agreed that the potential for a high death toll may play a factor for shooters but said it’s hard to say with certainty.

What is a semi-automatic rifle?

ArmaLite rifle, not “assault rifle,” represents the “AR” in AR-15, a semi-automatic weapon type commonly used in mass shootings. The gun manufacturer first created the gun for military use in the 1950s, later selling the model to Colt, according to NPR.

Semi-automatic rifles fire a single bullet with every pull of the trigger and automatically reload for each shot. The magazines of AR-style rifles can generally hold 10 to 30 rounds but can be fitted with specialized magazines that store extra ammunition.

The Violence Project reports that when semi-automatic weapons are used, nine people die on average and 11 are injured compared to six people who die and five injured when other types of guns were used.

Nearly half of mass shooters legally obtained the guns that law enforcement knew about through a licensed dealer, an unregulated private sale or other legal means, according to The Violence Project.

In the 14 mass shootings in 2022, it’s unclear how seven of the suspects obtained the guns, according to the Gun Violence Archive.

Densley, of The Violence Project, said of the guns with known origins, data shows:

The Violence Project does not know the origin of 22% of the 388 total guns used in this time period.

UVALDE SHOOTING:One month later, moments of silence, yet so much left to say

1 in 3 mass shooters were prohibited from owning a gun

Illegally obtained mass-shooting weapons accounted for 27% of The Violence Project’s data, which showed 105 weapons were from either straw purchases, lying and buying, street sales, system failures or other means, Densley said.

Meanwhile, Everytown for Gun Safety found 1 in 3 mass shootings from 2009 to 2022 involved a shooter that was legally prohibited from having a gun.

The organization, which considers four gun-related fatalities excluding the shooter to be a mass shooting, pointed to a lack of a comprehensive federally required background check for gun sales, making way for easier gun purchases from unlicensed sellers in 29 states.