Monkeypox spreads in L.A. County, but vaccine shortage persists. What to know 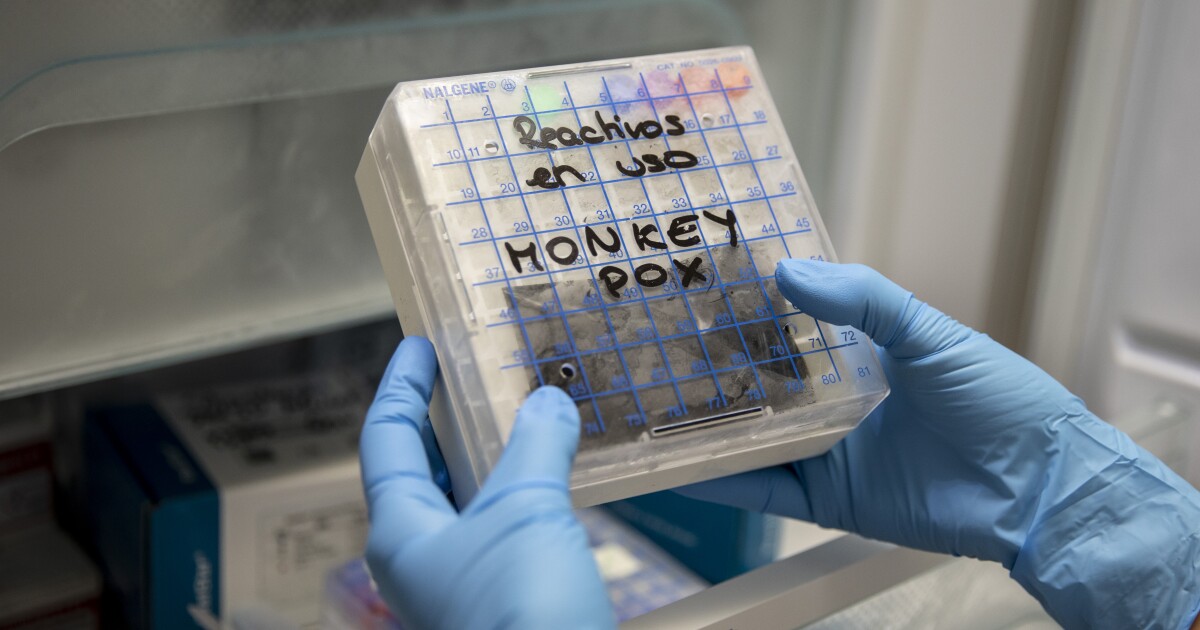 As criticism grows from LGBTQ activists and others, the Los Angeles County Department of Public Health said it will expand eligibility for the monkeypox vaccine to certain patients with recent sexually transmitted diseases and to high-risk people at Men’s Central Jail.

Still, eligibility will remain limited to the highest-risk people, and officials are reporting a severe shortage of the Jynneos vaccine that likely won’t be resolved for months.

The U.S. Department of Health and Human Services “has really been committed to letting us know that more — much more — is coming our way,” said Andrea Kim, director of vaccine-preventable disease control for L.A. County. “By the end of the year, it’s projected that we will have millions of doses available of Jynneos.”

But some in the LGBTQ community are worried that such a timeline will be too late to avoid spread, potentially resulting in monkeypox becoming a permanent threat in the U.S. While still far from widespread and nowhere near as contagious as the coronavirus, monkeypox has seen a dramatic rise in cases, with a roughly 60% week-over-week increase across California and in Los Angeles County. In San Francisco, cases have doubled.

“Monkeypox is a growing public health issue in our community. While the virus can infect anyone, it is particularly impacting gay and bisexual men,” Sen. Scott Wiener and Assemblymember Matt Haney said in a joint statement. “We have very little time to contain this outbreak and prevent it from getting out of control and potentially becoming endemic.

“The federal government has once again had a public health failure, this time by failing to order enough vaccine doses to prepare for this foreseeable outbreak,” Wiener and Haney wrote. “The federal government needs to dramatically increase the supply of the vaccine and distribute it to impacted local communities as quickly as possible. We have no time to spare.”

Early administration of the Jynneos vaccine can help prevent monkeypox illness even after a person is exposed to the virus.

The vaccine is administered in two doses, 28 days apart, and a person is considered fully vaccinated two weeks after the second dose. That means it takes about six weeks after the first dose to get the greatest protection. Even then, completion of a two-dose vaccination series confers only 85% protection, said Dr. Dawn Terashita, associate director of L.A. County’s acute communicable disease control program.

The vaccine “shouldn’t be thought of as, like, some sort of 100% protective measure,” Terashita said. “Everyone should always take precautions to prevent disease transmission.”

LGBTQ organizations and county officials are ramping up efforts to spread the word on how to avoid infection.

“For best prevention, avoid close physical contact — both sexual and nonsexual — with people who have symptoms of an illness, sores or rashes,” the Los Angeles LGBT Center says in a fact sheet. “Talk to your sexual partner/s about any recent illness, potential exposures and any new sores or rashes.”

A virtual town hall to discuss monkeypox will be held Tuesday at 6 p.m.

Officials are urging people at high risk of exposure to check themselves for signs of infection — such as rashes, bumps, blisters and pus-filled sores — and, if found, to isolate and seek medical attention. Other symptoms include fever and headache, muscle aches and swollen lymph nodes.

Officials are also urging people to check whether sexual partners have signs of a monkeypox rash or bump, which are sometimes appearing first in the area of the genitals or in or around the anus.

“In many instances with the current outbreak, people are developing a rash, with or without other symptoms, and this rash is often focused in the genital region,” Terashita said.

If you see skin rashes or a bump, “try to isolate yourself as much as possible to prevent spreading the disease to others. Make sure you monitor yourself for signs of early illness — perhaps fever, fatigue or any sort of rashes. And as soon as you have any symptoms, then definitely isolate yourself,” Terashita said.

“If a person develops a rash, we want them to isolate,” confirmed Dr. Leo Moore, a medical director for clinic services for the L.A. County Department of Public Health. “We’re also encouraging them to either come into a sexual health clinic or go to their primary care provider and to be tested for monkeypox.”

Monkeypox rashes can be hard to distinguish from other more common infections, such as syphilis.

Monkeypox infections can be painful, resulting in symptoms so severe that patients need to be prescribed painkillers. The illness can last two to four weeks and result in a rash that spreads across the body.

Monkeypox is primarily transmitted by skin-to-skin contact with someone who has a rash and pus-filled sores. It can also be transmitted through contact with virus-filled materials, such as bedding and towels, and potentially through close contact with respiratory droplets coming out of an infected person’s mouth, nose and eyes.

No one in L.A. County has been hospitalized or died of monkeypox, and the strain involved — the West African — is rarely fatal. Of the 7,500 cases worldwide, there have been three deaths; none occurred in the United States, according to Dr. Rita Singhal, chief medical officer for the county Department of Public Health.

Still, some people can suffer significant complications, such as those with weakened immune systems and those with a history of eczema. Rare complications can include lesions in the eye that endanger vision.

The expanded eligibility for the monkeypox vaccine in L.A. County will cover gay and bisexual men and transgender women who have been diagnosed with rectal gonorrhea or early syphilis — both of which can increase the risk of monkeypox transmission — within the past three months and are patients of a sexual health clinic. Also newly eligible will be a limited number of high-risk people identified by clinical staff at Men’s Central Jail.

Everyone who is eligible for the vaccine will need to be invited to get it; the Department of Public Health or clinics will directly contact eligible patients, Kim said. Starting next week, she said, the county will begin distributing vaccine doses to community sexual health clinics to administer.

“With the Jynneos vaccine supply extremely limited in the United States, residents who have not been contacted by [the L.A. County Department of] Public Health or clinic partners are not able to be vaccinated at this time,” the agency said in a statement. “Public Health will expand eligibility as additional doses are available; the federal government anticipates distributing additional doses later this month.”

Dr. Ward Carpenter, director of health services for the Los Angeles LGBT Center, said the county’s plan to target those already receiving treatment for STDs is the correct approach, given how the monkeypox virus is acting like an STD.

“The obvious goal here is to get vaccines into those who are at risk,” Carpenter said. “Then we really start to draw a better level of community protection, and that’s what’s going to limit the outbreak.”

Carpenter echoed public health recommendations to seek medical care and testing for any possible symptoms or developments on the skin. Even people with rashes or marks that don’t look like typical monkeypox lesions have recently came back positive for the virus, Carpenter said.

“If you have something on your skin, get in and get seen,” Carpenter said.

Only about 1,000 doses of the Jynneos vaccine have been administered in L.A. County. An additional 6,000 doses recently arrived.

There have been about 700 monkeypox cases reported in the U.S. and 141 in California. Los Angeles County reported 54 cases as of Friday morning, up from 47 a day earlier; San Francisco reported 40 cases on Tuesday, up from 16 a week earlier.

One thought on “Monkeypox spreads in L.A. County, but vaccine shortage persists. What to know”