Mitt Romney Is Inventing Policies for a Fantasy G.O.P. 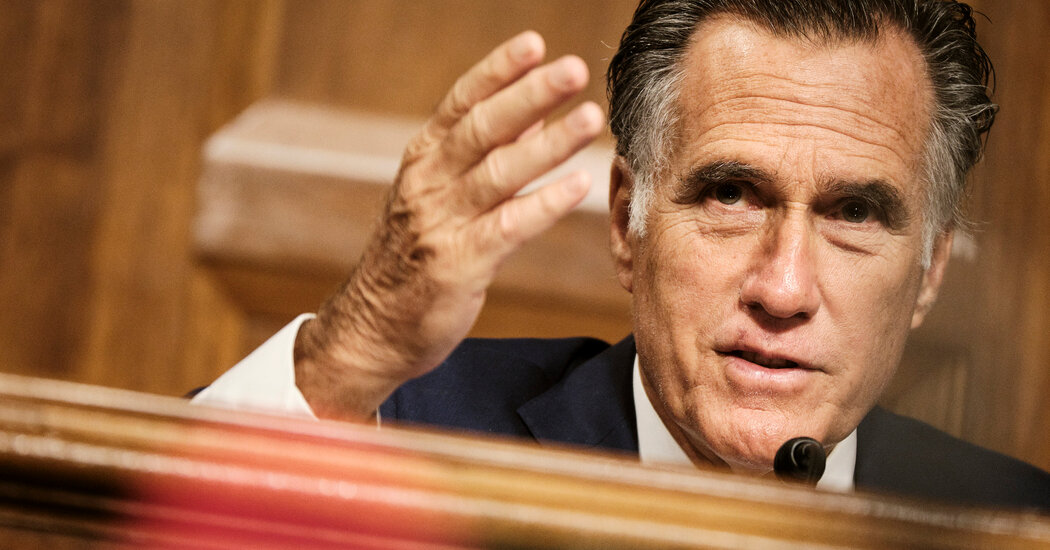 Last year, as an alternative to the temporary expansion of the child tax credit under President Biden’s American Rescue Plan, Senator Mitt Romney of Utah introduced a plan to give every family a monthly benefit of up to $350 per child for children 5 and under and $250 per child for children 6 to 17. It was simple, generous (it included a payment before birth, too) and — on paper, at least — effective. According to the Niskanen Center, which helped devise the proposal, the Romney plan would cut overall child poverty by roughly a third and the deepest child poverty by half.

Republicans hated it. His Senate colleagues Marco Rubio and Mike Lee denounced Romney’s plan as “welfare assistance,” and called for “pro-work” policies to assist families. “An essential part of being pro-family is being pro-work,” the senators said. “Congress should expand the child tax credit without undercutting the responsibility of parents to work to provide for their families.”

Romney, who voted against Biden’s rescue package, went back to the drawing board and recently unveiled a less generous version of his plan aimed at winning Republican support in the Senate. In this iteration, which would fill the gap left by the expiration of the Biden expansion in December, a family with children would have to earn at least $10,000 per year to qualify for the full credit. Below that, the benefit would scale proportionally so that a family earning $5,000 per year would receive 50 percent of the credit. The most impoverished families would receive the smallest benefits.

This version of the child benefit, to use the lingo of Romney’s earlier conservative critics, would “reward work.”

And yet, there’s little indication that any more than a token group of Republican lawmakers is interested in Romney’s latest proposal. There’s no appetite for it. For the vast majority of Republicans in Congress, passing a new child benefit is not the kind of work they came to Washington to do. (It should be said, though, that in the absence of the filibuster that token group of Republicans plus most Democrats would be enough to pass the Romney bill or something like it into law.)

The hostile and then indifferent response to Romney’s child allowance from his Republican colleagues — as well as the nearly total absence of meaningfully pro-family legislation from conservative lawmakers — tells us something very important about the future of the pro-life cause in the Republican Party. But maybe not quite what you think.

In the weeks since the Supreme Court overturned Roe v. Wade, some conservatives and abortion opponents have, as Elaine Godfrey reported in The Atlantic, expressed the hope that their movement and political party would turn its attention to the material well-being of mothers, families and children. So far, that hope seems to be misplaced.

Free, now, to pursue whatever policies they’d like on abortion, most Republican lawmakers and anti-abortion activists appear to be focused on passing harsh new restrictions on reproductive autonomy and creating broad protections for “fetal life.”

Trigger laws and prior statutes have already made abortion illegal in roughly a dozen states. Legislators in Missouri and Texas want to pass laws that would extend their bans across state lines, to punish residents who go to other states to obtain abortions. South Carolina Republicans, likewise, have drafted legislation that would ban all abortions except to prevent the death of the mother and would prosecute anyone “conspiring to cause, or aiding or abetting, illegal abortion.” And an Ohio bill would recognize the “personhood” and constitutional rights of “all unborn human individuals from the moment of conception.”

What you won’t find passing anytime soon in any Republican-led state legislature are bills to reduce the cost of childbearing and child-rearing. At most, a few states that have or will ban abortion have extended postpartum care under Medicaid. But there are no major plans to improve coverage or provide new benefits. As a practical matter, the pro-welfare, anti-abortion politician does not exist, at least not in the Republican Party.

This distance — between the rhetoric of “life” and the reality of conservative Republican governance — only looks like hypocrisy. In truth, it is perfectly consistent.

That’s because the Republican ideal of a “pro-family” agenda is girded on traditional hierarchies. Reproductive autonomy, up to and including the right to get an abortion, weakens traditional gender hierarchies. And the social safety net — especially one that extends directly to mothers and children — undermines the preferred conservative social order of isolated, atomized households kept in line through market discipline.

If the goal of abortion opponents and politicians is to encourage life and promote families then, yes, their interests and priorities are at odds with their actions. But if the goal is a more rigid and hierarchical world of untrammeled patriarchal authority, then, well, things are pretty much going according to plan.