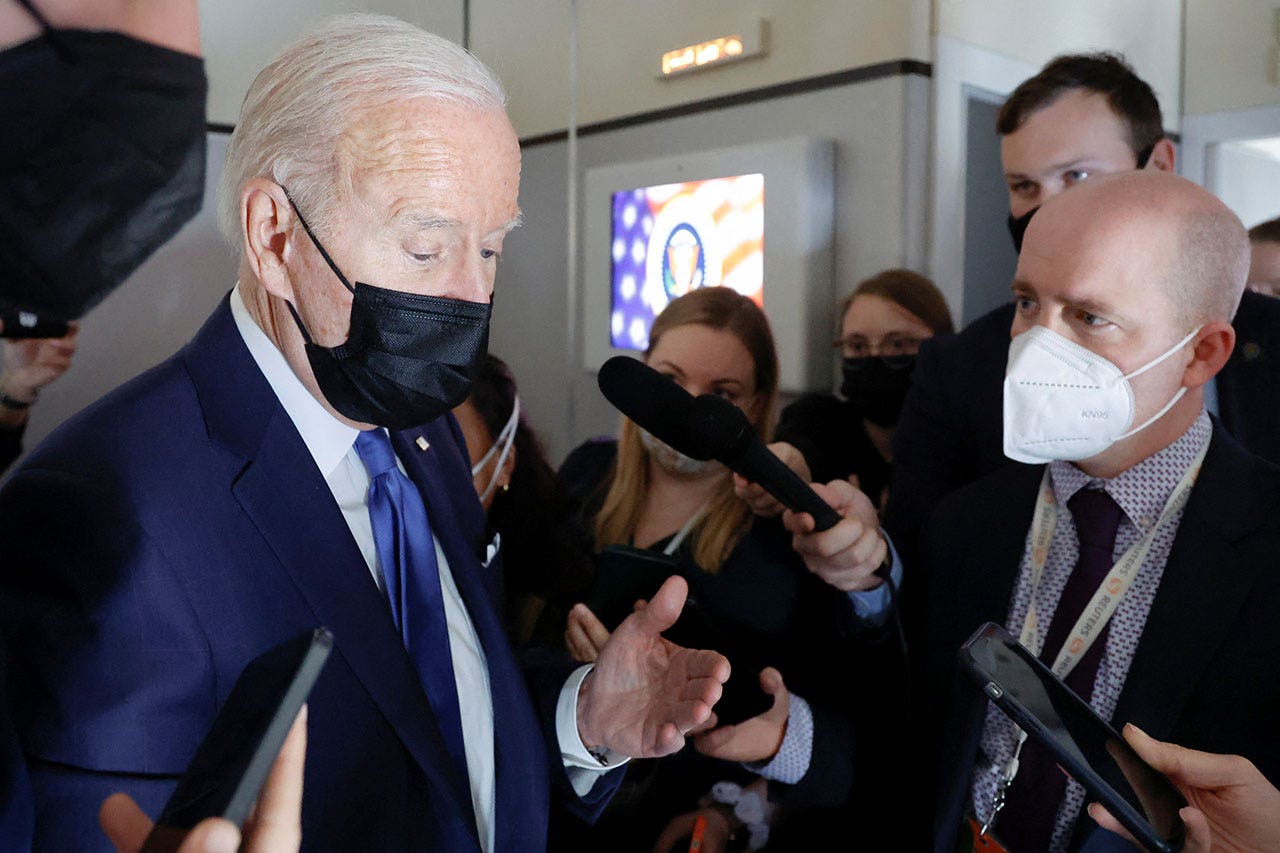 The media industry is having a credibility crisis, with confidence in newspapers and TV news cratering, and solution-minded experts don’t see a quick fix after years of disregarding fairness and objectivity.

A recently published Gallup poll indicates that “Americans are less confident in major U.S. institutions than they were a year ago,” including television news and newspapers, as well as the military, the presidency, police, religious organizations, banks, the Supreme Court and Congress. While none of the institutions gained trust compared to 2021, the media industry’s continued downfall is particularly stark.

Only 16 percent of Americans said they have a “great deal or quite a lot” of confidence in newspapers in 2022, a 5% drop compared to the 2021 findings, according to Gallup. It was the lowest number to give those answers since Gallup started asking about newspapers in 1973.

Americans have lost confidence in the media during the Biden administration, according to a Gallup poll.
(REUTERS/Jonathan Ernst)

Television news has Americans even more concerned in 2022, as a dismal 11% told Gallup they have a “great deal or quite a lot” of confidence in the industry. Also a record-low total, it was down 5% from the 16% who were confident in TV news last year.

Fox News contributor and media analyst Joe Concha is one of many onlookers who feel there is too much gray area in between actual news and partisan opinion. He has theories on how the press can regain trust, but he doesn’t think it will be an easy task – especially if significant changes aren’t made immediately.

“They can improve the situation by not injecting so much opinion into what should be straight reporting. And also by not automatically and blatantly taking a side on big issues such as the recent abortion ruling, or serving at the pleasure of one major political party like we saw by calling Florida’s Parental Rights in Education bill the ‘Don’t Say Gay’ bill. Instead, you might see some trust resorted, but it’s a hard bell to unring,” Concha told Fox News Digital.

Only 16 percent of Americans said they have a “great deal or quite a lot” of confidence in newspapers in 2022, a 5% drop compared to the 2021 findings, according to Gallup.
(iStock)

Journalist Glenn Greenwald shared the Gallup findings, noting “public trust in the media is close to non-existent” and believes the percentage of Americans who actually trust the press would be “zero” if it weren’t for Democrats. He put a spotlight on a portion of the poll that breaks down trust in institutions by political party, noting that Democrats have significantly more faith in TV news and newspapers than Republicans or independents.

When it comes to TV news, only 8% of Republicans expressed confidence while 20% of Democrats did.

“Everyone knows what side they’re on,” Greenwald wrote.

The New York Times is among the most influential institutions in the credibility-challenged newspaper industry. Ben Smith was the paper’s media columnist until he left in January and co-founded Semafor, a global news company that is expected to launch later this year.

“We’re hoping that a commitment to transparency and openness to a range of views can help close that gap over time,” Smith told Fox News Digital when asked how news organizations can improve poor institutional credibility.

MAYRA FLORES FIRES BACK AFTER NEW YORK TIMES CALLS HER ‘FAR-RIGHT LATINA’: PAPER KNOWS ‘NOTHING ABOUT ME’

Only 11% of Americans told Gallup they have a “great deal or quite a lot” of confidence in the TV news industry.

Fourth Watch editor Steve Krakauer, who has worked at a variety of media companies including CNN and TheBlaze, now authors a newsletter offering insider analysis of the industry. He thinks most news organizations simply need to admit they have a problem in order to start regaining trust.

“Having enough introspection and humility to step back and say, ‘I’m a journalist, and my audience doesn’t trust me,’ would actually go a long way toward recovery. So often the response from the press is to look for reasons the audience distrusts them as some version of the audience’s fault – as if it couldn’t possibly be earned distrust,” Krakauer told Fox News Digital. “But the truth is, with more sources than ever, the establishment press needs to work harder than ever to maintain and grow their audience, and give the readers and viewers a reason to turn the trust factor around.”

The dwindling credibility of news organizations is largely self-inflicted, according to many educators who long for the days of respectable journalists kicking off national conversations without influencing the nation’s opinion.

Cornell Law School professor and Legal Insurrection founder William A. Jacobson wrote about the Gallup study in a piece that indicated the “collapse of trust in institutions is fairly obvious by now” to anyone who has paid attention.

“We’ve been harping on how institutions have been gutted from the inside out by repressive progressive politics, what now is called wokeness, but the problem pre-dates that now-fashionable term. There is a generational effort to tear the country apart… some of the specifics are not surprising – the news media is in the toilet,” Jacobson wrote.

NEW CNN BOSS CHRIS LICHT ‘DETERMINED TO TAMP DOWN SPECTACLE’ AS HE EVALUATES WHO SHOULD STICK AROUND: INSIDER

“A reputation once lost is very difficult to regain. The overwhelmingly liberal mainstream news media lost its reputation long ago, as the Gallup survey confirms. There now are new sources of information available to those who turned off and tuned out those news outlets,” Jacobson told Fox News Digital when asked to elaborate on his column. “It’s too late to go back. Looking forward, separating the news and opinion functions could help, something CNN reportedly is considering after a decade of blurring the line.”

Indeed, recently appointed CNN boss Chris Licht is eager to shed the liberal reputation the network developed under previous management, as it became known most for its sharply antagonistic approach to covering the Trump administration, snarky chyrons and liberal editorializing.

DePauw University professor and media critic Jeffrey McCall believes “a functioning democracy hinges on having accurate information flow” and “decline in responsible journalism, no doubt, has harmed our nation on many levels in recent years” as trust has eroded.

“Too many news organizations have abandoned traditional professional standards related to objectivity, fairness and providing multiple perspectives of complex issues. The news industry has also filled itself with people who tend to think alike and no longer connect to wide sections of the American public. News consumers are plenty savvy enough to have noticed these trends and that explains the cratering of credibility ratings for the news industry,” McCall told Fox News Digital.

McCall said it would take “some serious introspection by news executives and the reporters in the newsrooms” to turn around the disturbing trend of Americans not trusting the press.

“Journalists in recent years have too often considered themselves smarter than the citizens they serve and that is a dangerous mindset for any profession that must work with and appeal to the public. A key step to improving credibility would be for newsrooms to recommit to the professional ethics codes that have guided journalism for decades. Editors and senior producers will also have to hire journalists who don’t all think alike,” McCall said.

University of North Carolina journalism professor Lois Boynton, a fellow in the university’s Parr Center for Ethics, doesn’t see a quick fix, either.

“When trust is broken, it takes a lot of effort to gain it back. Both parties – readers, viewers and news outlets – have to be willing to work together. The ‘my way or the highway’ approach by news outlets or their readers [and] viewers isn’t productive. Despite reticence toward give-and-take, compromise and collaboration are essential components for any potential solutions,” Boynton told Fox News Digital.

Boynton explained that many news organizations face a dilemma of weighing what is profitable versus what is the “right” thing to do. “No one has come up with a magic formula that provides both,” she said.

“From an ethics perspective, there’s something to be said for transparency. By that, I mean being open about how information is gathered and by whom, how it’s being presented – news vs. commentary, for example – why they have selected certain sources, etc. Objectivity is an interesting animal as well,” Boynton continued. “We know that people – that includes reporters – are not wired to be objective, but they can do the work in ways to show their processes to be as fair as possible.”

Boynton said that iconic reporter Walter Lippmann in 1919 essentially said reporters should approach newsgathering knowing that their preconceived notions and biases will influence what stories get covered, what sources get selected, what quotes they cull, what goes in the lead, how the information is framed. Lippmann wanted journalists to be transparent about their process, but many modern news organizations have lost the trust of Americans by not following Lippmann’s advice.