Matthew McConaughey as US president could get country out of current ‘mess,’ says Andrew Yang 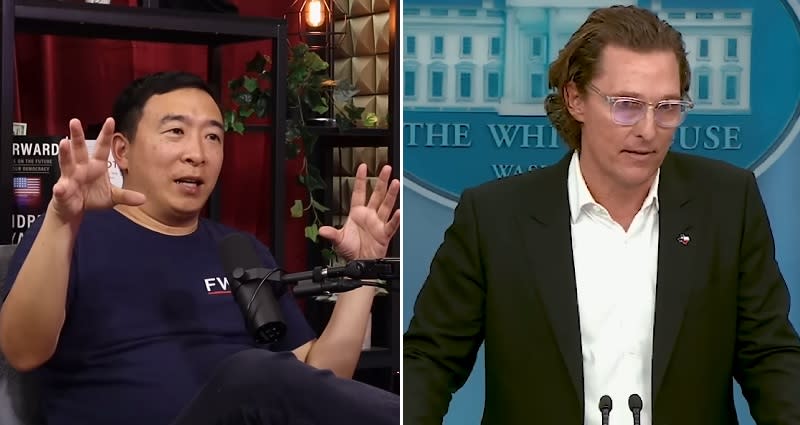 Former Democratic presidential candidate Andrew Yang believes that actor Matthew McConaughey could potentially get the United States out of its current “mess” if he runs for president in 2024.

Speaking with comedian guest Shane Gillis while recording an episode of Yang’s podcast “Forward with Andrew Yang” on Monday, the 47-year-old businessman-turned-political candidate opened up about the state of the country’s two political parties.

During the segment of the podcast episode that asked, “Do voters want an authentic president?,” Yang, who joined CNN as a political commentator in 2020, spoke about the Democratic Party, describing it as a group that expects people to follow rules and “act a certain way.” He added that the party he ran with during the2020 presidential election was “buttoned-up” and had a “certain way of presenting.”

“Then you have the Republican party under Trump, that’s become this anti-institutional, f*ck everything, burn it down, kind of energy,” Yang continued. “There’s a Republican establishment within that – that fought Trump and lost. … Now everyone’s going along with it.”

Yang then declared that there needs to be a “positive ex-institutional energy that comes up and ends up being this third force in American politics.”

The person he cited as his ideal candidate was McConaughey, 52, whom he described as someone who comes from “outside the institutions, but he’s not an assh*le in the same way Trump is.”

“So I look at someone like that and think, ‘God, that’s the kind of figure that we need to get us out of this mess,’” Yang said.

Other people Yang thinks could fall under the “ex-institutional” candidate category include Mark Cuban, The Rock and Oprah Winfrey.

In an interview with The New York Times podcast “Sway” in October 2021, McConaughey revealed that he was learning more about politics and was still unsure of whether he wanted to run for Texas governor, saying, “Where can I be most useful? Is politics an embassy for me to be of the most use to myself, to my family, to the most amount of people in my life moving forward?”

After much deliberation and around two weeks before the candidate filing deadline for the Texas primary, the Oscar-winning actor announced in November 2021 that he would not be running for governor.

More from NextShark: San Francisco DA Chesa Boudin may be ousted after tonight’s recall election by his own party

More from NextShark: MP candidate refuses to apologize after mixing up Asian Australian opponent with another politician

In a video posted on Twitter and Instagram on Nov. 29, 2021, the “Interstellar” actor said running for governor is a “humbling and inspiring path to ponder,” but it is “also a path that I’m choosing not to take at this moment.”

McConaughey attended a White House press briefing in June to talk about the Uvalde elementary school shooting, where 18-year-old Salvador Ramos stormed Robb Elementary School in Uvalde, Texas, killing 21 people – including 19 children aged between 7 and 10 – and injuring 17 others.

In his bipartisan speech, the “Wolf of Wall Street” starargued for changes togun regulation in the country, calling for background checks, Red Flag Laws and raising the age requirement to purchase assault rifles to 21.

“We are in a window of opportunity right now that we have not been in before, a window where it seems like real change — real change can happen,” the Uvalde native said. “There is not a Democratic or Republican value in one single act of these shooters.”

“But people in power have failed to act,” McConaughey continued. “So we’re asking you and I’m asking you, will you please ask yourselves: Can both sides rise above? Can both sides see beyond the political problem at hand and admit that we have a life preservation problem on our hands? Because we got a chance right now to reach for and to grasp a higher ground above our political affiliations, a chance to make a choice that does more than protect your party, a chance to make a choice that protects our country now and for the next generation.”