Manhattanhenge: How to capture the New York City phenomenon for the final time in 2022 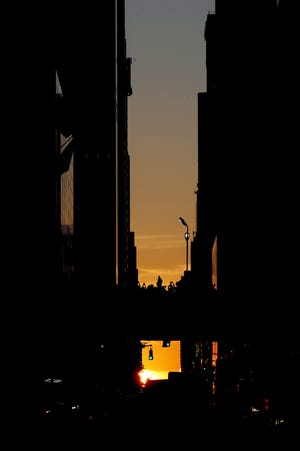 New York City residents and tourists will have the chance to see one of the concrete jungle’s greatest spectacles on Tuesday for the final time this year: Manhattanhenge.

The made-for-Instagram moment occurs when the sun perfectly lines up with Manhattan’s grid streets, as the sunset appears just on the street horizon. The term was first coined by astrophysicist and New York City native Neil deGrasse Tyson in 1997 as a nod to the Stonehenge monument in England.

“It’s insanely popular,” Jackie Faherty, astrophysicist at the American Museum of Natural History, told USA TODAY in 2020. “People plan their vacations around coming to NYC to see it.”

What time is Manhattanhenge?

The first three days of Manhattanhenge happened on May 29-30 and July 11. July 12 is the last day to see it in 2022, according to the New York City Department of Parks & Recreation.

Tuesday’s spectacle will be a “half-sun Manhattanhenge.” It will happen at 8:21 p.m. local time, and you better be on time to see it.

“Manhattanhenge lasts for only a few minutes at sunset – get there early!” the department says.

What is the best place to see Manhattanhenge?

To get the best view of Manhattanhenge, the city’s parks and recreation department says people should go onto Manhattan’s major cross streets that run from west to east, with nothing blocking the view to the west.

These are the streets the city recommends people go to: