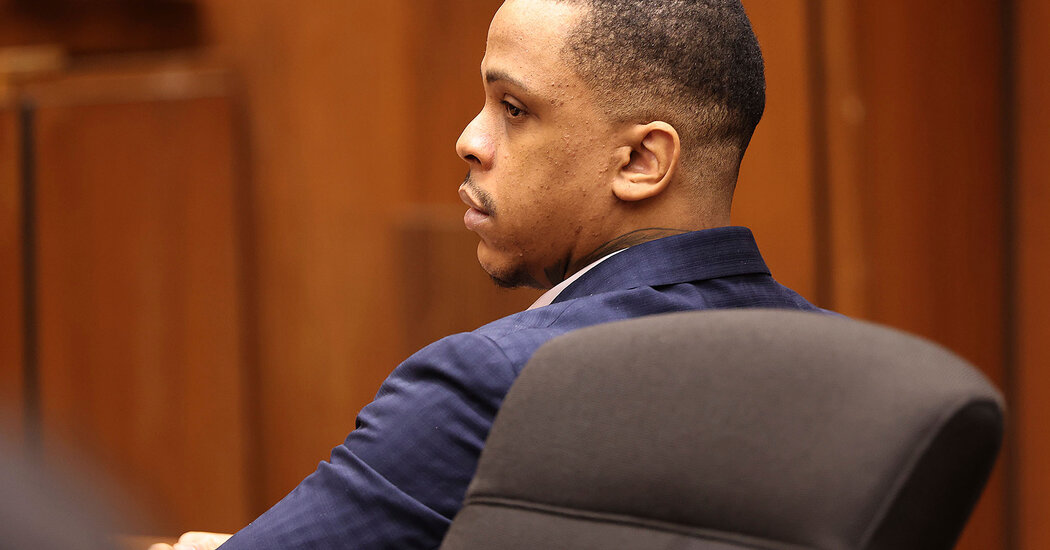 LOS ANGELES — More than three years after the fatal shooting of the rapper Nipsey Hussle, whose 2019 killing in front of the local clothing store he owned scarred the South Los Angeles neighborhood he had devoted his adult life to championing, a jury on Wednesday found Eric R. Holder Jr. guilty of first-degree murder in the case. The verdict closes a painful chapter in recent hip-hop history.

At trial, prosecutors described the gunman as an embittered acquaintance who had belonged to the same street gang as Hussle but felt disrespected by him during a brief parking-lot run-in.

That Mr. Holder pulled the trigger was not in dispute in court. His own public defender and multiple witnesses identified him as the assailant who fired toward Hussle with two handguns, hitting the rapper at least 10 times before kicking him in the head.

But Mr. Holder’s legal team had argued that the case was overcharged. Aaron Jansen, the public defender representing Mr. Holder, said that the killing was not premeditated and instead occurred in the “heat of passion,” about nine minutes after a conversation in which Hussle invoked neighborhood rumors that Mr. Holder had cooperated with law enforcement, or snitched, a serious offense in the gang world, and urged him to clear things up.

Mr. Holder should have been charged with voluntary manslaughter, his lawyer said.

After meeting for less than an hour on a second day of deliberations, the jury members indicated they agreed with Los Angeles county prosecutors that Mr. Holder had made the decision to kill Hussle as he returned to a car after the two spoke, loaded a gun, took a few bites of French fries and then marched back through the parking lot to confront the rapper.

Mr. Holder, 32, was also found guilty of two counts of attempted voluntary manslaughter, stemming from the two bystanders who were wounded in the shooting, lesser charges than the attempted murder counts that prosecutors had brought.

Mr. Holder’s lawyer argued that his client had no specific intention of harming either of the wounded men, both of whom were strangers to him, when he attacked Hussle outside of the Marathon Clothing shop in the Crenshaw neighborhood where the rapper and his assailant grew up.

In addition, Mr. Holder was found guilty of possessing a firearm as a felon and two counts of assault with a deadly weapon. He could face life in prison, and was scheduled to be sentenced on Sept. 15. Mr. Jansen said that in sentencing, he will ask the judge to consider Mr. Holder’s mental health history, including a years-old schizophrenia diagnosis.

In court, Mr. Holder stared forward, unflinching. He wore a dark navy suit and white sneakers. There was no sound in the courtroom as the verdict was announced — no reaction from the half-full gallery.

Hussle, whose real name was Ermias Joseph Asghedom, was mourned widely after his death at 33 as a principled artist and entrepreneur who transcended his early years as a member of the local Rollin’ 60s Crips, emerging as a hard-boiled, motivational lyricist and community ambassador. His public memorial in April 2019, at what was then known as the Staples Center in downtown Los Angeles, drew some 20,000 admirers, including Stevie Wonder and Snoop Dogg.

Though not a commercial hitmaker for most of his career, Hussle was known for his extensive industry connections and independent business sense, having sold music on his own terms for 15 years before releasing his major label debut, “Victory Lap,” in 2018. A Grammy nomination for best rap album and a management partnership with Jay-Z’s Roc Nation near the end of his life had the rapper poised for a move deeper into the mainstream.

Along the way, Hussle had also preached Black empowerment through business and education, investing his winnings as a musician in the neighborhood where he was raised. With a group of backers, Hussle bought the strip mall at the corner of Crenshaw Boulevard and Slauson Avenue that housed his Marathon store, while also helping to open a nearby co-working space dedicated to increasing diversity in science and technology.

Following the verdict, John McKinney, the Los Angeles County deputy district attorney prosecuting the case, said he hoped that it would bring “some resounding peace” to friends and fans of the rapper.

“This verdict and the story of his life will be talked about for sure at Crenshaw and Slauson,” Mr. McKinney said, “but the meaning of it will carry far beyond those streets.”

On the Sunday that Hussle was killed, he had stopped by the shopping plaza for an unannounced visit, as he often did, according to court testimony. While catching up with friends and employees in the parking lot, Hussle spent about half an hour signing autographs and posing for photos with fans.

At that time, Bryannita Nicholson, a woman Mr. Holder had been casually dating, was driving him around the area, Ms. Nicholson testified. A key witness for the prosecution who said that she had transported Mr. Holder to and from the scene of the shooting, Ms. Nicholson was granted immunity from prosecution for her appearance in court.

When Ms. Nicholson pulled into the plaza so that Mr. Holder could get something to eat, she spotted Hussle in the parking lot and remarked in passing that he looked handsome, she said on the stand. Mr. Holder, a fellow member of the Rollin’ 60s Crips, approached Hussle for a brief conversation while Ms. Nicholson waited in the car, she said.

The encounter between the two men was casual and low-key, according to testimony. But prosecutors said Hussle told Mr. Holder that there were rumors going around the neighborhood that he had snitched. Hussle encouraged Mr. Holder to “get the paperwork” showing he had not, said Mr. McKinney.

“It just seemed like a regular conversation,” Mr. McKinney told the jury. “But obviously it wasn’t.” He called the pair “two men whose arcs in life were bending in different directions.”

As the men finished speaking, Ms. Nicholson said she overheard talk of snitching as she approached Hussle for a selfie, which she posted to Facebook. It would be the last photograph of the rapper. Asked in court if she sensed that a fight was about to occur, Ms. Nicholson said, “No, I wasn’t afraid at all.”

As Ms. Nicholson pulled into another nearby parking lot so Mr. Holder could eat, she testified, he pulled out a handgun and began loading it. He walked back toward Hussle’s store; a short time later, Ms. Nicholson heard gunshots.

According to witnesses, Mr. Holder had confronted the rapper outside and said, “You’re through” as he opened fire.

“You got me,” Hussle said, according to the prosecutor. Two men who were standing with Hussle, Kerry Lathan and Shermi Villanueva, were wounded by the shots.

In his opening statement, Mr. McKinney, the prosecutor, portrayed Ms. Nicholson as a kind of unwitting accomplice. “I think you’ll find in her a naïveté, a simplicity,” he said. Mr. Holder mostly avoided her eyes or looked at her dispassionately as she testified.

In that testimony, Ms. Nicholson said that when Mr. Holder got back into her car, he told her to drive or he would slap her. That evening, she learned of Hussle’s death. But Ms. Nicholson said it wasn’t until more than a day after the shooting, when her mother recognized her white Chevy Cruze on the news, that she realized that Mr. Holder may have been involved.

Mr. McKinney emphasized that Ms. Nicholson quickly agreed to cooperate with the police, allowing the authorities access to data from her phone and submitting to hours of interviews. “I was thinking, ‘Oh my God, this is my reputation, too,’” she testified.

In addition to being the agreed-upon motive in the shooting, the concept of snitching — and its outsize importance in gang culture — loomed over the trial. While Mr. Holder was repeatedly identified as the gunman, lawyers on both sides cited some witnesses’ reluctance to testify in detail, or even show up to court, for fear of retribution.

“I don’t know nothing, don’t see nothing,” Mr. Lathan, who was wounded in the incident, said during his turn on the witness stand.

“You don’t want to testify about what happened?” the prosecutor asked.

Mr. Jansen, the defense lawyer, had argued that it was precisely that anti-snitching culture that transformed a conversation between Hussle and Mr. Holder into a provocation.

“Even people who are shot don’t want to come in and testify against Rollin’ 60s gang members,” Mr. Jansen said in an interview after the verdict. “I thought those facts supported what we were saying: Eric Holder didn’t want to be labeled as a snitch either, out of fear of retribution.”

Mr. Jansen added: “I just wanted people to remember that Eric Holder Jr. is a human being. He did a terrible thing and he will have to face justice for that.”

Last Tuesday, Mr. Holder was attacked while in custody, briefly delaying the final days of the trial. His lawyer said that his client had been punched in the face and “sliced with some kind of razor.”

Because of the high-profile nature of the case, and because it hinged on questions about consequences for snitching, Mr. Jansen said his client should have been in protective custody.

In court, prosecutors did rely in part on the testimony of Herman Douglas, known as Cowboy, a onetime Rollin’ 60s member who worked at Hussle’s Marathon store.

Mr. Douglas testified that while he was no longer involved in gang life, he still vigilantly watched every car and person that crossed his path for signs they might be dangerous. At no point in Hussle’s conversation with Mr. Holder, he said, did he sense that the rapper was at risk. “I would’ve snatched him up out of there,” Mr. Douglas said.

When the defense questioned Mr. Douglas about whether there could be consequences as dire as “getting beat up or even killed” for snitching, Mr. Douglas said that was unlikely. He noted that his participation in the trial could be considered snitching by some. But things had changed since he was coming up in the neighborhood.

Following the guilty verdict, Mr. Douglas sat outside the courtroom and cried into his hand, his shoulders shaking. Later, he told reporters he did not know if he would ever feel closure after his friend’s death. But he said that he hoped his participation in the trial would show others that sometimes it was worth speaking up.

“Just do what’s right,” he said. “No matter what people say.”