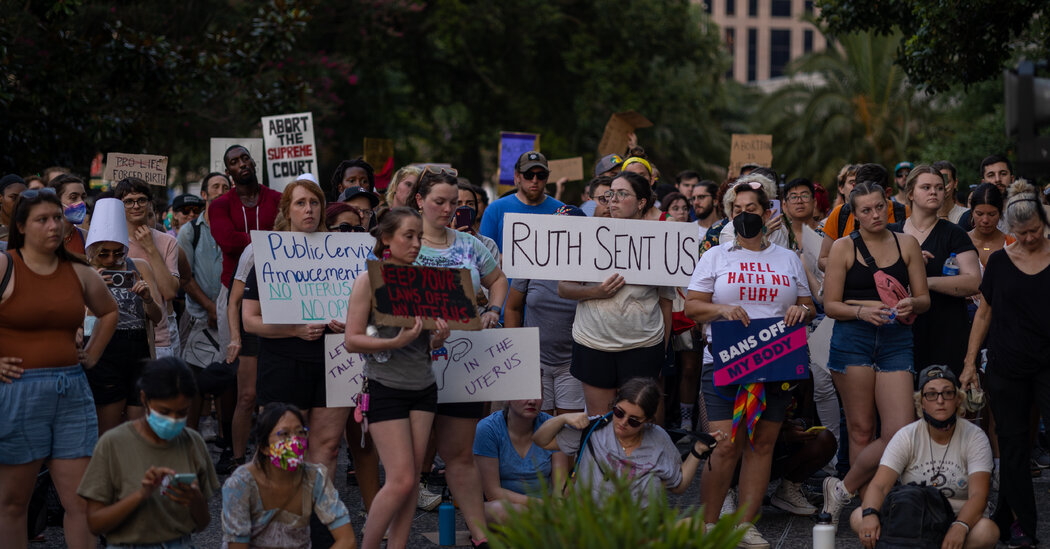 Abortions became legal again in Louisiana on Tuesday after a Baton Rouge judge granted a temporary restraining order blocking the state’s abortion bans from being enforced.

The judge’s decision was the latest in a series of legal maneuvers that have jolted the legal status of abortions in the state, leaving women and providers scrambling to adapt. One of the few remaining abortion clinics in the state said it would resume providing the procedure.

Louisiana is among a number of conservative states that passed abortion restrictions or bans in anticipation that the Supreme Court would overturn Roe v. Wade, the landmark decision that since 1973 had guaranteed a constitutional right to abortion. When the court did so last month, triggering those state bans, abortion rights groups and providers sued, arguing that state constitutions protected the right to abortion.

That decision immediately outlawed abortions starting at conception, with an exception for a threat to the life of a pregnant woman, but with no exceptions for rape or incest. Under one Louisiana law, abortion providers face possible jail time of 10 or 15 years, depending on when the pregnancy was terminated.

Read More on the End of Roe v. Wade

On Tuesday, the court said abortions could resume at least until Monday, when it will hold a hearing to consider the abortion providers’ argument to put the bans on hold more permanently.

“Two separate Louisiana judges have now rightly found that irreparable harm will occur if the trigger bans are enforced,” Joanna Wright, a lawyer for the plaintiffs, said.

Jeff Landry, attorney general of Louisiana, did not immediately respond to a request for comment. But on Friday he had celebrated the end of the first temporary restraining order and vowed to continue litigation in Baton Rouge.

“We certainly intend to continue to defend the laws of the state and to enforce the laws,” Mr. Landry said last week.

The clinic that joined the lawsuit, Hope Medical Group for Women, said it would again start providing abortions in Shreveport. It had stopped providing them on Friday, but remained open to see patients for ultrasounds and “options counseling,” said Kathaleen Pittman, the clinic’s administrator. The clinic had redirected patients to providers in other states, but surrounding states have also severely restricted or banned abortion.

“It is insane,” Ms. Pittman said on Tuesday. “It is stressful. But more so for our patients than staff.”

Jenny Ma, a lawyer for the Center for Reproductive Rights, called it “an incredible relief for people who need abortion care right now in Louisiana.”

“Every hour and every day that a clinic can still provide abortion care fundamentally changes the lives of people for the better,” she said.

Louisiana’s State Constitution is unusual in that it explicitly says it does not provide a right to an abortion, meaning the Legislature has the right to pass laws restricting it. But abortion providers in the state argue that the trigger laws violate due process provisions in the Constitution and are “void for vagueness” because they do not provide specifics about what is legal or not under the law.

The fast-changing status of Louisiana’s trigger laws is emblematic of the chaotic national landscape that has unfolded in the weeks since the Supreme Court overturned Roe v. Wade.

Litigators for abortion rights groups rolled out lawsuits challenging trigger bans in a dozen states just after the court’s ruling. Judges rejected those challenges in Ohio and Mississippi, but other cases, including in Oklahoma, continue.