Look of the Week: Kaia Gerber is spitting image of mother Cindy Crawford in Alaïa outfit 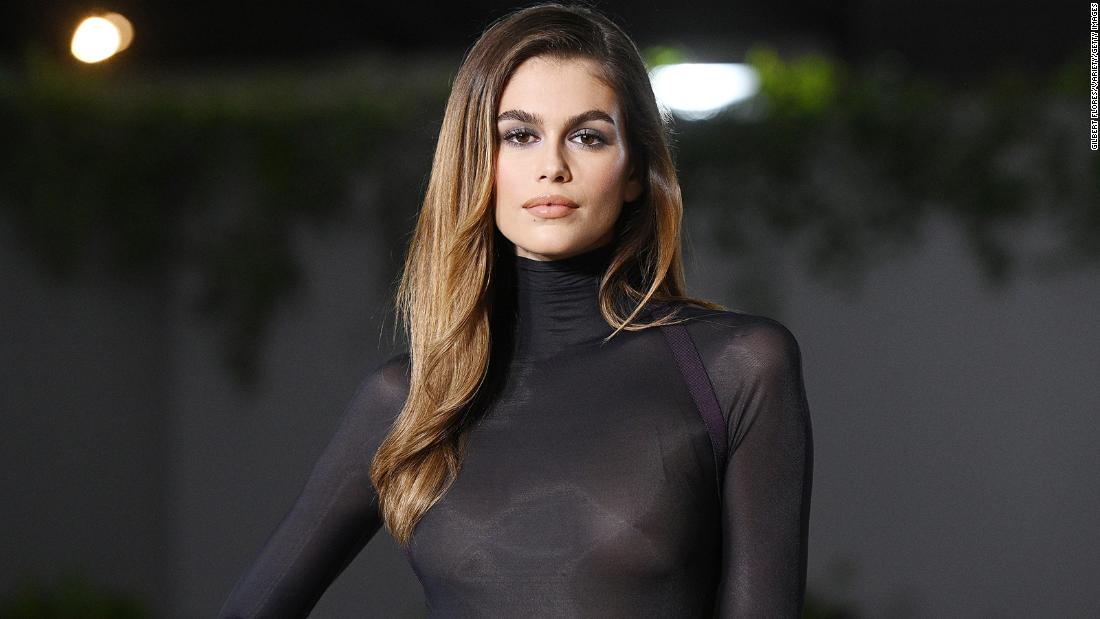 Featuring the good, the bad and the ugly, ‘Look of the Week’ is a regular series dedicated to unpacking the most talked about outfit of the last seven days.

Over the weekend, model and actor Kaia Gerber attended Hollywood’s 2nd Annual Academy Museum Gala in Los Angeles in a timeless, if not slightly subdued, Alaïa black mesh turtleneck top paired with a deep purple draped skirt. The look generated a lot of buzz online, with Twitter users pointing out the combination of Gerber’s silky, bouncy blowout and soft, earth-toned glam — complete with a pop of lilac eyeshadow — brought about an uncanny resemblance to mother Cindy Crawford.

One of “The Big Six” — an affectionate nickname for the group of 1990s supermodels that also featured Naomi Campbell, Christy Turlington, Kate Moss, Linda Evangelista and Claudia Schiffer — Crawford’s career as one of the most successful and recognized American models spanned 14 years before she officially quit the game in 2000. Her daughter with American businessman Rande Gerber, the now-21-year-old Kaia Gerber, was born in September 2001 — two years after her brother Presley.

It didn’t take Gerber long to follow in her mother’s footsteps, shooting her first campaign for Versace aged 10 and appearing in Italian Vogue at 14. (Presley Gerber also embarked on a brief stint in the industry in his teens). Since then, Gerber’s star has risen on the modeling scene, and her career has already featured numerous parallels with that of her famous mother — both have walked for Versace, Chanel, Michael Kors and Valentino, and have numerous Vogue covers under their belt. They’ve even starred on a couple together. “Never in my life did I think I would have our professional lives collide like that,” Crawford told Vogue in 2019 after the pair walked the Versace Spring-Summer 2018 runway together.

Comparisons between Gerber and Crawford are by no means new — on Gerber’s Instagram, any photo featuring her mother is typically flooded with comments calling the young model Crawford’s “clone” or “twin.” Entire articles have been dedicated to chronologizing all the times the pair looked identical, but these moments are at their most compelling when Gerber is, intentionally or not, echoing her mom’s style. At the 75th Cannes Film Festival in May, Gerber wore an uber-minimalist Celine halter neck in firetruck red — the straps and color reminiscent of a Fall-Winter 1993 Giorgio Saint’Angelo look Crawford modeled in 1992. On Sunday evening, the model’s outfit was layered with meaning: from the quintessential ’90s sheer fabric — beloved by Moss, Gwen Stefani, Jennifer Lopez and Drew Barrymore, among others, during that decade — to her side part and sleek tresses (known to Gen Z TikToker’s as “Cindy Crawford hair”).

Even the choice of label was a nod to her mother — Gerber’s dress was from the fashion brand Alaïa’s Spring-Summer 2023 collection; the label’s late founder Azzedine Alaïa consistently booked Crawford for runway shows from the late ’80s well into the ’90s. “Alaïa was my uniform for many years.,” Crawford told ecommerce platform Net-A-Porter in 2018. “I would always throw in a black Alaïa dress when packing for trips because you would never know when you might need that dress.”

The fashion world’s current obsession with ’90s styling shows no sign of slowing, and the sheer trend in particular has even enjoyed a revival. Across the runways this season, designers were playing with perspective through translucent tailoring, from Coperni’s sage green, see-through twist tops at Paris Fashion Week to Chanel’s sheer subversion of the classic skirt suit — complete with an entirely transparent blouse hemmed by a knitted neckline and two well-placed knitted pockets. Vintage mesh is having a moment, too. Propelled by Gen Z style icons Bella Hadid, Dua Lipa and Kylie Jenner, printed sheer tops with loud clashing patterns are considered the height of style. Archival Jean-Paul Gaultier mesh tops beaming with contrasting collages, for example, now retail for upwards of $300 on resale apps like Depop.

Instead of hopping on the trend, Gerber kept it classic and minimal — after all, she need only raid her mom’s closet to bring out the best the decade had to offer.