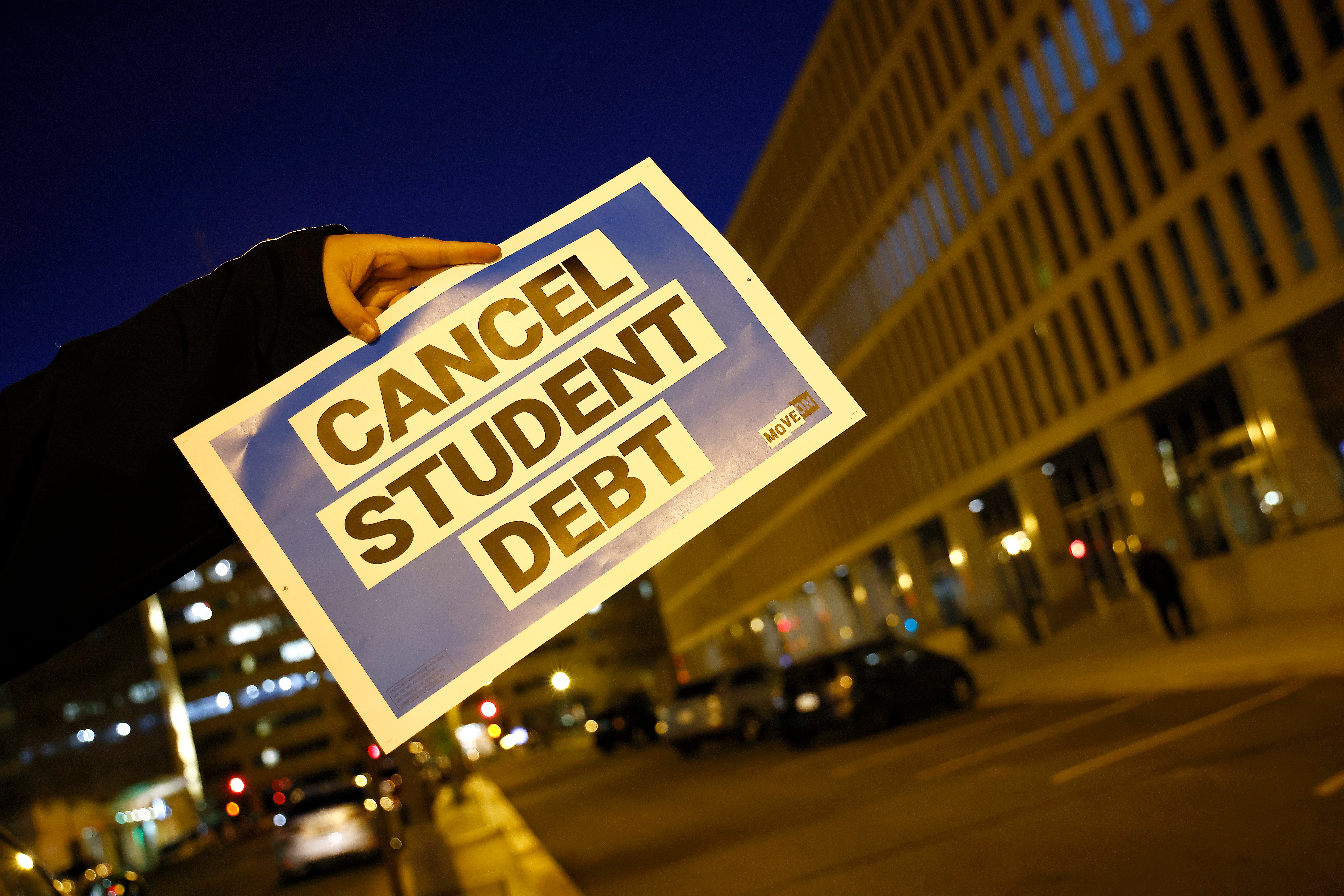 Leftists thrilled over President Biden signaling he would cancel a significant amount of student loan debt before the midterms, took to Twitter to attack Republicans for criticizing the controversial policy move.

Republicans raised concerns that this move would only exacerbate the country’s rising inflation. But liberal media figures were indignant at opposition to the far-left priority.

On the second anniversary of the student loan payment pause, We, The 45M, use signs and projections outside of the U.S. Department of Education.
(Photo by Paul Morigi/Getty Images for We The 45 Million)

“I’ve spent a lot of money over the past 10 years especially finally paying off my college debts. And yet I don’t begrudge people who may not have their college loans canceled because I’M NOT A SICK F**K WHO DEFINES MY SELF WORTH THROUGH THE CONTINUED SUFFERING OF OTHERS,” he tweeted.

“If we cancelled student debt but made it so everybody who paid off their debt before the cancellation got to punch are [sic] person who benefited from the relief in the mouth, would it make some of you people happy enough to support the ECONOMIC STIMULUS POLICY???”

David Sirota, columnist at the Guardian and former senior adviser for Bernie Sanders’ 2020 presidential campaign called it, “really wild that the ‘ending student debt would be unfair to people who already paid back theirs debts’ line was somehow not an [sic] line of argument when the government gave $13 trillion to a handful of bankers who destroyed the entire economy.”

“Very rich man is annoyed with students drowning in college debt,” she tweeted.

Nathan J Robinson, Current Affairs editor-in-chief and former political columnist for The Guardian scoffed, “I find it incredible that anyone can say with a straight face that people struggling with debt are “the rich.” Rich people have money! Student debtors don’t! If they were rich their parents would have paid for college.”

Daily Beast columnist Wajahat Ali even provided his own talking points for Democrats pushing back against the GOP.

“Immediate talking point for Dems when Republicans criticize Biden’s effort to cancel student loans: “Why are you against helping American students and workers but were fine giving the wealthiest 1% unnecessary tax cuts that cost us $1.9 trillion?” No need to relent or be timid,” he tweeted.

Progressive Democrats have been pushing the White House to cancel student loan debt as soon as possible, with the midterm elections not far ahead.

“Look, we know that the president has the authority to cancel student loan debt and the best way we know that is because President Obama did it, President Trump did it, and President Biden has now done it repeatedly. The power is clearly there,” she told CBS News on Sunday.

President Trump paused federal student loan payments in May of 2020 because of the coronavirus pandemic. But since President Biden took office in January 2021, he has repeatedly extended the moratorium on payments, which is now set to expire August 31.

But a group of Republican senators are pushing back, introducing a bill that would ban the president from canceling student loan debt and end the suspension of repayments.