Leaked security video from inside Robb Elementary School shows police officers stopping for hand sanitizer, running away from the gunman 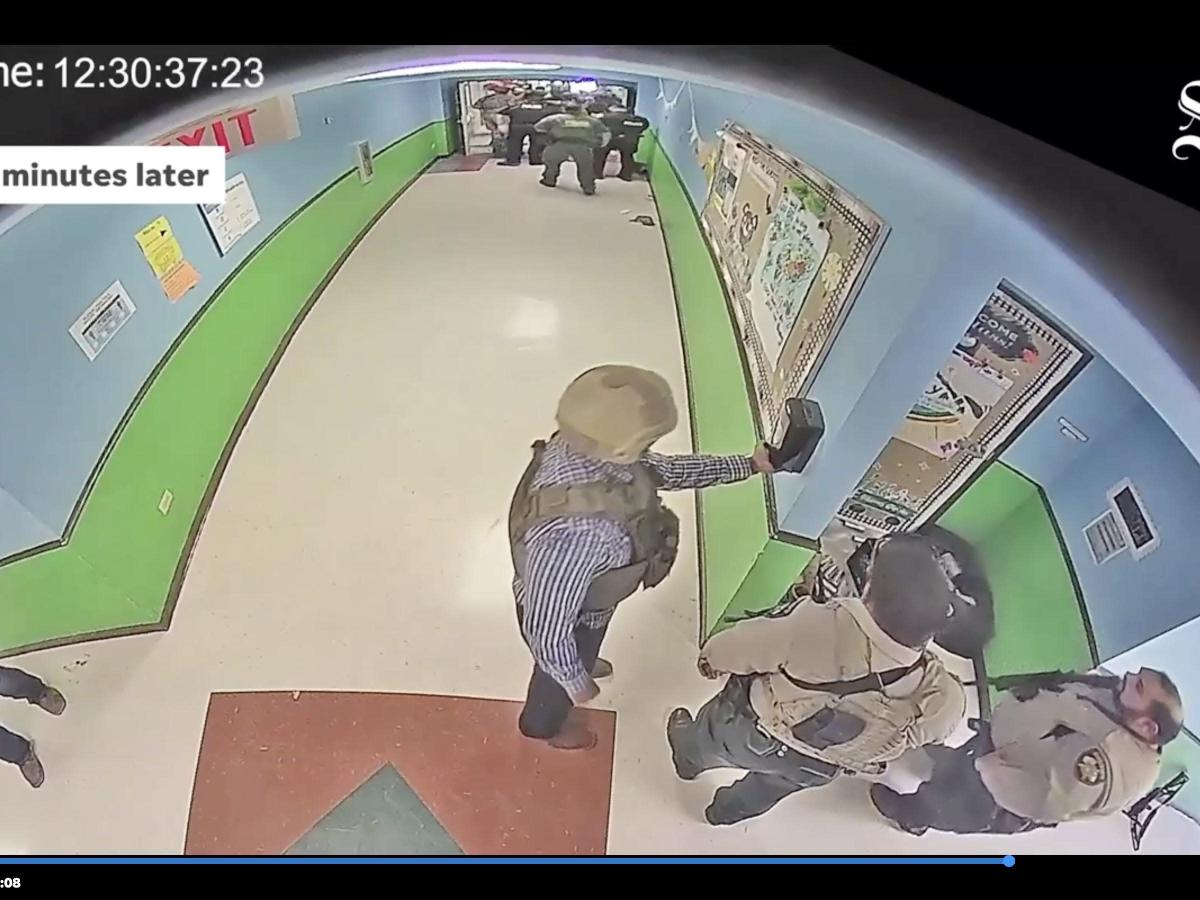 Police can be seen loitering in a hallway of Robb Elementary school for more than 77 minutes and running away from the gunman who killed 21 people in security footage obtained and released by the American-Statesman and KVUE.

One officer, wearing a helmet and ballistic vest, paused to use a hallway hand sanitizer dispenser shortly before officers breached the classroom and killed the shooter.

The four-minute video, which condenses video clips from inside and outside the school during the May 24 shooting, shows the shooter crash his truck on school property before entering the building. As he walked through the hallway, a young student can be seen rounding a corner, seeing the gunman, and running away as the man turned to enter a classroom toward the end of the hall. The gunman can then be heard firing inside the classroom for two and a half minutes.

The clip also reveals more than two dozen officers, some in tactical gear, waiting for more than an hour outside the classroom while the gunman was barricaded inside. Several officers are seen running away from the classroom door after hearing shots fired. While they waited, children and teachers from inside the building called 911 and begged for help.

Release of the video has been the subject of intense scrutiny and debate as Uvalde police have changed their story about the events of the shooting more than a dozen times.

“That video needs to be released, as well as the audio,” Texas Gov. Greg Abbott told Austin ABC affiliate KVUE in an interview on Monday afternoon, prior to the leak. “The Texans need to know. But, frankly, the people of Uvalde, they deserve to get to know exactly what happened. And I urge that it happen very quickly.”

Rep. Dustin Burrows, the chairman of the special Texas House committee investigating the shooting, tweeted earlier today that the footage was expected to be released next Sunday.

“The Committee will convene at 2 PM on Sunday in Uvalde,” Burrows’ statement said. “We will meet with members of the community first, and provide them an opportunity to see the hallway video and discuss our preliminary report. Very soon thereafter, we will release both to the public.”

A spokesperson for Burrows did not respond to Insider’s request for comment.