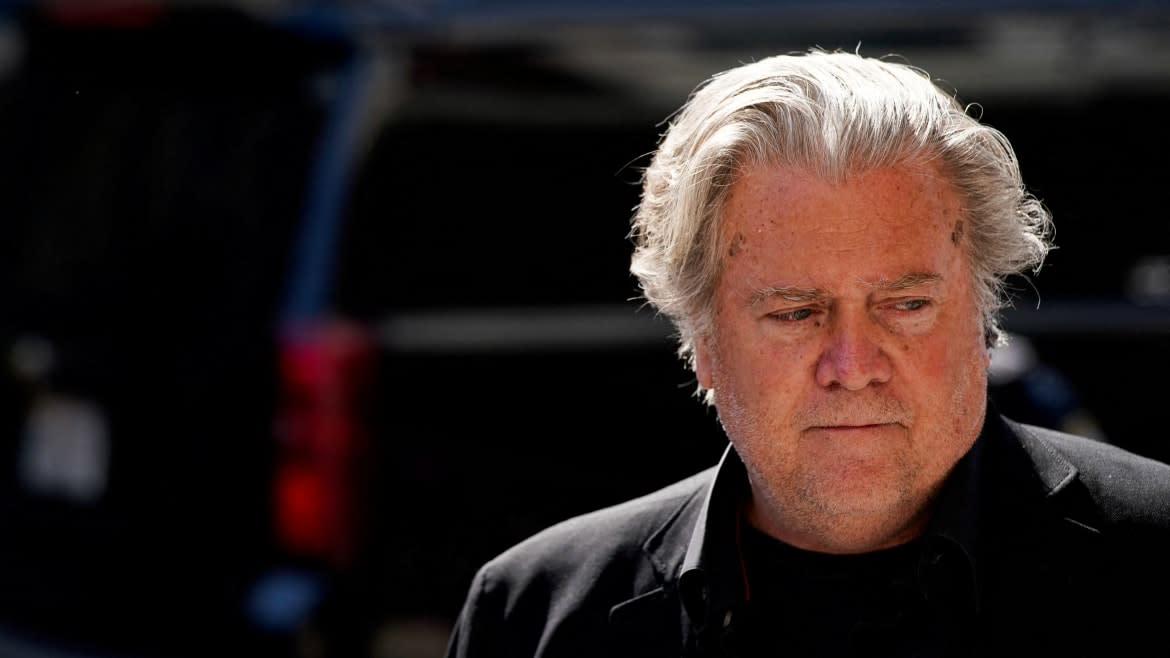 Donald Trump’s attorney has blown a huge hole in Steve Bannon’s claims to have been covered by executive privilege when he refused to testify before the Jan. 6 select committee—dramatically raising the stakes in his forthcoming trial for contempt of Congress.

Bannon has refused since last October to comply with a subpoena from the House panel investigating the Jan. 6 pro-Trump insurrection, prompting the criminal charges against him. But his lawyer, Bob Costello, announced Sunday night that Bannon would be appearing after all—after receiving a letter from the former president promising to waive executive privilege so his former White House adviser could, in theory, set the record straight.

In a bombshell revelation in the early hours of Monday, D.C. prosecutors announced that Trump’s attorney, Justin Clark, had been interviewed by the FBI on June 29 and had confirmed Trump had never invoked executive privilege to stop Bannon from testifying.

Further, in a motion filed with the U.S. District Court for the District of Columbia, they argued that discussion of Bannon’s last-minute come-to-Jesus moment should be excluded from this criminal trial when it starts next Monday.

In his dealings with the Jan. 6 Committee claiming executive privilege, Bannon lawyer Costello had referred to a letter from Clark to back up his claim of executive privilege. But according to the court motion, written by Assistant U.S. Attorney Amanda Vaughn, Clark not only confirmed that privilege was never invoked, but said Costello had “misrepresented” what Clark had told him and he had made clear to the Bannon lawyer that it provided no basis for noncompliance with the subpoena.

Vaughn noted that Bannon was provided with an FBI report on the interview the following day, June 30.

“The Defendant’s timing suggests that the only thing that has really changed since he refused to comply with the subpoena in October 2021 is that he is finally about to face the consequences of his decision to default,” Vaughn wrote.

She added: “Even the defendant’s claim that the reason he is now willing to testify is because the former President is ‘waiving’ executive privilege is subject to question given all the evidence and law that has been addressed in this case, of which he must be aware, demonstrating that executive privilege never provided a basis for total noncompliance in the first place,” he added.

Vaughn’s motion was formally submitted to the court in the name of Michael Graves, who was sworn in last November as U.S. Attorney for D.C. and charged with the oversight of hundreds of separate Jan. 6 investigations. Graves signed off on the explosive indictment against Bannon only a week later.

Bannon’s trial is set to begin next Monday, and prosecutors want the court to exclude in advance “any evidence or argument” relating to Bannon’s last-minute claim that he was now prepared to testify.

The wider implications of Clark’s responses in the FBI interview go far beyond the Bannon case—and again call into question Trump’s own truthfulness, especially given his flowery letter to Bannon on Saturday offering to formally waive executive privilege that had never been invoked in the first place.

The prosecutors’ memo went on to note that Costello, a longtime Trump lawyer whose name is though to have been redacted out of the Mueller Report, also worked for the former president and that his law firm is being paid by Trump’s super PAC.

“All of the above-described circumstances suggest the Defendant’s sudden wish to testify is not a genuine effort to meet his obligations but a last-ditch attempt to avoid accountability,” the memo concluded.