LAPD officers were told a man had a gun and shot him. He had a cellphone 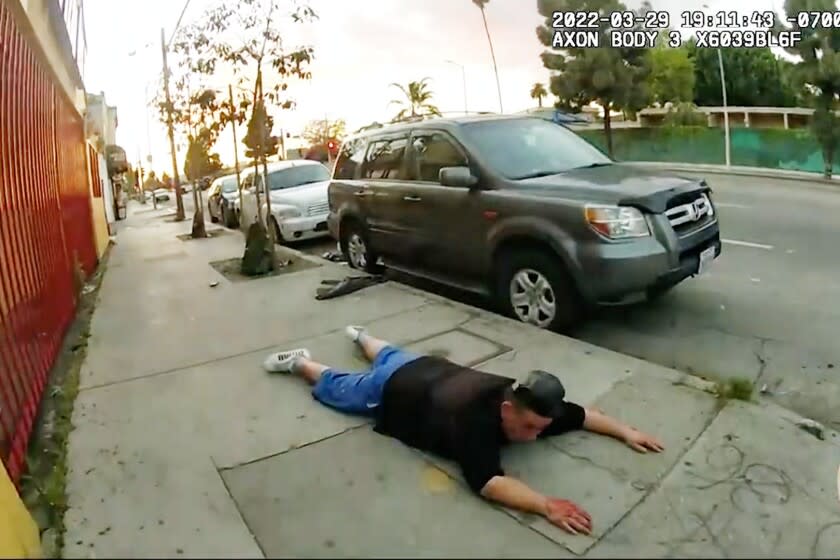 Video posted online this week by the Los Angeles Police Department shows two officers approach a man they believed was armed with a gun in South L.A. in March and immediately shoot him.

Jose Barrera, 45, did not have a gun or any other weapon, but was holding a black cellphone and waving it around. He survived.

The shooting is the latest in which LAPD officers opened fire after misjudging the threat posed by an individual, in part based on inaccurate claims from others — including 911 callers — that the people were brandishing firearms.

In the video from Barrera’s shooting that the department posted to YouTube on Thursday, a 911 caller tells a dispatcher in Spanish that a man with a gun is pointing it at people along Martin Luther King Jr. Boulevard.

The dispatcher asks the man if it is a small gun, and he then says he doesn’t know exactly what the man is holding. The call went out over the police radio as a man pointing an “unknown type handgun at passersby.”

Later, as responding officers Tatiana Bohorquez and Manuel Rios are driving toward the scene, another officer can be heard on the radio stating, “He does have a handgun, and he’s firing at a house right now.”

“Oh, s—,” Bohorquez, who is driving, can be heard saying.

Rios, in the passenger seat, then opens the passenger side door of the patrol vehicle as it is still moving and holds his handgun at the ready in his right hand.

Rios then immediately opens fire, seeming to fire four rounds down the street at Barrera.

Timestamps on the body-worn video the department posted showed that the officers then waited about 10 minutes to begin approaching Barrera with a group of other officers. Barrera was handcuffed and taken to a local hospital for treatment.

Despite the fact that Barrera did not have a gun or any other weapon on him, the LAPD presented a case for assault with a deadly weapon against him to the L.A. County district attorney’s office, which prosecutors rejected.

Barrera could not be reached for comment Friday. The district attorney’s office did not respond to a request for comment.

Capt. Kelly Muniz, an LAPD spokeswoman, said the department could not immediately answer questions about the incident or the officers’ actions prior to the completion of an internal investigation of the shooting.

LAPD Chief Michel Moore said areas of concern that arise from such shootings are addressed immediately with involved officers through preliminary briefings and trainings, but to reach public conclusions about officers’ actions before the completion of the related investigation “would be contrary to our commitment to basing conclusions after reviewing all of the information provided.”

Barrera’s shooting follows others in recent months in which LAPD officers opened fire on suspects whom callers had reported were armed with firearms, but were not.

Two days before Christmas, LAPD officers entered a Burlington store in North Hollywood where at least one 911 caller claimed that a man with a gun was threatening people and had opened fire.

“So he shot the gun?” the dispatcher said.

When officers found the suspect, 24-year-old Daniel Elena-Lopez, assaulting a woman, a lead officer with a rifle immediately shot him. Elena-Lopez, who had a heavy bike lock but no gun, was killed, as was 14-year-old Valentina Orellana-Peralta, who was hiding in a changing room with her mother and was struck by one of the officer’s rifle rounds that pierced a wall.

In another high-profile incident in July, a 911 caller reported a man on Hollywood Boulevard was “screaming and harassing people” with “what looks to be a pistol in his hand.”

When officers ran up to the suspect, Matthew James Sova, in front of a McDonald’s near the busy tourist intersection of Hollywood Boulevard and Highland Avenue and he raised his hand in their direction, they immediately shot him.

Sova did not have a gun, but a butane lighter with a pistol-like grip. He was pronounced dead at a hospital.

LAPD officials have recently lamented a recent rise in the number of police shootings, especially of individuals who are not armed with firearms, and have said they are revisiting training — including in the use of less-lethal weapons like projectiles and Tasers as alternatives to deadly force.