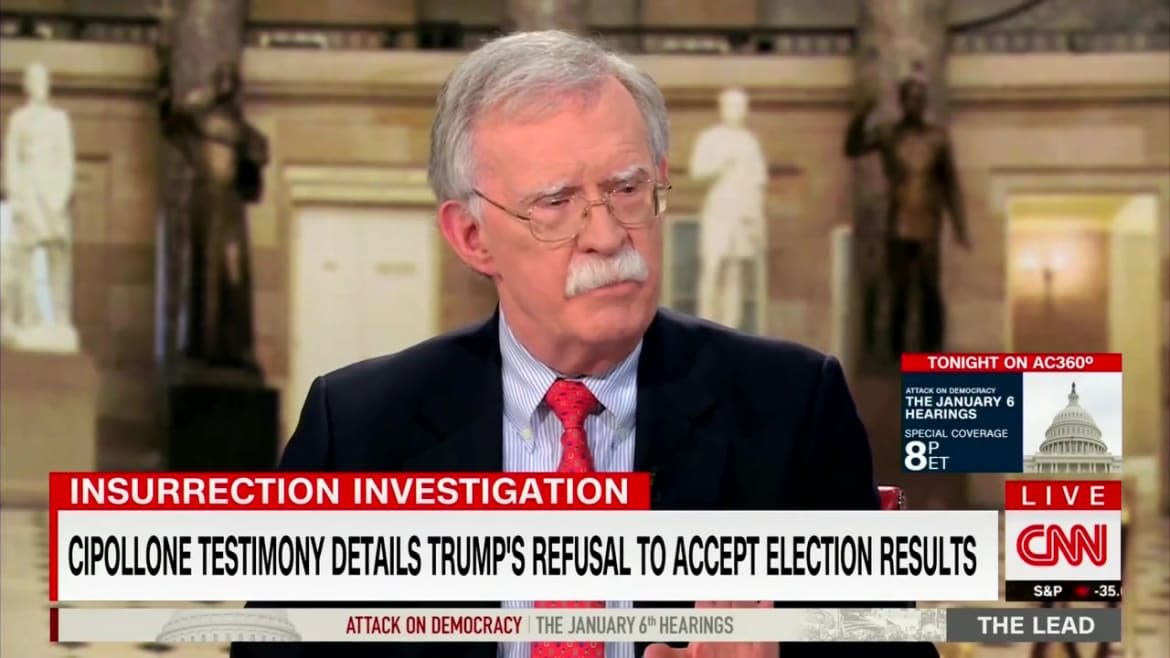 “It takes a lot of work” to overthrow a foreign government and seize power, the lifelong foreign-policy hawk declared.

According to the ex-Trump official, though, it would be a mistake to describe the ex-president’s efforts to overturn the 2020 election as a “carefully planned coup d’état” to retain office.

“That’s not the way Donald Trump does things,” Bolton told anchor Jake Tapper. “It’s rambling from one half-assed idea to another. One plan that falls through and another comes up. That’s what he was doing. As I say, none of it is defensible. But you have to understand the nature of what the problem of Donald Trump is.”

Disagreeing with the former ambassador to the United Nations, Tapper noted that “one doesn’t have to be brilliant to attempt a coup,” prompting the architect of the Iraq War to humblebrag about his past coup-planning efforts.

“I disagree with that,” Bolton declared. “As somebody who has helped plan coup d’état—not here, but other places—it takes a lot of work. And that’s not what he did. It was just stumbling around from one idea to another.”

The former Trump adviser continued: “Ultimately, he did unleash the rioters at the Capitol, as to that, there’s no doubt. But not overthrow the Constitution, to buy more time to throw the matter back to the states to try to redo the issue. And if you don’t believe that, you’re going to overreact.”

A few minutes later, Tapper circled back to Bolton’s casual admission that he’s been involved in international coups. “When we were talking about what is capable, what you need to do to plan a coup, and you cited your expertise in having planned coups,” the CNN anchor began.

“I’m not going to get into the specifics, but,” Bolton laughed, before Tapper asked: “Successful coups?”

The unapologetic war hawk went on to note that he wrote about Venezuela in his latest book, adding that it “turned out not to be successful.” During his time as Trump’s national security adviser, Bolton backed an unsuccessful attempt to oust Venezuelan dictator Nicolas Maduro in 2019, which featured a “ridiculous” failed coup that was quickly foiled.

“Not that we had all that much to do with it, but I saw what it took for an opposition to try to overturn an illegally elected president. And they failed. The notion that Donald Trump was half as competent as the Venezuelan opposition is laughable,” Bolton continued.

“I feel like there’s other stuff you’re not telling me,” Tapper shot back.

“I’m sure there is,” Bolton chuckled before pivoting back to Tuesday’s hearing.