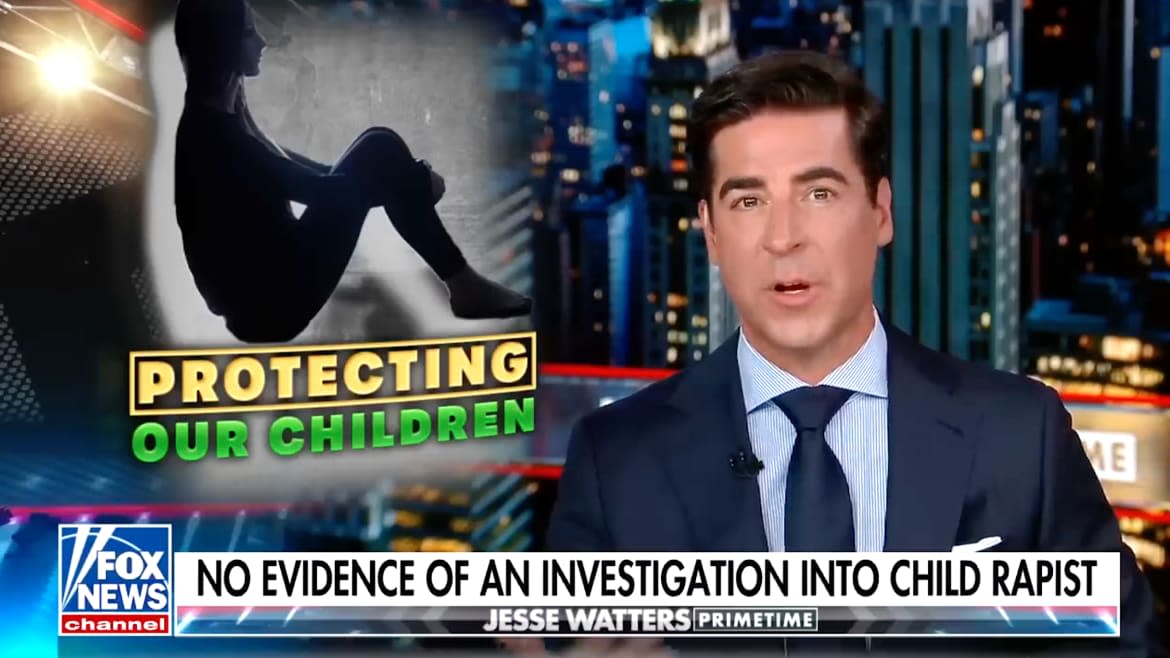 On Monday evening, Fox News host Jesse Watters spent the opening segment of his primetime show suggesting the case of a 10-year-old Ohio girl who was forced to travel to Indiana to get an abortion after she was raped was fabricated to benefit a left-wing agenda.

On Wednesday, that girl’s alleged rapist was arrested.

After laying out the details of the “heinous story,” Watters played clips of CNN and MSNBC hosts, as well as President Joe Biden and Vice President Kamala Harris, pointing to the girl’s dire situation as an example of why abortion bans without exception are so harmful. “This isn’t some imagined horror. It is already happening,” Biden said in his remarks. As they spoke, Fox News ran phrases like “Media Ran With Story of 10-Year-Old Pregnant Girl” and “Kamala Has Been Fooled Before” in the lower third of the screen.

“Obviously this is a heartbreaking story,” Watters said, before echoing North Dakota Gov. Kristi Noem by wondering aloud, “Why isn’t anybody asking about bringing the child rapist to justice?”

Watters said that his show “decided to investigate this alleged child rape, but we quickly found out that authorities in Ohio haven’t even begun a criminal investigation into the rape,” adding, “This doesn’t make any sense. No one reported this child rape to law enforcement?”

“You would think the story of a sexual abuser roaming free assaulting 10-year-olds would raise quite a few concerns in small town Ohio, but no one seems to be doing anything about it,” he said later. “No one even knows anything about it. Local media outlets aren’t even alerting the public. There’s a monster on the loose and from what we can find, no local newspaper or TV station picked up the story.”

The host even suggested that doctor who originally reported the pregnancy by rape of avoiding the press and accused her of having a “history of not reporting abuse cases to the police.”

“So where do we stand?” Watters asked at the end of the segment. “If there’s a 10-year-old child abuser out there on the streets of Ohio, he needs to be brought to justice. And if so-called doctors are covering up child rape, they need to be prosecuted. But if this horrific story isn’t accurate and the abortion doctor and the Indianapolis Star are misleading us? And the mainstream media and president of the United States seizing on another hoax? Then this is absolutely shameful. And fits a pretty dangerous pattern of politically timed disinformation.”

But while Watters and his team had “no luck” confirming the story, The Columbus Dispatch did the reporting required to confirm on Wednesday that 27-year-old Gershon Fuentes was arrested on Tuesday after confessing to raping the child on at least two occasions.

According to Detective Jeffrey Huhn, authorities were “made aware of the girl’s pregnancy through a referral by Franklin County Children Services that was made by her mother on June 22.” She underwent an abortion procedure in Indianapolis eight days later.

Of course, Watters was far from the only right-wing figure to dismiss the story as too horrific to be real.

On Tuesday, Watters’ Fox News colleague Dan Bongino shared the segment on various platforms with the caption, “Yet Another MAJOR Liberal Media Story Is Looking Like B.S.” And former Trump adviser Kellyanne Conway appeared on Fox News to compare the story to everything from “Russia collusion” to the Jussie Smollet case, calling it “too rich to verify.”

“There is no shortage of 10-year-old rape victims,” Fox host Emily Compagno said in that same segment. “There are so many monsters out there. What I find so deeply offensive, they had to make up a fake one.” Similarly, the Wall Street Journal editorial board published an op-ed with the headline “An Abortion Story Too Good to Confirm,” which referred to the case as a “fanciful tale.”

Even Ohio Attorney General Dave Yost told Watters during an interview on Fox News this week that he had not heard a “whisper” about the case since it was first reported and later said it was likely a “fabrication.”