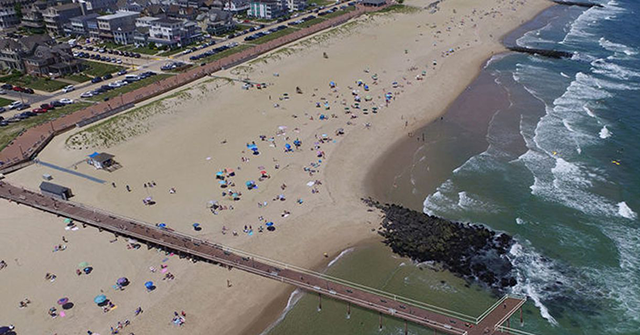 A community along the Jersey Shore established as a Methodist retreat in 1869 is building a pier out of its boardwalk shaped like a cross, prompting outrage from the neighboring LGBTQ+ enclave, NJ Advance Media reported Monday.

Ocean Grove, New Jersey, broke ground on a project to restore a pier jutting out of the boardwalk in July that will feature a design that resembles a cross from above. The Ocean Grove Camp Meeting Association, the Methodist organization that founded the community and still owns most of the land, has said that the design is an “improvement” that will allow more people to enjoy being out over the water, compared to the pier that it will replace. The project is part of larger restorations still ongoing since Superstorm Sandy devastated much of the Jersey Shore in 2012.

Ocean Grove is located next to Asbury Park, New Jersey. Beachgoers can walk the boardwalk out of one town into the other.

Asbury Park — also founded as a Methodist enclave — was once a working-class community that has seen high levels of wealthy developer funding on its beachside, changing the demographics of the area and, according to some critics, pricing local black and Hispanic communities out of their own neighborhoods. That process has led to the development of a thriving LGBTQ+ tourism industry, including hotels and clubs that cater to the community.

The cross-shaped pier has ignited a clash between these two communities, as a local decries the project as “Christian bullying,” NJ Advance Media reported.

“Members of the small seaside town’s LGTBQ+ community and allies are saying the cross crosses a line, but many are afraid to voice their grievances with the Camp Meeting Association, said Douglas Grote, a local resident and retired Presbyterian pastor,” the article read.

The Camp Meeting Association owns the land the pier is being built on, so it does not legally count as a government project and does not require municipal approval.

“Since the pier project did not have to go through local officials for approval, many residents were surprised by the new cross-shaped pier design, said Shane Martins, an attorney who sits on the Neptune Zoning Board and lives in Ocean Grove,” the NJ.com report continued.

Martins, who is gay, voiced concern for others regarding the issue.

“Once this pier is built like a cross, I believe that will be the point of a no return,” he commented. “To say that cross doesn’t represent Christian nationalism, anyone who says that isn’t being honest.”

Martins did not elaborate on defining “Christian nationalism” or specify objections LGBTQ+ advocates would have to the cross, a symbol of the death and, Christians believe, resurrection of Jesus, who the Gospels do not quote ever discussing LGBTQ+ people.

Ocean Grove has been part of the larger municipality of Neptune since 1979, when the New Jersey Supreme Court ruled its charter violated the separation of church and state and prohibited it from governing itself. Small, but unsuccessful, attempts to secede have occurred throughout the following decades. Methodist residents still organize Sunday services on the boardwalk, weather permitting, and maintain a tent community around the community’s Great Auditorium. 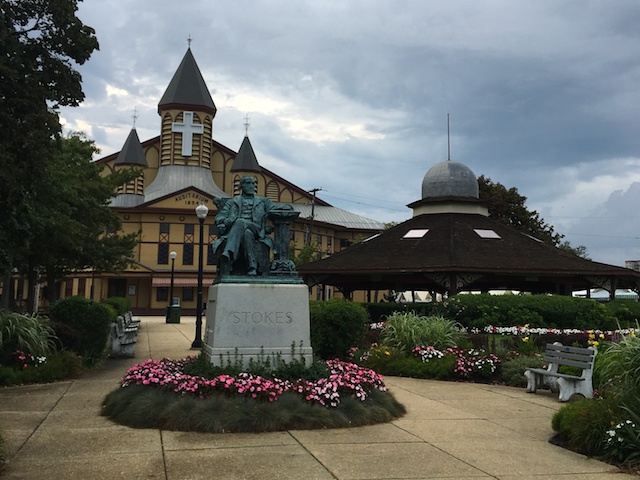 While Ocean Grove’s Methodists have maintained a tradition in the area for over a century, the neighboring left-wing community in Asbury Park is a new development, one that has prompted outrage from the working-class former residents displaced by it. Asbury Park’s east and west sides are divided by train tracks, and the luxury developments, hotels, and art scene largely exists in the east, next to the ocean. The far-left New York Times newspaper began touting Asbury Park as “the next gay enclave” in 2000, citing real estate agents who began seeing a wave of “urban professional” LGBTQ+ people heating up the housing market.

Housing affordability projects have failed, largely due to corruption, prompting even more outrage against locals.

“People who are here, who have been here all their lives, are just being pushed aside,” Tracy Rogers, the head of the Asbury Park Affordable Housing Coalition, said at a press conference in May, according to the Asbury Park Press, which had just revealed $2 million in affordable housing funding had been “mismanaged.”

Environmentalists have also protested the rapid growth of luxury developments in Asbury Park as a threat to the local nature — in particular, the sand dunes that can help prevent mass flooding, a particularly acute concern in light of damage caused by Superstorm Sandy.

As of April, hundreds of new “luxury” developments are in the works in Asbury Park.

In Ocean Grove, pier construction is reportedly set to begin in weeks.