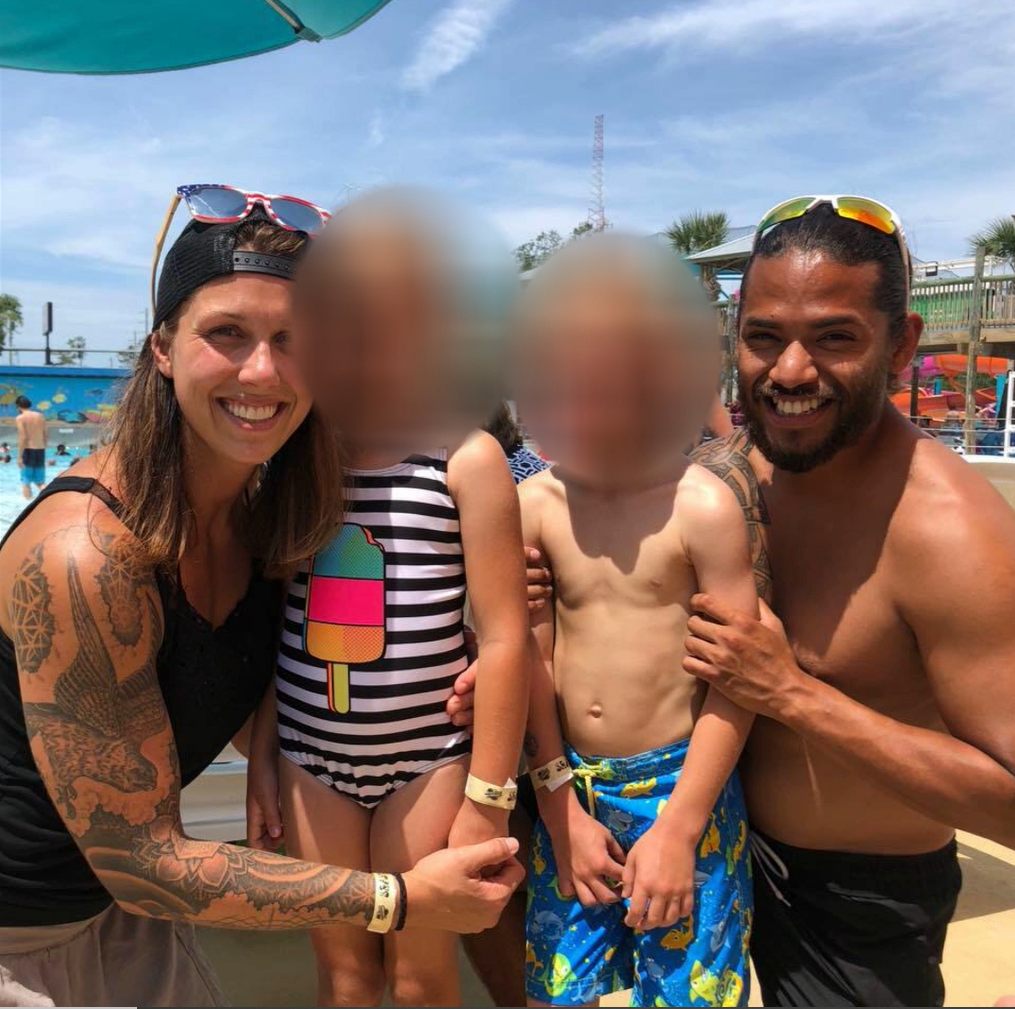 In a twist in the Jared Bridegan murder mystery, police reports reveal his ex-wife’s new husband was investigated in connection with an animal cruelty complaint after a beloved neighborhood cat mysteriously turned up dead.

Shanna Gardner-Fernandez, 35, and Mario Fernandez, 34, bought a home in an upscale suburb of Jacksonville Beach, Florida, shortly before they tied the knot in April 2018 in a modest courthouse ceremony.

But their relationship with some of their neighbors took a dark turn weeks after moving in when Apollo, a black and white cat who had become an adored member of the community, was fatally shot with a BB gun.

Shortly after the killing, the owner informed Fernandez of Apollo’s passing. Fernandez allegedly responded by callously telling the heartbroken neighbor “how much he disliked cats,” according to a police records.

Shanna Gardner-Fernandez poses with her husband, Mario Fernandez, and her twins from her marriage to Jared Bridegan.
(Facebook)

The Microsoft executive was gunned down Feb. 16 in front of his 2-year-old daughter, Bexley, on a wooded stretch of road after dropping off his 10-year-old twins with Gardner-Fernandez at her home about two miles away. He had stopped his Volkswagen Atlas to remove a tire in the middle of the road.

The software designer shares Bexley and London, 1, with Kirsten Bridegan, his second wife.

The Jacksonville Beach Police Department has not publicly named a person of interest in the father of four’s execution, but a law-enforcement source told Fox News Digital that Gardner-Fernandez and her husband remain suspects. They have not been charged with any misconduct in connection with the slaying.

A photo combination of Kirsten and Jared Bridegan with their daughter, London, and his ex-wife, Shanna Gardner-Fernandez.
(Fox News Digital)

Bridegan and Gardner-Fernandez were locked in near-constant litigation over their children since their divorce. The venomous legal wrangling only ended with the tech manager’s death.

Gardner-Fernandez, the heiress to the Stampin’ Up! paper-craft fortune, married her new husband, a part-time personal trainer, about three years after her acrimonious split from Bridegan.

But the newlyweds’ fresh start on the quiet cul-de-sac was soon overshadowed by the baffling cat killing. A neighbor had taken in the affectionate stray in 2013, regularly feeding him and letting him sleep on his back porch, according to police reports.

The loving feline soon became a fixture on the street, a source told Fox News Digital.

A photo combination of Shanna Gardner-Fernandez showing off her muscles and her with her husband, Mario Fernandez.
(Facebook)

But on Nov. 30, 2018, the neighbor noticed blood on Apollo’s right leg, according to the report.

He scooped up his suffering companion and took him to the vet. An X-ray revealed that the feline had been shot with a BB gun.

After the wound was treated, Apollo was still lethargic and in pain. A few days later, the worried owner returned to the vet for more X-rays and discovered that Apollo was also struck in the abdomen: the pellet had ripped through his internal organs. On the advice of the vet, Apollo was put to sleep.

The grieving owner, who had shelled out more than $1,800 to try to save Apollo, called police on Dec. 4, 2018, and reported the incident to Officer Allan Ford, according to records.

Weeks earlier, Fernandez had been feuding with neighbors over the feeding of stray cats near his home. A “very aggravated” Fernandez spoke to a cop from the Jacksonville Beach Police Department on Dec. 3 after calling to report the cat nuisance, the report says.

“He said he had cats in his backyard and it was making his dog bark in the middle of the night,” Officer Kelsey Eberle wrote, according to the documents. “Fernandez also said he had tried putting pepper spray on the fence as well as shooting the cats with a BB gun.”

The officer told Fernandez that shooting a cat with a pellet gun was inhumane, and he could be charged with animal cruelty.

That’s when Fernandez asked the officer if he knew that his neighbor’s cat had died a few days earlier from a pellet gun injury, adding he “didn’t want harm to come to an innocent animal.”

Shanna Gardner-Fernandez and her husband, Mario Fernandez, pose in a car. Her ex-husband, Jared Bridegan, was fatally gunned down on Feb. 16, 2022.
(Facebook)

Fernandez said the cat was ambushed around the same time the school bus arrived to unload high school students, suggesting that one of the teens was responsible, the report says.

Other neighbors said they knew Fernandez had a BB gun with a scope because he had bragged about using it to kill squirrels.

Officers Ford and Eberle tried to speak to Fernandez three more times as part of their investigation — but he refused and police closed the unsolved case, the report says.

It wasn’t Fernandez’s first run-in with neighbors over the clutter of cats that prowled near his home.

A poster announced a $55,000 reward for information about the unsolved murder of Jared Bridegan.
(Jacksonville Beach Police Department)

The same month that Apollo was shot, a 70-year-old woman was feeding the strays as she’d done for years when Fernandez made her uncomfortable and she called the police.

Fernandez had menacingly walked his pit bull near her to “intimidate and scare off the cats she was feeding because he did not like her doing that across the street from his house,” the report says.

The cop spoke to Fernandez who insisted there was “no malicious intent, and he was merely walking his dog.”

The twins also raised concerns about Fernandez to Bridegan in September 2018 — years before Bridegan’s murder.

Their daughter had complained that Fernandez “was grabbing me like hard and I do not like it” Bridegan wrote in a concerned email to Gardner-Fernandez.

“Thanks for the email. I know exactly what [our daughter] is talking about, and it has been addressed,” his ex-wife responded, according to the email exchange obtained by Fox News Digital.

A criminal defense attorney representing Gardener-Fernandez and Fernandez forwarded a request for comment to Linda Luchetti, a media specialist. “At this time, Shanna and Mario decline to participate,” she wrote.

Kirsten Bridegan previously told Fox News Digital that she would not give up until her husband’s killers are brought to justice.

“Not only was this an attack on my husband and his life, it was an attack on the family we built together, and I won’t take it lying down,” she said. “I will keep fighting until the end. Whether it takes six more months or six more years, I will continue fighting for him and the kids.”