It Took Me 40 Years to Watch the Movie ‘Diva.’ It Was Worth the Wait. 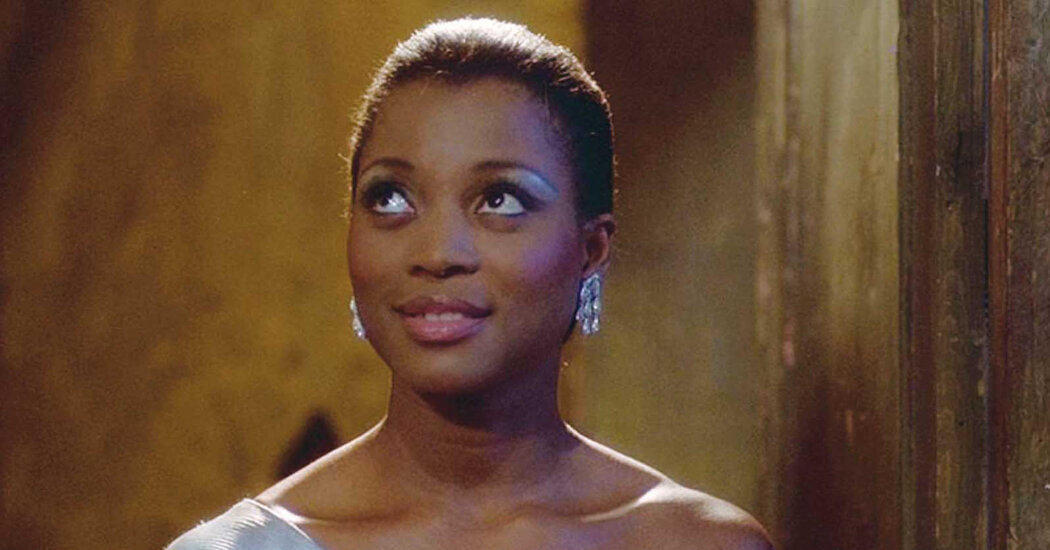 For years, my friend Mark has been urging me to see “Diva.” Unless he was severely mistaken, he wrote in an email, “you will love” it. Well, 41 years after its debut in France, “Diva” is back on a big screen — Film Forum’s — for a week, restored and ready to prove Mark right. I did love it. My fate was sealed the minute some poor lady stumbles off a train and staggers through the station in a snazzy shirt dress. She’s not wearing any shoes, and Chantal Deruaz, the actor playing her, musters what distress she can for the chase that ensues. It ends with her collapsed on a Paris street, because a puckish, punky blond — he looks a lot like Flea — has flung an object in her back, as one might a card in a magic show. Seems like an ice pick. But it’s an awl. An awl.

Here’s instant evidence of this movie’s ravishing, style-soaked priorities. Now, some Hollywood type might’ve opted for a gun. But in the mondo chic of Jean-Jacques Beineix, the murder weapon is something you’d use for piercing leather. And the character dies in daylight, with only a whiff of drama. The soundtrack’s accordion, bass, drums and guitar give her a woozy rock ’n’ roll micro-funeral. This is about 12 minutes in, and I was already ecstatic. What actually got me, though, was this poor, glamorously doomed woman’s final act. She slips something into one of the mailbags on the protagonist’s motorbike.

In part, what’s so delightful about this moment is the blasé purpose with which it’s been planted. But it’s not until a few scenes later that a series of jump cuts and some expository dialogue reveal that this woman hasn’t left behind a bag of coke or some other murder weapon. It’s just … a cassette tape. And because this movie’s young protagonist, Jules (Frédéric Andréi), is so ardently consumed by his fandom for an American opera star, it takes more than half the film for him (and us) to find out what’s even on the tape. And the woman who dropped it into his mailbag had faith enough that the postal system would come through for her. That’s what I’d been missing out on all these years: a movie so supremely its own thing that it seems to be making itself up as it goes, operating at the height of Beineix’s — or really anybody’s — cinematic imagination, and with an oblong belief in the redemptive potential of bureaucracy.

The obsession story kicks off the movie. Jules parks his mail-mobile and heads into one of those run-down teatros whose shabbiness imparts a kind of glory, the sort of ruin whose functionality makes the present feel like the future. Indeed, Jules has come not only to watch his beloved soprano, Cynthia Hawkins (Wilhelmenia Fernandez), perform the big aria from Alfredo Catalani’s “La Wally,” but to surreptitiously record her performance. So you have this old-ass opera being mounted in an all-but-abandoned art palace, on the one hand; and this guy, on the other, using state of-the-art technology to purloin the singing. This scene, to me, is the invention of 1980s pop cinema.

CHUCK KLOSTERMAN BLASTS OFF his new book, “The Nineties,” with an assertion that this invention happens with the opening title sequence of Paul Schrader’s “American Gigolo,” which opened in February of 1980. It’s a throwaway assertion that’s really stayed with me. I’m with him. It’s just that Schrader’s movie — its materialist flash; its assertion of consumer capitalism as the new carnality — is a bridge to the ’80s from the previous decade. “Diva” is the 1980s by Immaculate Conception. It feels like the 1970s were incinerated and a movie like this is what rose from their ashes, fully formed.

It’s not like Sidney Lumet’s film of “The Wiz,” from 1978, where New York’s landmarks and topography and attitude are surreally, stupendously yet soporifically turned in on themselves. Beineix wants out of the slump and torpor. The junky beauty of his France, the beauty of the junk — they’re a jolt. Jules lives inside what looks like a parking garage. That’s where he reclines in a beach chair and listens to his bootleg of Cynthia, like he’s in a pool of Calgon (it was a thing back then). And when one of the parties looking for that tape wrecks his place, the trashed result still seems fit for the Louvre.

The ancient thrives alongside the avant-garde and the cool: the shots of two menacing Taiwanese opera pirates in aviator shades taking in Cynthia and eventually a lot more. Jules befriends a couple of artistes — Richard Bohringer and Thuy An Luu — who share a vast warehouselike space where he cooks in a scuba mask and she swings in a hammock and roller skates to and fro; this is what we’d call “downtown theater.” It makes all the sense in the world here because, in “Diva,” everything goes. The Phare de Gatteville lighthouse, in Normandy, is filmed head on so that it looks, for all eternity, like a dildo with stone testicles. An antique Citroën becomes a fetching plot device. Jules’s new moped doubles as a genre-movie gimmick that weds classicism and modernity.

The classical keeps facilitating the modern. Take the chase between that moped and a cop. I didn’t think I could find this movie more enthralling or impressive. Then these two go at it. The pursuit starts on the streets, vrooming through the arcades along Rue de Rivoli, plunges into the Métro and, fittingly for this movie, terminates at the feet of the Paris Opera. When Jules motors down into the subway, most cops would give up. This one abandons his car and uses his feet. I haven’t seen anybody want to catch anything this desperately and this unsuccessfully since Wile E. Coyote. You can imagine Tom Cruise refusing to relent, too. But after Jules gets away, you’d never catch Cruise this doubled over and out of breath.

One extraordinary aspect of this sequence is how many commuters appear truly shocked to find themselves in the middle of it, to be leaping out of its way! Another feat? The fact that a camera operator, taking orders from the cinematographer Philippe Rousselot near the beginning of his innovative excellence, has to dodge commuters himself while also keeping up with a motorbike and a sprinting cop — on stairways; steep ones! People are always making lists of the great movie chases. “Bullitt” and “The French Connection” and “Ronin” are reliably near the top. This one’s rarely on them. Any list that doesn’t rank it way up there, let alone one that completely omits it, must be joking.

I don’t want to talk about this movie like it’s plot-action-plot. The story’s not unimportant but the peculiar genius at work devised a perfect balance between mood and mechanics. The narrative rides every tide of Beineix’s absurdist passion. Many a smitten critic has admired how the film manages to be both a thriller and an art movie, a raging exemplar of the French mode tattooed upon my heart: cinéma du look. It’s a style of visual acrobatics and theatrical décor; an approach that can take good acting or leave it (here, it’s definitely left). What I’d add to that astonishment is the way this movie almost never loses its moral, romantic, aesthetic and ethical priorities, how it needs them bound together. “Diva” is about two recordings: the one in Jules’s mailbag and the one he makes of Cynthia. Each tape represents a crisis for a woman.

For Cynthia, Jules’s tape violates her entire creative philosophy. She doesn’t believe in recordings of her work. And this man who claims to adore her might indeed love whatever she sings, but covetously. Those pairs of aviators wearing those two Taiwanese gentlemen — they know about Jules’s recording and want to make more of them, for money. This is an old American problem of commercial theft versus Black artists’ ownership of their work. Beineix gives it an intercontinental remix.

If the movie has a weakness, it’s that the romanticism is too forgiving of the ethics. Jules confesses — to making the recording and to stealing the silky gown Cynthia wears to do “La Wally” — and both times her umbrage dematerializes. Fernandez is a true opera singer, from Philadelphia, who effervesces with wonder and benign hauteur. She seems whisked into a fairy tale of European acclaim. Cynthia Hawkins, in fact, is such a redolently African American name that it seems especially odd that she isn’t more upset about her predicament. It’s a kind of artistic rape that the movie is too busy being brilliant, too busy du look-ing, to really sit with.

Of course, to be fair, this is also a movie about theft. There are as many ways of stealing here as there are camera angles. Plus, the other recording warns of more imminent sexual danger. Nadia, the woman killed so flamboyantly in the opening minutes, dies because she’s got breaking news about the health of Parisian law enforcement. It’s a kind of cutting-edge development that seems quaint today. Now, she’d just spill her beans on Instagram or Twitter and you’d lose half the movie. And maybe — maybe — she doesn’t get the awl.

But it’s a real testament to this movie’s thorough cultural absorption that it didn’t feel as blow-your-hair-back thrilling to me as it must have in 1982, when “Diva” opened in American theaters. This is now like a lot of things — original-formula MTV, TV and magazine ads, the movies of Hal Hartley and Jean-Pierre Jeunet and Michel Gondry and the Wachowskis — whereas when it premiered it was like little else. Beineix died in January and, aside from a small batch of documentaries, he didn’t make much after or like this; “The Moon in the Gutter” came two years later and his herculean, wave-making romantic epic “Betty Blue” three years after that. But Beineix’s legacy is a generation of artists who could turn dreams into all manner of lawlessness. So no, until last week, I had never seen “Diva” and yet so intense is its influence that, 60 seconds in, I was in a vat of Calgon, back in a memory I’d never actually had and punctured all the same. Awled, if you will. Grateful, too. Mark, thank you.