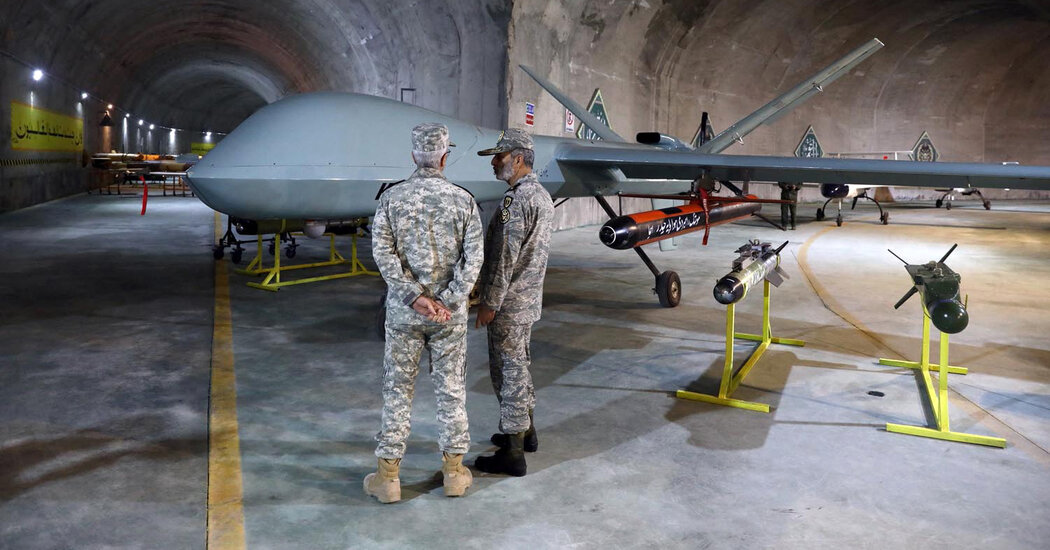 TEL AVIV — In the skies east of Israel, a few minutes before 2 a.m., four Israeli pilots scanned the horizon for two unmanned aircraft that were heading toward Israel from Iran. Suddenly, the pilots saw them — two triangular drones, each roughly eight yards wide, speeding westward at about 1,200 miles an hour.

“Positive identification,” one pilot told his commanders by radio. “I will shoot.”

Seconds later, both Iranian drones had crashed to the ground, shot down by two Israeli fighter jets in two locations above Arab territory.

The secret episode, which occurred on March 15, 2021, was one of the first successful examples of a fledgling military relationship between Israel, certain Arab partners and the United States — a project that President Biden is trying to cement into a more formal network during his visit this week to the Middle East.

Corroborated by two senior Israeli officials and recordings of the pilots’ communications, the episode exemplified how Israel, once isolated in the Middle East because of Arab solidarity with the Palestinians, is now working increasingly closely with several Arab militaries. It also illustrated how shared fears of Iran now supersede concerns in some Arab governments about the failure to resolve the Israeli-Palestinian conflict.

Over the past decade, Iran and its proxies in Yemen, Lebanon, Syria and Iraq have increasingly used drones to attack Israel, American forces in the Middle East and Sunni Arab states, including against oil facilities in the United Arab Emirates and Saudi Arabia this year.

While the biggest long-term threat from Iran is its nuclear program, Tehran’s opponents are concerned by the drones because their small size and relatively slow speed make them hard to detect and intercept — and because they are already causing damage.

Announced last month by Israel, the new initiative, the Middle East Air Defense project, is an attempt to shore up the region’s defenses against drones. The idea is to allow its participants to alert one another instantly about incoming drone attacks, through the coordination of the U.S. Central Command. Israel has already warned some Arab countries about an imminent drone strike, a senior Israeli defense official said.

In the future, Israel hopes participants will be connected to the same radar system, eliminating the need to send one another warnings. “Everybody will see the same feed on their screen,” said Brig. Gen. Ran Kochav, chief spokesman for the Israeli Army, and a former commander of Israel’s air defense.

Some of the coordination is already happening. In the March episode, Israel was also able to successfully request permission from a nearby Arab country to enter its airspace and intercept the drones before they crossed Israel’s borders.

Israeli officials declined to identify that country, in order to avoid causing it embarrassment for allowing another air force to operate above its sovereign territory. But it is likely to be Jordan, the only friendly country on Israel’s eastern border.

This secrecy highlights how the efforts to create a more formal network are still at a tentative phase. Israeli officials hope Mr. Biden will make his own formal announcement about the project during his visit this week. But Arab participants are reluctant to confirm their involvement, let alone advertise their participation in a fully fledged military alliance with Israel.

“There is a deal of cooperation, and it is here to stay,” said Abdulkhaleq Abdulla, a Dubai-based expert on Gulf politics and diplomacy. “But it is way short of developing into a unified system.”

Bilateral military coordination between Israel, Bahrain and the U.A.E. — and possibly even Saudi Arabia, which currently has no formal ties with Israel — is feasible, Mr. Abdulla said.

But “I don’t think anybody is in the mood for a regional alliance,” he added.

Nevertheless, the fact that such a concept is even being discussed highlights the dividend derived from three diplomatic deals that Israel sealed with Bahrain, Morocco and the U.A.E. in 2020, with the support of the Trump administration.

Prompted in part by mutual anxiety about Iran, the deals allowed those countries to markedly increase trade and investment. They also encouraged Egypt and Jordan — which established relations with Israel decades ago but never cemented them properly — to work more closely with their neighbor.

But the most eye-catching outcome has been the growing military relationship between the new partners.

The Israeli Defense Ministry has signed public agreements with its Bahraini and Moroccan counterparts, making it easier for the three countries to coordinate and share military equipment.

In a move that would have been unthinkable three years ago, Israel has stationed a military liaison in Bahrain, as part of a separate regional initiative to combat piracy. The Israeli and Bahraini navies also trained together in the Persian Gulf in November, alongside the U.S. Navy.

The chief of the Emirati Air Force also attended an Israeli military exercise in October, and Israeli officials hope the Emirates may eventually participate in an annual air training exercise in Israel alongside several Western air forces.

Of these growing military ties, officials and analysts say the anti-drone project is so far the most concrete, and is driven by a real desire for better coordination.

While Israel’s new Arab partners do not see Iran’s nuclear program as being as dire a threat as Israel does, all of them are concerned by drones, said Maj. Gen. Amos Yadlin, a retired senior air force officer and former head of Israeli military intelligence.

But a joint drone defense system, limited in scope, “represents the regional needs and requirements of all the parties,” he added.

Iran began to use drones about a decade ago, investing vast sums of money to design and construct its own models instead of buying them from China, said Alon Unger, a former drone operator for the Israeli Air Force who runs an annual drone convention in Israel.

The drones have a lot of utility for Iran. They can carry weapons to cause damage directly, they can be used for surveillance and they can also carry small payloads, delivering things like guns and explosives to Iranian proxies who would otherwise be out of Tehran’s reach.

In 2019, an Iranian drone launched from Syria, an Iranian ally, was brought down over Israel, just north of the occupied West Bank. Investigators later discovered it had been carrying a tranche of explosives that Israeli officials concluded were intended for Palestinian militants in the West Bank.

Hezbollah, the Iran-backed militia in Lebanon, fired three drones toward Israeli gas rigs this month in an area of the eastern Mediterranean claimed by Lebanon. Israeli officials said that the drones, which were quickly intercepted, did not carry arms of any kind and that they were launched only to show that Hezbollah is able to reach a point considered strategic and sensitive.

The Iranian drones present Israel with a new technological challenge. The Israeli defense establishment has sophisticated air-defense mechanisms capable of intercepting rockets fired by enemies in Gaza, Lebanon and Syria. Israel also has a complex system of sensors able to detect tunnels that Palestinian and Lebanese militants sometimes dig under Israel’s borders.

But those defenses are relatively inefficient against the drone.

A drone is “a relatively slow aircraft with a low radar profile,” Mr. Unger said. “It is difficult to identify its launch or its course, or to shoot them down using fast warplanes, which were built to contend with enemy fighters in aerial combat.”

An Iranian drone attack on Aramco, the Saudi national oil company, in September 2019, heightened a sense of alarm about the growing drone threat — not only in Israel, but in the United States and across the Sunni Arab world.

That helped galvanize American and Israeli efforts to create a regional anti-drone cooperation program. Contact and cooperation already existed on a small, clandestine level between Israel and some Arab countries, officials say. But the sealing of the landmark diplomatic rapprochements in 2020, collectively known as the Abraham Accords, allowed for deeper military relationships that were gradually made public in recent months.

Already, these stronger ties have enabled the Israeli Air Force to train in the skies above friendly Arab countries, two Israeli officials said — a game-changing development for a force previously restricted to Israel’s congested and narrow airspace.

And in time, Israel hopes the benefits of such an alliance might make its Arab partners more open about their involvement.

“Need is the mother of invention,” General Yadlin said. And, he added, “The operational need of all the partners is to have a better defense.”