In West Africa and Beyond, Mali’s Famed Manuscripts Are Put to Use 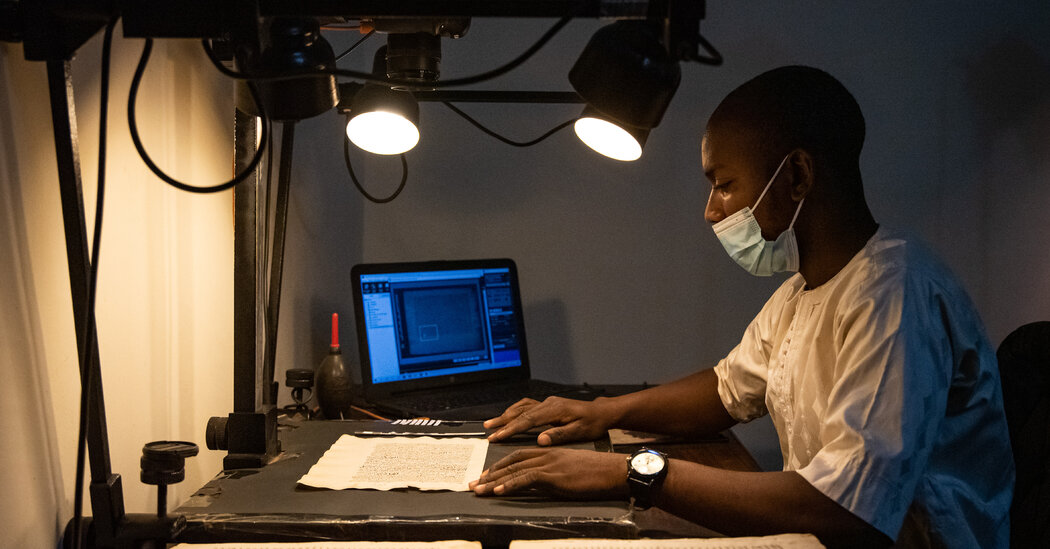 BAMAKO, Mali — In an air-conditioned room on a quiet tree-lined street in Mali’s capital, Bamako, three young men sat at desks with cameras mounted overhead, picked up one page of parchment at a time from tall stacks at their left, clicked the shutter button and then reached for the next page. Click. Flash. Repeat.

One of the men, Amadou Koita, said he had been doing this work for five years. But the job is far from complete. Rooms full of metal trunks crammed with manuscripts await him.

The documents are part of a trove of tens of thousands of old manuscripts — legal documents, copies of the Quran, scientific writings — that for centuries were conserved and passed down by the desert-dwelling families who owned them, or collected in libraries. Then, suddenly, they were in danger.

Now, after years of careful preserving, cataloging, and digitizing, more than 40,000 pages from one of Timbuktu’s biggest libraries have been made available for anyone to explore on Google Arts & Culture.

“Africans knew how to write before many outside Africa did,” said Andogoly Guindo, Mali’s minister of culture. “These manuscripts can throw light on part of Africa’s past.”

But bringing them to a wider audience faces significant obstacles. For the most part they are undecipherable to people not educated in the West African Islamic tradition — those unable to read Arabic as well as African languages written in modified Arabic script, known as Ajami. Only a tiny proportion of the documents are being translated because there are not many scholars with the skills to do it.

“There’s been very very little, marginal work on excavating the content of the manuscripts,” said Abdulbasit Kassim, a historian of West and Central Africa who specializes in manuscripts. “What exactly can the manuscripts tell us about African history? What can they tell us beyond the different phases of African history, from spirituality to the field of science, to medicine, mathematics, astronomy, astrology, logic, philosophy, esoteric sciences?”

West Africa’s wealth of manuscripts provide evidence of extensive written traditions in the continent stretching back centuries — in contrast to past claims by Western colonialists and scholars who characterized African societies as oral rather than literate ones.

The manuscripts from Timbuktu show that the city’s scholars had found that the earth revolved around the sun — having the insight at around the same time Galileo did — and used mathematics far earlier than scientists in other parts of the world, said Cynthia Schneider, co-director of the Timbuktu Renaissance initiative, which recently organized an exuberant event in Bamako, ending with a dance party, to launch the Google project.

The scholars also produced millions of pages of jurisprudence, and writings on the Prophet Muhammad, and on mysticism, she said.

But for modern purposes, the most useful portion of the Timbuktu manuscripts — which also contain travel diaries, correspondence and sex tips — might be those on how to govern justly, corruption-busting techniques and conflict resolution.

“Each problem has a solution in the manuscripts,” said Abdel Kader Haidara, a librarian who helped coordinate the rescue of the documents from Timbuktu. He pulled down his mask, revealing a bounteous mustache, downed his glass of attaya — sweet, strong tea — and put the mask back. “We have to use them.”

Mr. Haidara founded SAVAMA-DCI, a nongovernmental organization dedicated to the preservation of the Timbuktu manuscripts, which collaborated with Google on the project. The Bamako offices of the group house some of the manuscripts in specially made boxes to protect their leather bindings and fragile pages of calligraphy and illustrations, often of tiny, colorful flowers.

Segou, a river city in south-central Mali, was another center of learning and scholarship in the region. It housed the library of Omar Tall, a scholar, politician and military leader, born in the 1790s, whose library was seized by French colonial authorities and taken to Paris.

A few months ago in Segou, in the dry season, dozens of Muslim scholars and local personalities gathered in a high-roofed hall as Thierno Bashir Tall, a descendant of Omar Tall, read from a copy of a text preserved in several manuscripts. It was as if the scholar was speaking to them down the centuries. Fans whirred and prayer beads softly clacked as they listened.

Mr. Tall looked up from the copy of the manuscript, set down in a bold Arabic script. “Look at the old manuscripts our ancestors left us,” he said, smiling.

In the text, the scholar, using religious arguments, tried to resolve a conflict between the leaders of the Borno and Sokoto empires, one that shaped West Africa. Five translators rendered the version they were examining into French and Arabic, using three different manuscript copies.

Modern Mali is plagued by troubles of this kind too; a decade of fighting between jihadists and a mosaic of national and international military forces has often seen civilians caught in the middle.

Omar Tall composed his tract as he walked through the Sahara, a journey “so hard and tiring,” he wrote, made harder by his wife and brother being gravely ill. He cited Quranic verses, hadiths — sayings attributed to the Prophet Muhammad — and commentaries by Muslim scholars, all condemning clashes between believers.

The Segou scholars looked to his experience for inspiration on ending the modern conflict.

“What Sheikh Omar Tall did to bring peace to Borno and Sokoto — people from Segou can use these same tactics to talk to people from Mopti, and Bandiagara, and so on,” his descendant said, referring to areas of Mali, and switching between French and Bambara, the country’s most widely spoken language. “Without peace there is no development.”

His audience listened, some of the robed men wrapping woolen scarves tighter despite the 100-degree heat.

The city of Segou has mostly escaped the conflict that has torn through Mali in the past decade, but armed groups and abusive soldiers have wreaked devastation on nearby vulnerable towns and hamlets, and people in the city are fed up.

“They have to sit and talk,” said Malick Dara, who opened the Peace and Reconciliation Café so that people from different communities could do just that while enjoying plates of liver and tomatoes.

Back in the hall, many audience members agreed that the manuscripts could help bring peace, but some pointed out that translations into languages spoken by more Malians, like Bambara, would be more useful than French.

Others thought the guest list for the reading should have been expanded.

“You should invite the many villages living under jihadists,” said one, Oumar Cissé. “Listening to this would heal their hearts.”