In a Time of Conflict, Ukraine Entrepreneurs Make War Their Business 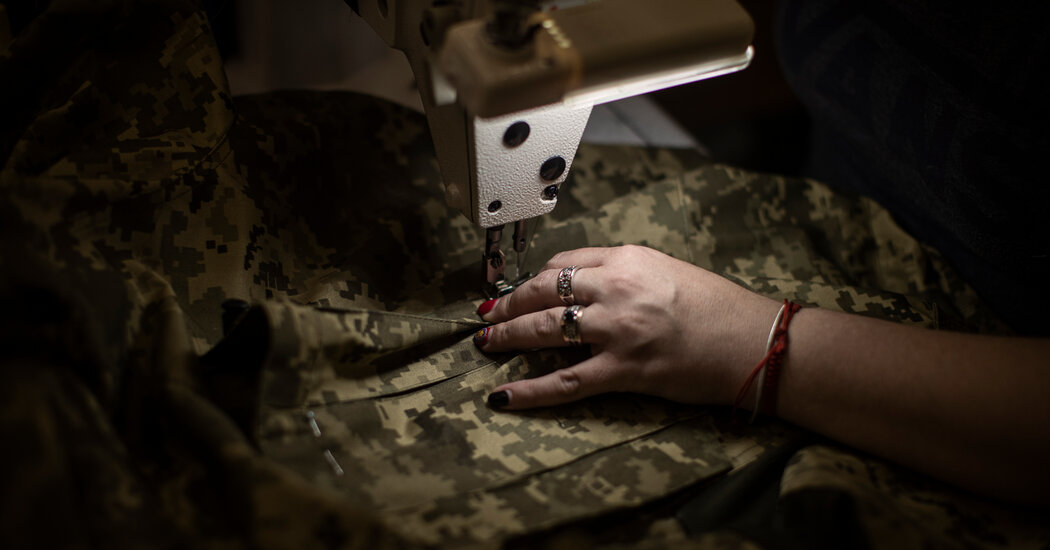 LVIV, Ukraine — Yuriy Zakharchuk once dreamed up combat costumes for the stage, designing everything from medieval armor to space battle suits.

But after Feb. 24, the day Russia invaded Ukraine, Mr. Zakharchuk decided to take his business from the realms of fiction into the real world of war brought to his home city of Kyiv.

His company’s transition to making body armor and helmets makes a kind of sense, he noted with a wry smile. “We have always provided protection for every need,” he said, “from the days of the Roman Empire to the fantasies of the future.”

More seriously, he added, his business, Steel Mastery, is experienced in developing gear that is light and suitable for long hours of wear. “We know how to make stuff comfortable,” he said.

Mr. Zakharchuk, whose company of 70 workers once provided costumes for thousands of customers in Europe and the United States, is not alone in the switch to militarization. Across Ukraine, many companies are adapting to life at war by making it part of their business.

In the southern city of Odesa, a local fashion brand had all of its divisions, even its lingerie seamstresses, sewing cloth vests to fit body armor plates.

In Lviv, some of the businesses that flocked to this safer western region of Ukraine are working on installing armor on existing vehicles, military uniforms, and, more secretively, ammunition.

“We have many businesses requalifying themselves to help the army,” said Volodymyr Korud, from the vice president of Lviv’s chamber of commerce. “Some are even involved in weaponry, but that is something we cannot discuss,” he said, for fear they could become military targets.

Many enterprises are working on a charitable basis to support Ukraine’s armed forces. But increasingly, businesses are looking to establish for-profit models that they can sustain throughout the conflict — and perhaps even once it ends, with an eye on export.

The Russia-Ukraine War and the Global Economy

A far-reaching conflict. Russia’s invasion on Ukraine has had a ripple effect across the globe, adding to the stock market’s woes. The conflict has caused​​ dizzying spikes in gas prices and product shortages, and has pushed Europe to reconsider its reliance on Russian energy sources.

Russia’s economy faces slowdown. Though pro-Ukraine countries continue to adopt sanctions against the Kremlin in response to its aggression, the Russian economy has avoided a crippling collapse for now thanks to capital controls and interest rate increases. But Russia’s central bank chief warned that the country is likely to face a steep economic downturn as its inventory of imported goods and parts runs low.

Trade barriers go up. The invasion of Ukraine has also unleashed a wave of protectionism as governments, desperate to secure goods for their citizens amid shortages and rising prices, erect new barriers to stop exports. But the restrictions are making the products more expensive and even harder to come by.

Prices of essential metals soar. The price of palladium, used in automotive exhaust systems and mobile phones, has been soaring amid fears that Russia, the world’s largest exporter of the metal, could be cut off from global markets. The price of nickel, another key Russian export, has also been rising.

Oksana Cherepanych, 36, said it was not only self-interest that fueled her decision to redirect her company from making hotel and restaurant uniforms into a manufacturer of Ukrainian regimental outfits.

“It’s also about saving jobs for our work force,” she said. “We need to motivate people to stay in our country by making sure they can find work here. That way, we support our country’s economy.”

Her plan has worked. Her company, Gregory Textile, based in Lviv, now has contracts to make uniforms for the Ukrainian military, as well as its air force. She was able to save the jobs of the 40 seamstresses she had on staff, and even added 10 new positions. She offered those jobs to women who fled fighting in Ukraine’s east.

And though the company is only making 60 percent of what it earned before the war, she said it is still turning a profit.

Others, like Mr. Zakharchuk, are using this moment of reinvention for missions that border on the quixotic. He is producing ceramic-plated body armor vests — a feat that involved the smuggling of a Soviet-era kiln and enlisting the help of octogenarian scientists.

Body armor typically consists of a vest made with bullet-resistant fabric that holds a plate of armor in the front and back. The simplest approach is to make the plates out of metal, a skill that would have been easy to tack on to a company specializing in costume armor. Instead, he decided to found a new venture, YTO Group, to produce ceramic body armor.

Ceramic plates are far lighter, and preferred by many military forces for the increased mobility they allow. But they require sophisticated technology and equipment to produce — none of which Mr. Zakharchuk had.

“I don’t know a lot of things,” he said. “But if I need something, I will find it. That’s my special skill.”

He first had to research how such plates were made — and then, how to obtain the required machinery. He combed job websites to find people with skills he thought might be relevant, then cold-called them to ask for advice.

Eventually he discovered he needed a vacuum kiln, which in Ukraine was mostly used to produce special ceramics for the country’s Soviet-era nuclear power plants.

He called factory after factory, facing a string of rejections. Some companies had already shut down, others apologetically informed him their facilities had been destroyed in the fighting.

After two months of searching, he found a nuclear power plant with a kiln, built in the 1980s and in disrepair. He took out a bank loan and bought it for $10,000.

The kiln, which can fit on the back of a small trailer, weighs more than 1,500 pounds. It consumes the same amount of energy that could power 3,000 apartments. But none of that was the problem.

The issue was location: The kiln was in a southern Ukrainian city occupied by Russia in March. Still, Mr. Zakharchuk was undeterred.

“We bribed all the Russian officers at the checkpoints there, and they helped us get it out. You could call it my very own ‘super-special operation,’” he joked — a reference to Russia labeling its invasion as a “special military operation.”

But even with the kiln, Mr. Zakharchuk still needed the know-how. So he turned to a circle of Ukrainian academics, ages 75 to 90, who were Soviet-era specialists in physics and extra hard metals.

“They have more than 50 years of experience,” he said, but their advanced age meant that “sometimes, it’s hard to communicate.”

Nonetheless, the initiative may pay off. His YTO Group has now produced test samples. If the company can scale up, Mr. Zakharchuk aims to sell the armor for about $220 to $250 apiece, roughly half what they cost elsewhere, he said.

In Lviv, Roman Khristin, 31, also ended up in the body armor business. The invasion devastated his consultant business, which advised on logistics and crisis management, after many companies fled the country.

Initially, he sought to help the war effort by delivering supplies, including pasta, medicine and fuel, to frontline areas. But he quickly burned through his resources and enthusiasm.

“Then I realized: I should be involved on the economic battlefield, not the physical war. I’m not a fighter, I’m not a soldier. But I can network, I can import and export. And I know how to start a business.”

That was when he turned to body armor. “At the beginning of the war, there was a need for 400,000 pieces of body armor. Now, it’s twice that. And as for availability, it’s not even half of that,” he said.

He bought a huge reserve of cloth needed to produce materials for bulletproof vests. His team has also tested and settled upon their own formula to produce metal plates inside them.

He hopes not only to contribute to sustaining Ukraine’s economy during the war, but also to provide himself an opportunity that could last beyond it. “Right now, we are starting a sales team to start working on exporting abroad,” he said.

Ms. Cherepanych also hopes to keep her new military uniform business, eventually spinning it off from her hotel and restaurant uniform business that she hopes to pick up again after the war.

On the sewing room floor of her trendy, brick-exposed offices, bolts of bright, colorful fabrics have been pushed to the sides, in favor of olive green, beige, and navy blue.

But she insisted they still keep an emphasis on style: “We want our military in something practical and comfortable — but also looks cool.”

As for Mr. Zakharchuk, he is now in the process of trying to raise $1.5 million from investors to help him repair his kiln and use it to ramp up production to his goal of 10,000 sets of ceramic plates a month. He has so far received 20 rejections.

As usual, that has not stopped him