In a First for the Air Force, a General Is Convicted of Sex Abuse 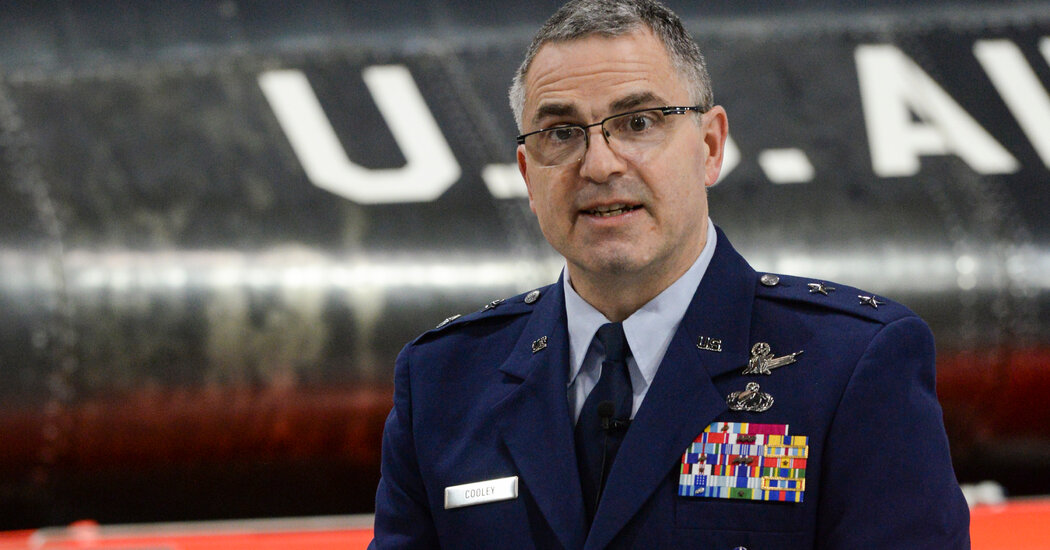 An Air Force major general was found guilty of forcibly kissing a woman in 2018, in the first court-martial trial and conviction of a general officer in the 75-year history of the military branch, its authorities said.

Maj. Gen. William T. Cooley was convicted of abusive sexual conduct on Saturday by Col. Christina M. Jimenez, the senior military judge in the case, at Wright-Patterson Air Force Base in Dayton, Ohio.

General Cooley was accused of abusive sexual conduct with three “specifications” and was convicted of the first one, for “kissing her on the lips and tongue, with an intent to gratify his sexual desire,” the Air Force said on Saturday.

Judge Jimenez found General Cooley not guilty of the other two specifications, including for forcing the woman, who is his sister-in-law, to touch him over his clothing and touching her breasts and genitals through her clothes, the authorities said.

Sentencing is scheduled for Monday. General Cooley faces up to seven years in prison and dismissal from the Air Force, but his rank could not be reduced as part of this process, said Derek Kaufman, a spokesman for the Air Force.

A lawyer for General Cooley, Daniel Conway, did not immediately respond to an email on Sunday.

The victim — who did not want her name used but consented to the disclosure of her family relationship to General Cooley — said in a statement after the verdict that “the price for peace in my extended family was my silence, and that was too high a price to pay.”

“Doing the right thing, speaking up, telling the truth, shouldn’t be this hard,” she said. “Hopefully it won’t be this difficult for the next survivor.”

Ryan Guilds, a lawyer for the woman, said that many changes over the last decade have made it less daunting for victims of sexual misconduct by military personnel to come forward. These changes include policy developments that better support accusers, greater sensitivity by military leadership to sexual assault, increased procedural protections for victims, and prosecutors who are more likely to believe survivors.

General Cooley’s conviction “is a hopeful sign, for sure,” Mr. Guilds said. “The reality, though, is that every survivor who decides to come forward and make that brave choice is going to confront a justice system that is going to be very challenging.”

He added, “In this case, it’s taken years to get where she is today, and I wouldn’t wish that journey on anyone.”

After an evening barbecue in Albuquerque on Aug. 12, 2018, General Cooley, who had been drinking, asked the woman for a ride, she told the court, according to the Air Force.

“During the short ride, she said he told her that he fantasized about having sex with her,” the Air Force said in its statement. “She alleged he pressed her up against the driver’s side window, forcibly kissed and groped her through her clothes. Cooley denied the allegation, pleading not guilty.”

The case began after the woman and her spouse reported the assault to the Air Force Office of Special Investigations in December 2019.

General Cooley formerly commanded the Air Force Research Laboratory, which develops warfighting technology for U.S. air, space and cyberspaces forces. He was responsible for managing a $2.5 billion science and technology program and an additional $2.3 billion in research and development, according to his Air Force biography.

In January 2020, Gen. Arnold W. Bunch Jr. relieved General Cooley from command of the research laboratory “due to a loss of confidence in his ability to lead, related to the alleged misconduct which was then under investigation,” the Air Force said. It added that, since then, General Cooley has been serving as a special assistant to General Bunch.