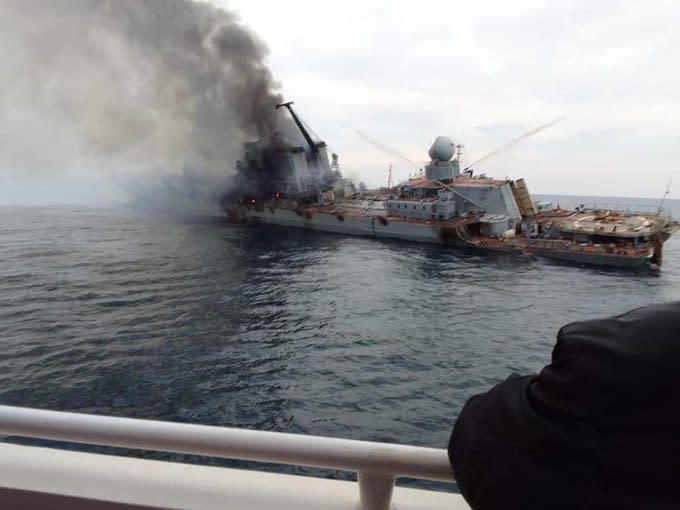 When reports first emerged last week of an explosion on the Moskva, Russia’s flagship in the Black Sea, posts purporting to be of the carnage and aftermath soon followed.

The ship was both a symbol of Russia’s strength as well as a key cog in its military operations. Its sinking and the unverified circumstances around the explosion — Ukraine said it hit the ship with missiles, Russia said ammunition damaged the ship and it sank in a stormy sea — quickly led to an appetite for anything that might show what really happened.

Most of the claims were quickly debunked by professional news organizations and amateur analysts, often referred to as the open-source intelligence community (OSINT for short). In some, the ship didn’t match the Moskva’s profile. Others were quickly found to be old videos.

But a couple of pictures that emerged in recent days are different. Images and a short video appeared to show thick black smoke billowing from a warship bearing a striking resemblance to the Moskva.

The photos were new. The ship was clearly a Slava-class cruiser, of which the Moskva was one of three. By using archive photos, the NBC News Social Newsgathering team matched the shape and infrastructure of the ship — including its dome-shaped fire-control radar, helicopter hangar, helipad and distinctive dark gray paint.

Some lingering doubts remain. NBC News could not determine who originally took the video or images, or why they are only being shared now. The Pentagon has also said the images cannot be verified.

But experts who spoke with NBC News said they believed that the photos, assuming they have not been doctored, showed the Moskva. The photos showed no signs of alteration.

James Stavridis, a retired U.S. Navy admiral, said there was a high chance that they showed the Russian vessel.

“In today’s world, with the ability to produce deep fakes of just about anything, I wouldn’t bet my life on an assessment,” he said.

“I would say this is in fact the Moskva. It certainly appears to be a Slava-class cruiser. They are utterly distinctive with the missile tubes up forward. No other Slavas or similar ships have been sunk in distress that I know of or can find. Occam’s Razor tells me this is very probably the Slava class cruiser Moskva.”

Bradley Martin, a senior policy researcher with the Rand Corp. and a former surface warfare captain in the U.S. Navy, said all available evidence points to the Moskva as the ship in the photo.

“There are no other ships of this kind that have been damaged, and the damage is consistent with the reports,” he said in an email.

“I don’t know if anything is doctored, but that is a Slava class,” he said. “They only have three of them, and we know that [the other two] are alive and well.”

The NBC News Social Newsgathering team also noted that one of the images circulating online showed the ship noticeably leaning portside and that a rescue tugboat could be faintly seen behind the Moskva spraying two streams of water into the air.

A low-quality, three-second video also showed a similar scene of the warship on fire, as a tugboat approached the vessel.

The recording ended abruptly when a man yells in Russian: “What the f— are you doing?”