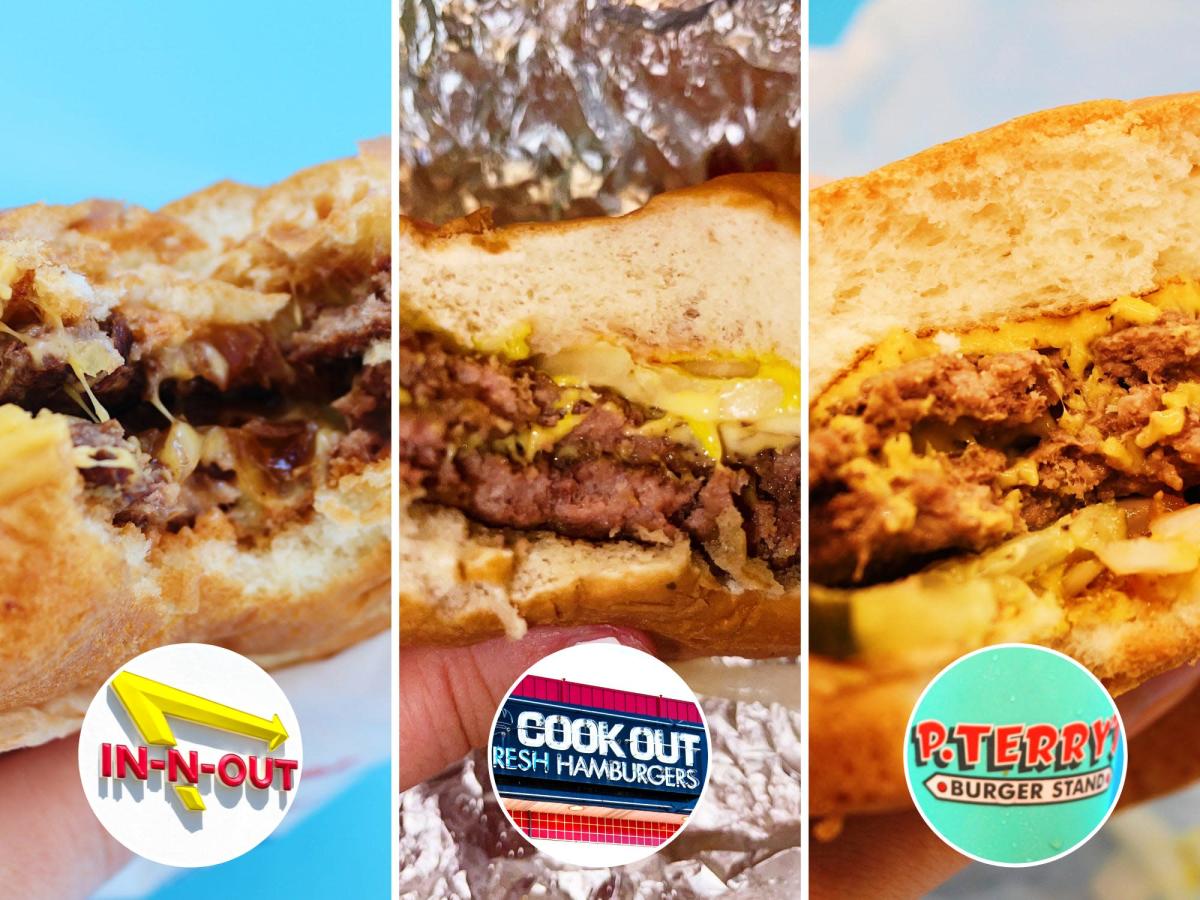 A double cheeseburger from Burger King cost me $2.29.

This sandwich was definitely worth the price. It was less than what I usually pay for my morning coffee.

It comes with two of the chain’s beef patties, American cheese, pickles, mustard, and ketchup on a sesame-seed bun.

It comes with one slice of cheese.

This burger was super filling, but I liked the other burgers I tried more.

Right away, I tasted the thick beef patties. The burger had traveled a little more than 15 minutes from my local Burger King to my apartment, but the meat was still juicy and the cheese nicely melted.

The pickle slices were thick and crunchy, and I enjoyed the sesame-seed bun, which added a nice textural element. But I thought there was just a little too much ketchup, which will likely vary depending on who’s making your burger that day.

It was also a little heavy for my liking. It filled me up a little more than I had anticipated before jumping into the rest of the taste test. Still, for a burger that costs just over $2, that might be more of an asset than a hindrance if you want a filling, inexpensive lunch.

In ninth place was Wendy’s double cheeseburger, which the chain calls a Double Stack. I ordered it for just $2.59.

It was about the same price as the burgers from McDonald’s and Burger King.

The toppings looked a little stingy, and they were clustered in the middle of the sandwich. I would have liked to see them more spread out.

The burger bun was fluffy and light, and the toppings had a ton of flavor.

But I had to get a few bites in to reach the toppings in the center.

The toppings themselves were amazing. I thought the pickles were the most flavorful out of the burgers I tried, and I liked the use of an onion ring rather than diced onion. Though I would have liked just a little more.

The McDonald’s double cheeseburger cost me $3.79.

It was slightly more expensive than Burger King’s version but had more toppings. It came with an extra slice of American cheese plus chopped onions, and it was still affordable.

I was interested to see if the added toppings would amp up the flavor.

I thought all the ingredients came together well in this burger, but the bun was a little lackluster.

The bun held everything together and was a good size, but it was a little too soft and didn’t have a lot of flavor on its own. But I enjoyed the amount of condiments and didn’t find them overpowering.

The chopped onions added a lot of flavor, and the burger patties were juicy despite being thinner than the Burger King ones. I liked the added cheese but didn’t think it was totally necessary.

In seventh place was the double meat Whataburger with cheese.

I ordered it with a large bun, American cheese, grilled peppers and onions, pickles, and ketchup.

The burger was a decent size and I could see the gooey cheese peeking out from underneath the soft potato bun.

Unlike the other double cheeseburgers, this burger had sliced jalapeño peppers that I imagined would add quite the kick.

The ingredients definitely set this burger apart from the others.

I thought the burgers had a delightfully crispy texture to them, and the toppings added a ton of flavor.

The bun was light and fluffy, but I did think the burger patties could have been a little thicker and juicier.

Coming in sixth was the double cheeseburger from P. Terry’s Burger Stand, a regional chain I visited in Austin, Texas.

The burger cost only $4.10, making it one of the cheaper burgers I tried.

Despite being less expensive than the Whataburger double cheeseburger, the P. Terry’s burger was larger.

I ordered it with pickles, onions, ketchup, mustard, and American cheese.

I again thought the cheese could have been more melted, but the size definitely made up for that small detail.

One of the benefits of ordering from P. Terry’s is that you can easily customize your burger and add a number of toppings including grilled onions, the chain’s special sauce, tomato, lettuce, and more.

I thought the burgers were juicy and the pickles had a tart crunch to them.

The bun was slightly underwhelming, but I thought it was an excellent, large burger with tons of flavor, especially for the low price. I also thought the mustard really came through and added a lot to the burger.

The double cheeseburger from Shake Shack was the second most expensive burger I tried.

It cost me $9.49 for a double cheeseburger. I was able to customize my toppings, but I went with pickles, onions, and Shack sauce.

Right away, I thought the burger was massive.

The burger patties were perfectly crispy on the outside and covered in gooey melted cheese. The pickles also looked large and homemade. It was even heavy to pick up.

The toppings were generous and the chain’s signature sauce added a ton of flavor.

The cheese was thick and perfectly melted.

However, biting into the Shake Shack burger was a little overwhelming, in my opinion.

The burger was huge, which was both an asset and a hindrance. I struggled to get through more than a few bites.

However, despite being the most expensive burger, I definitely thought it was worth the price. The burger patties were much thicker than the other burgers I tried, and the toppings definitely took it over the edge in terms of flavor.

Overall, I was impressed … but stuffed.

I also tried the double cheese slider from White Castle.

White Castle sliders tend to be eaten in pairs, so I ordered two. Each burger cost me $2.09, so I ended up paying only $4.18 for a generous amount of food.

The burgers were small but packed with flavor.

The burgers smelled strongly of onions and condiments the second I removed them from the bag.

The amount of toppings on each burger was generous.

The pickles were crunchy and flavorful. Though the burgers each had a bun sandwiched in the middle of the burger, it wasn’t too bready — instead, it allowed the flavors to really come together while still being filling.

I was blown away by the cheeseburgers from White Castle, a result I admittedly wasn’t expecting.

As the cheapest and smallest burgers, I was expecting them to be a little lackluster. However, I found that good things definitely come in small packages. The onions, condiments, and pickles were flavorful, but it was the beef that really impressed me.

The small-but-mighty burger was one of the most flavorful out of the ones I tried, easy to eat, and perfectly priced.

My third-favorite double cheeseburger was from Five Guys.

My burger cost $11.87, excluding taxes and fees, making it the most expensive burger I tried.

I was able to customize my toppings, but I ordered the burger with pickles, grilled onions, ketchup, and mustard.

Right away, I noticed thar the toppings were generous. The pickle slices were large, and none of the toppings cost extra to add.

The burger was large without being too intimidating.

I thought it was a perfect size. It required two hands to pick up and eat, but it wasn’t as heavy as the burger from Shake Shack. Slices of melted American cheese coated each burger, and there wasn’t so much sauce that it dripped out from underneath the sesame-seed buns.

The burger patties were crispy on the outside but juicy on the inside.

I thought the pickle slices were thick, crunchy, and tart. I also really enjoyed the choice of a sesame-seed bun — it added a bit of texture to each and every bite.

The grilled onions also really impressed me. They were softened and almost caramelized, adding a lot of flavor that I didn’t get from any other burger.

My second-favorite double cheeseburger came from Cook Out, a regional chain I visited in South Carolina.

You can order a “big double” from Cook Out any way you wish, but I ordered mine with cheese, ketchup, mustard, onions, and pickles. It cost me $3.89, not including tax.

It also had thick slices of fresh onion and large pickle spears layered on top of the burger.

For the price, I thought the burger was out of this world.

The cheese slices were thick and tangy, and the burger was perfectly moist and medium-rare. It was also very large, and, after already eating dinner, I struggled to get through more than a few bites, though I kept wanting to go back for more.

At an amazingly low price, this burger definitely earned the second-to-top spot on my ranking.

In my opinion, the best double cheeseburger I tried was the famous Double-Double burger from In-N-Out.

It cost me $4.50, which I thought was an excellent deal for the large burger sitting in front of me. One of the first things I noticed was how thick the burger patties were — they were much thicker than other burgers I tried at a similar price point.

Most Double-Double burgers come with lettuce, tomato, onions, and spread.

To keep my burger similar to the other burgers I tried, I ordered it with onions, pickles, and spread.

The first thing I noticed about the In-N-Out burger was how juicy the burger patties were, followed by the incredible layers of cheese.

The cheese slices were perfectly melted and coated each part of the burger, something I couldn’t say about any other burger I tried.

The bun was perfectly soft and held everything together perfectly, while the special spread had my mouth watering for another bite.

Of all the burgers I tried, I thought the In-N-Out double cheeseburger packed the most flavor for the best price.

While I also enjoyed the burgers from White Castle, the In-N-Out burger was much larger and filled me up much more than the sliders did.

I thought when it came to a double cheeseburger, the West Coast chain really nailed it. The burger was beyond flavorful, the perfect size, and, in my opinion, very good value for money. The next time I’m in a state with an In-N-Out, I know where I’ll be filling my burger craving.