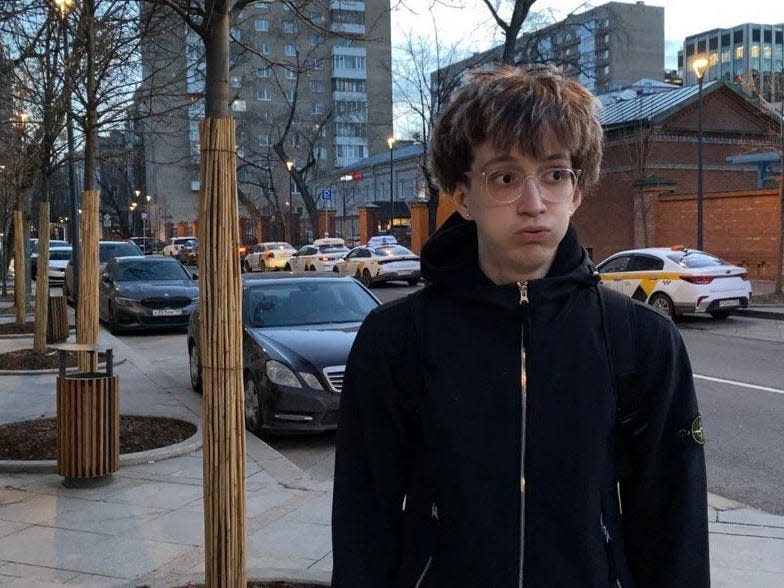 This as-told-to essay is based on a transcribed conversation with Daniil Orain, a YouTuber from Russia. It has been edited for length and clarity.

My name is Daniil Orain. I’m a YouTuber from Russia, and I run the channel “1420.” In my videos, I try to create a montage of everyday Russians and a transparent representation of what they believe.

Since the start of the conflict in Ukraine, people from all over the world have come to my channel to try and understand how Russians think.

Before I started the channel about two years ago, I had some skewed thoughts about the world

At the time, I was working as a software engineer with a three-hour commute, and my perspectives changed when I began to watch on-the-street interviews with people in faraway cities during those rides. Those videos showed me how people from different places and cultures think, and they played a big part in my self-education.

I started to wonder: Why isn’t there something like this on YouTube, but with people from Russia, like me? That’s when my friend and I created 1420.

People often ask me for the story behind the channel’s name, but there’s no secret meaning. It’s just the name of the school we went to together. Our whole aim with the channel was to go out on the streets of Moscow and ask people questions that interested us — things like “Do you believe in God?” or “What do you think about Americans?”

When the conflict in Ukraine began, we suddenly saw a huge increase in viewers

Our increase came from around the world — not just Europeans and Americans, which was our main audience before. With the increased viewership, I decided to double down and try to publish videos daily.

I hired a few people to help; my team of six includes editors, translators, and someone in Moscow who asks the questions. Recently, we’ve asked things like: “What do you think about Ukrainian President Volodymyr Zelenskyy?” “Do you want Ukraine to become part of Russia?” and “Are you feeling the sanctions now?”

To get enough material for a full video, we have to ask a large number of people. Given the nature of our topics at the moment, a lot of people decline to participate.

When shooting the Zelenskyy video, for example, we had 124 people decline to answer. Only 28 people agreed. Even when they do agree, they often hold back from giving their full thoughts.

Making these videos is risky, but we haven’t had any problems so far

Unlike TikTok and Instagram, access to YouTube is still normal in Russia. In the videos, I’ve always muted certain words (but kept the subtitles) to avoid censorship.

For example, you’re not allowed to say “war” when referring to the situation in Ukraine. We have to say “secret operation” instead. So if someone does say “war,” we mute that particular word.

Some people in the comments have accused me of being a Russian propaganda channel, so I’ve had to find new ways to show that I’m not. For example, in one recent video, we blurred the faces and changed the voices of the people in it, so that they could be honest without fear of repercussions. Also, we started showing longer, continuous clips of the interviews so that the viewers don’t think we purposely cut them to tell a certain narrative.

Just recently, the comments on my YouTube videos used to say things like, “Russians are just like us.” But as the situation in Ukraine has progressed, they now tend to be more like: “Russians are brainwashed.”

I’m glad people are watching the videos, because I know from my own experience how helpful YouTube can be. We’re lucky to be able to learn online.

You’ll notice that in my videos, there’s a pretty clear divide between the answers coming from people who grew up in Soviet times and the younger people. When the older generations were growing up, they got their education only from books or teachers — they didn’t have access to the world like people my age do. The position that I’m in, running this channel, wouldn’t have even existed back then.

Today, you can learn things from websites, videos, and even comments

Just last week, on one of my own videos, one viewer wrote: “You are not scared, not because you are fearless, but because you just haven’t been scared yet.”

That blew my mind. I know what I’m doing is risky, but maybe I don’t feel worried about it because I’ve never actually been that worried. But at the same time, I’m just the storyteller. A lot of people direct message me asking for my opinion on various topics, but I don’t answer them.

I see my role as being the person who helps tell people’s stories, and I’ll continue to do so in order to show how and what Russians feel.