‘I Did Not State the Person Was White’: One Scottsdale Diversity Expert Struggles to Face the Truth, Another Apologizes After They Wrongly Accuse An African-American DJ of Wearing Blackface 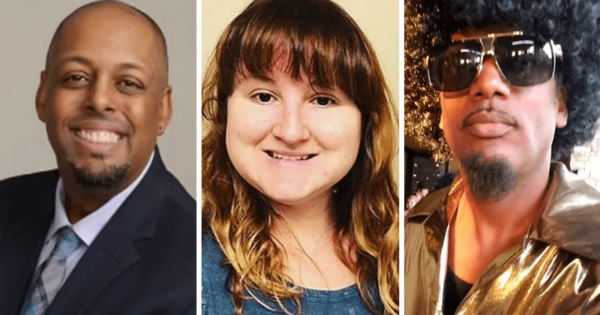 Both activists, a Black man and the other a white woman, took to social media to blast the occasion, unaware the person in question was actually a locally acclaimed African-American entertainer, naturally dark-skinned without makeup.

Rhoden, who serves on the Scottsdale school district’s Equity and Inclusion Committee with Lassen, contacted the school’s principal to complain.

However, after being informed about their mistake, he and his partner-in-wokeness struggled to apologize for casting a dark cloud on the event that raised $300,000.

The protester took to social media to explain himself, “After sending an email to the principal to express my concern, all I received was that the DJ was a ‘Black man.’ The PTA president responded that; ‘I would like to set the record straight. The **** PTA hired a black man to be our DJ. Please share with me how this is culturally unaware? I know no apology will undo this image, so I will not be offering one.”

In response to the PTA president’s email, Rhoden wrote, “Let me be clear, a Black man, apparently in Black face, is an entirely different discussion than a White person. However, I did not state that the person was White.”

‘It was assumed that was my intent, and perhaps it was, but nonetheless, looking on his FB page (photos below), it seems at the very least he is in darker make-up if not ‘Black face’ or I am completely mistaken and it’s the lighting of the patio,” Rhoden wrote.

“So, here’s what I want to say. I apologize to dude for the implication,” he continued. “But the sentiment still stands, Black face by anyone, in this day and age is problematic. I also apologize to folks who reposted and made other statements based on my assumption.’

After sending an email about the “blackface” incident to the head of the Hopi PTA and saying the group was promoting racism, she was told her comments were “disheartening,” “aggressive,” and “hurtful on both the PTA level and a personal level.”

The DEI activist answered, “I cannot fathom the hurt, anger and frustration you felt after you and others volunteered countless hours on your event. Again, I truly apologize. I hope that you can find it in your heart to forgive me and not harbor resentment towards SPC.”

Parent Amanda Wray doesn’t accept either person’s apology, “When these community activists were informed that their accusations were wrong, they didn’t apologize, they doubled down. The SPC is so intent on finding racism they will go so far as to accuse a member of one of the communities they claim to advocate for of reprehensible behavior.”

Historically, blackface has its roots steeped in the 17th and 18th centuries, as white performers played characters that demeaned and dehumanized African-Americans. This was not the case. Hunter was dressed up in an afro wig, gold shirt, sunglasses, and roller skates to replicate the ’70s disco dance era.

Hunter appeared on the Conservative Circus podcast with James T. Harris to discuss the controversy. Hunter, a Carnegie foundation award recipient for having the No. 1 teen program in the country and former VP for the Harlem Globetrotters, said he has never worn “blackface.”

“Have I ever done the minstrel show blackface? Absolutely not,” he said.

The DJ explained that his boss Ryan Ingram told him a group of people was saying he was in blackface and he was afraid it might become a problem for the company. When he read Rhoden’s apology he was taken aback, exclaiming, “Whoa!”

He said didn’t want to assume what the professor was thinking about and wanted to know “how” and “why” he thought he was coloring his face.

“I would like to see it through their lens,” he said to the host. “How did they come to their assumption and why did you come to that assumption? In my opinion, it is quite obvious what the image actually was.”

While the master of ceremony doesn’t harbor any contempt for the two, he is concerned about the long-term effect this will have on his career.

“I don’t know what’s going to come of this. My picture is there. My name is there,” he concluded. “We don’t know how people are going to digest what happened.”