How to Vote in New York’s Primary Election 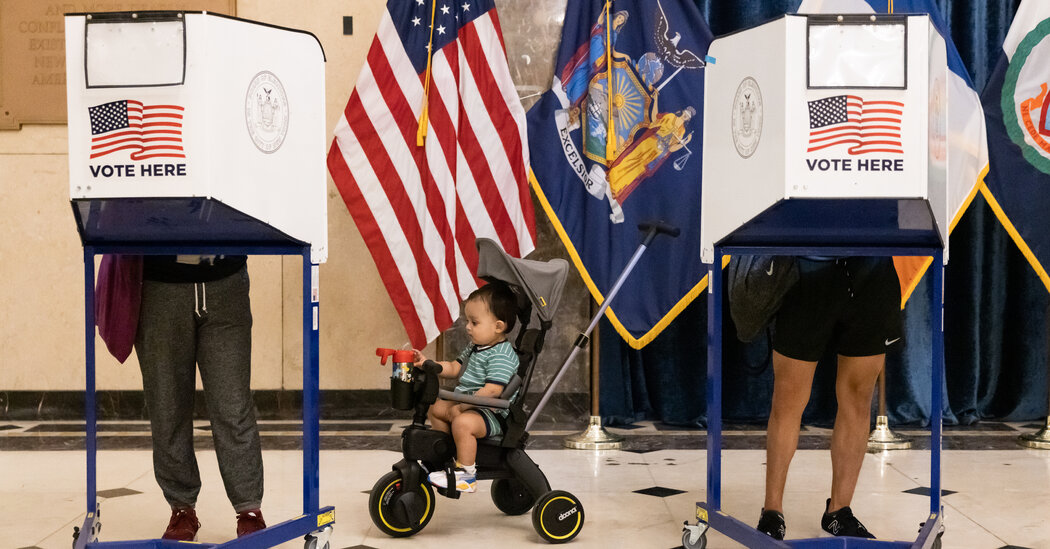 The race for New York’s next governor is in full swing, and Primary Day is set for Tuesday, June 28. The early voting period began last weekend and continues through Sunday.

The primary will decide some important questions: Will Gov. Kathy Hochul, who took office after her predecessor resigned last August, notch a decisive win over Democratic challengers? And who will be the leading face of the state’s Republicans?

Here’s what you need to know about the primaries for governor, and the other races on the ballot.

In the Republican primary, the only candidate for lieutenant governor is Alison Esposito, a former New York City police deputy inspector whom Mr. Zeldin named as his running mate.

Ms. Hochul has a formidable lead in fund-raising over her Democratic opponents and has racked up key endorsements. She is also using the power of incumbency, emphasizing popular measures she helped push through the legislature, like a bill to shore up protections for abortion providers ahead of Friday’s Supreme Court decision to overturn Roe v. Wade.

Mr. Williams, who is challenging Ms. Hochul from the left, ran a competitive race against her for lieutenant governor in 2018 but has not gathered the same momentum this time. Mr. Suozzi is bucking party leaders in a bid to outflank the governor from the right with a focus on crime and taxes.

The Republican race has been playing in part like a referendum on former President Donald J. Trump. Mr. Zeldin, once considered a moderate, has become a strong Trump supporter who has accused rivals of insufficient fealty to the former president. That dynamic, whoever the winners, sets up a stark contrast between the parties ahead of the general election.

What other races are on the ballot?

The June 28 ballot also includes primary races for the State Assembly, the lower chamber of the Legislature, which is controlled by Democrats. All 150 seats are up for grabs in the fall, though not all members face primary challenges.

In the Democratic Assembly races, a slate of left-leaning candidates are challenging a number of established members.

They aim to push Democrats to commit to progressive agenda items — such as climate bills, including one allowing the state to build publicly owned renewable energy projects — or defeat them by focusing on those issues.

Candidates for state attorney general and state comptroller are unopposed in the primaries, as is U.S. Senator Chuck Schumer, the majority leader, though he will have a Republican challenger in the fall.

Voters in Brooklyn, Manhattan and Queens can also vote on candidates for judgeships.

When and how can I cast my ballot in person?

How do I find my polling place?

In most cases, your polling place during the early voting period will be different from the one you’d go to on Election Day. Enter your address here to find the locations for each.

That website will also tell you the hours for early voting at your polling place, the locations of accessible entrances, and which legislative districts you’re in. You may also have received a voter guide in the mail that contains this information.

Anyone who encounters obstacles to voting can call the state’s election protection hotline at 866-390-2992.

How do I vote by absentee ballot?

The deadline has passed to apply for an absentee ballot by mail, but you can apply for one online here.

You can also apply in person at your county board of elections until June 27, or identify someone else to deliver your application. You can cite the Covid-19 pandemic or a number of other issues as reasons you’d like to vote absentee.

But under a recent change in the law, if you request an absentee ballot and then decide to vote in person instead of voting on a machine, you will have to submit an affidavit ballot.

Absentee ballots must be mailed or submitted to your county election board by Election Day. Mailed ballots must arrive by July 5 to be counted. To see if yours has been received, use the new absentee ballot tracking tool recently added to the state’s voter registration and poll site search page.

Just over 89,000 ballots had been cast during the early voting period as of Thursday, according to the state board of elections.