How Hated Is Macron? It Could Decide the French Election. 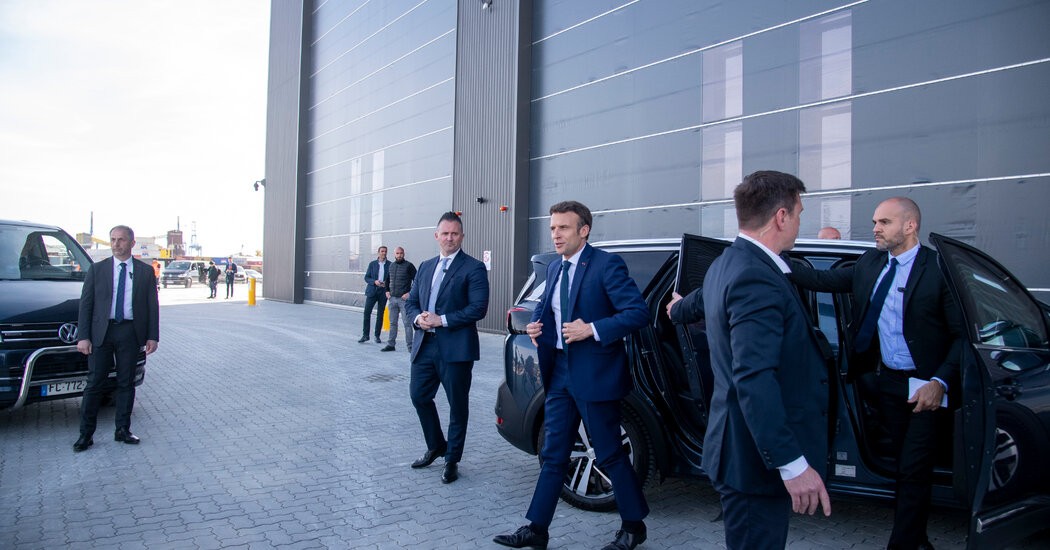 LE HAVRE, France — As an ardent supporter of President Emmanuel Macron of France, Nicole Liot was all smiles after seeing him at a recent campaign stop. But she was also worried about the final round of the French election this Sunday. In her lifetime, she had never seen such intense dislike for a president among some French.

“There are presidents who weren’t hated like this even though they weren’t saints,” Ms. Liot, 80, said, positing that what has become known as Mr. Macron’s “little phrases” fueled the aversion. “Like when he told someone, ‘You’re searching for a job? Just cross the street and you’ll find one.’”

As anti-Macron protesters burned tires and blotted the sky with smoke over the northwestern city of Le Havre, Ms. Liot added, “Maybe people won’t forgive him for these mistakes of language and attitude.”

No French president has been the object of such intense dislike among significant segments of the population as Mr. Macron — the result, experts say, of his image as an elitist out of touch with the ordinary French people whose pensions and work protections he has threatened in his efforts to make the economy more investor-friendly.

Just how deep that loathing runs will be a critical factor — perhaps even the decisive one — in the election against his far-right rival, Marine Le Pen. Recent polls give Mr. Macron a lead of around 10 percentage points — wider than at some points in the campaign, but only a third of his winning margin five years ago.

“Macron and the hatred he arouses is unprecedented,” said Nicolas Domenach, a veteran political journalist who has covered the past five French presidents and is the co-author of “Macron: Why So Much Hatred?,” a recently published book. “It stems from a particular alignment. He is the president of the rich and the president of disdain.”

No doubt Mr. Macron could end up winning re-election despite his unpopularity. Even if a groundswell of voters does not turn out to vote for him, what matters for him is that enough voters come out to vote against her — to build a “dam” against the far right.

It is a long-established strategy to erect a so-called “Republican front” against a political force — her party, the National Rally, formerly the National Front — that is seen as a threat to France’s democratic foundations.

But given the choice between a president they find disdainful and a far-right candidate they find detestable, many French voters may just stay home, or even vote for Ms. Le Pen, tipping the scales in a close election.

Every chance she gets, Ms. Le Pen has done her best to remind voters of “these terrible words” — “these words of disdain” — that now stick to Mr. Macron, as she did at a big campaign rally in the southern city of Avignon last week.

“They are the words of a power without empathy,” she said as the crowd booed.

Both she and Mr. Macron are now vying in the campaign’s closing days for the voters who cast ballots for other candidates in the first round of the presidential election on April 10, on whom the election now hinges.

Roland Lescure, a lawmaker and spokesman for Mr. Macron’s party, La République en Marche, said he was convinced that “rejection for Marine Le Pen” would prove more potent than the dislike for the president, which he recognized.

The rejection was not just of the person of Ms. Le Pen, he said, “but above all of an ideology, of a political history and of a platform, which, when one reads it, is extremely harmful.”

But Ms. Le Pen has grown so confident in her widening appeal after taking calculated steps to soften her image that she has even dared seize the term “dam” for herself — beseeching voters six times in her rally to build a “dam against Macron.”

The calls for dams on both sides underscored how the final vote boils down to an unpopularity contest: The less-disliked candidate wins.

It is especially true in this race, which features the same finalists as in 2017. But if Ms. Le Pen was seen as a bulldozer of far-right ideology back then, in the current campaign she has tried to present a softer, more personable side.

And if Mr. Macron was once seen as a fresh face who inspired many with his promises to change an ossified France, this time he has been cast by his haters as a kind of malign king.

As Mr. Macron finally engages the race, he is now being confronted with the raw emotions that have shaped much of his presidency.

What to Know About France’s Presidential Election

The far-right veteran. Ms. Le Pen, a nationalist with an anti-immigrant agenda, is making her third attempt to become president of France and is facing Mr. Macron for a second time after losing to him in the 2017 runoff. Though she has sought to sanitize her image, her proposal to ban Muslim women from wearing head scarves is controversial.

What comes next? At 8 p.m. in France on April 24, the French news media will work with pollsters to publish projected results based on preliminary vote counts, though projections might not become clear until later if the race is close. Read more about the runoff here.

“I’ve never seen a president of the Fifth Republic as bad as you,” a man told him during a campaign stop last week, accusing him of being “arrogant” and “disdainful” among other things. A visibly annoyed Mr. Macron made a circular motion around his right temple with his forefinger.

In the deindustrialized, impoverished north — a Le Pen stronghold — Mr. Macron is so unpopular that he even lost in his hometown, Amiens, in the first round. In one city in the region, Denain, a woman buttonholed him on a campaign stop with strong criticism about his presidency, his handling of the pandemic and schools.

In Argenteuil, an impoverished suburb of Paris, Claudine Pasquier, a retired school secretary carrying two grocery bags, rattled off Mr. Macron’s “little phrases” — like when he called train stations places “where one encounters people who are succeeding and people who are nothing” or his reference to the “crazy amounts of dough” spent on benefits for the poor.

“We remember all these little phrases because they humiliated people,” Ms. Pasquier said. She had voted for Mr. Macron in 2017, but was now undecided, she added.

Pierre Rosanvallon, a historian and sociologist at the Collège de France, said that the little phrases had been “catastrophic” in forging Mr. Macron’s image and fueling the widespread sense of disdain that he said was a central factor in French politics and society today.

“It’s about the relationship between a disdainful elite and a society that is disdained,” he said.

Mr. Rosanvallon noted that “disdain” also ran deep among Ms. Le Pen’s core supporters — though it is directed at migrants, foreigners and others perceived as socially inferior. Ms. Le Pen has said that she will increase benefits for people like those who vote for her by taking them from immigrants.

Ms. Le Pen had grasped the power of this dynamic, Mr. Rosanvallon said, and understood that economic hardship was not only about money, but needed to be addressed “in terms of dignity, in terms of respect, in terms of feeling abandoned.”

Mr. Lescure, Mr. Macron’s party spokesman, said much of the anger against the president stemmed from a misunderstanding of his governing style, which he compared with those of the former presidents Charles de Gaulle and François Mitterrand — two so-called Republican monarchs also regarded as aloof.

“When he is described as haughty, distant and even arrogant, I think it’s also because his practice of power is much less popular, in the sense of being people-oriented, than others,” he said.

It has put off even many of the president’s earlier supporters.

“He has said everything and its opposite, he has despised many people,” Ms. Saidj said, adding Mr. Macron had acted like “a king.”

In Le Havre, another staunch Macron supporter, Bilel Benaouda, a 22-year student and would-be entrepreneur, was also worried. He had voted for Mr. Macron in the first round. But his brother and most people around him had endorsed Mr. Mélenchon and were now planning to stay home in the second round.

“Last time, the election was more about anti-Le Pen,” Mr. Benaouda said. “But this time, it’s about both anti-Le Pen and anti-Macron.”

Norimitsu Onishi reported from Le Havre, and Constant Méheut from Argenteuil and Avignon.