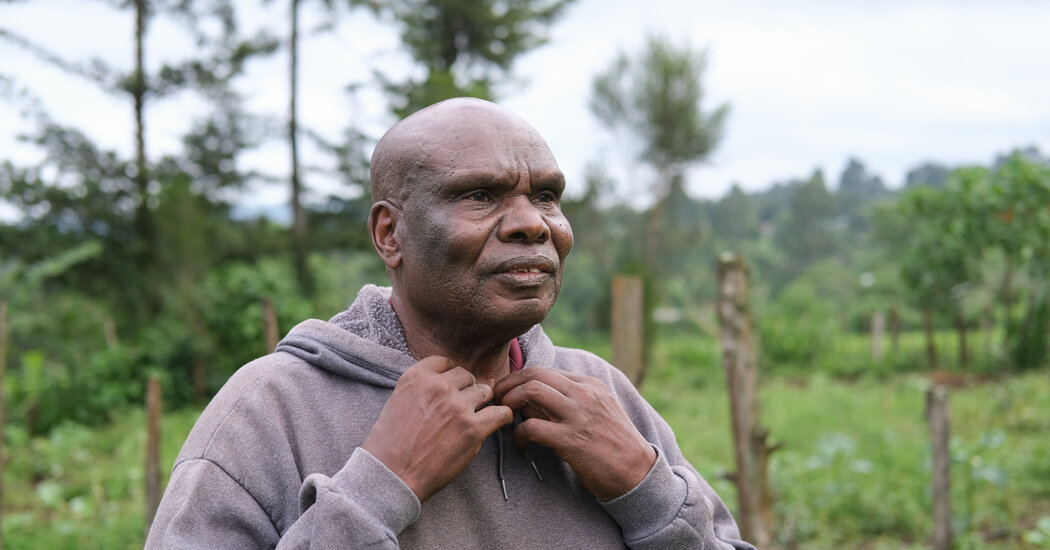 KIPTARAGON, Kenya — One afternoon in May, as a cold rain pelted the roof of his brother’s rural home, Henry Rono sipped a mug of tea and reflected on what he called his greatest achievement.

To most running fans — especially those who came of age during the 1970s, the sport’s boom years — his signature accomplishment would seem obvious. Stifled by the Kenyan boycotts of the 1976 and 1980 Summer Games, Rono never experienced Olympic glory. But his 1978 season was one of the most remarkable ones in track history.

Over 81 days, as a 26-year-old Washington State sophomore, he set world records in four events: the 3,000 meters, 5,000 meters, 10,000 meters and 3,000-meter steeplechase. It was a feat accomplished by no one else before or since: Rarely does a runner with the stamina to break new ground over 25 laps have the speed to do so over seven and a half laps with barriers. Yet to Rono, decades later, its significance barely registers. Instead, he’s proudest of a period later in life when he enrolled in a community college and finally achieved what he said had long eluded him: a mastery of English.

“Running to me was second nature,” he said. “Education was my weakness.”

If Rono’s attitude toward his records defies convention, it’s in character: In the nearly half-century since he first left Kiptaragon, a collection of small farmsteads in the Nandi Hills of the high-altitude Rift Valley region of Kenya, his life has unfolded as a remarkable, if largely accidental, “Forrest Gump”-style adventure — one that has taken him from the pinnacle of athletics to the depths of addiction and to nearly every corner of the United States in between.

Today, after more than three decades away, he’s back in Kenya, finally sober, among the avocado trees and bougainvillea flowers of his youth. Rono is hardly settled: He had returned expecting a job coaching up-and-coming athletes, but local officials told him on arrival there was no room in the budget. He is largely estranged from his wife and two children, who live on the properties he bought at the peak of his running career. Still, at 70, he is far more than the fallen hero he has come to represent within the world of elite running.

“Henry’s such a more complex and endearing figure than he’s usually depicted,” said Tomas Radcliffe, a professor of English at Central New Mexico Community College, who edited Rono’s self-published memoir. “His goals and motivations are pure to him. That may be the most exceptional thing about him.”

Rono’s early years were marked by tragedy. A bicycle accident left him unable to walk until age 6. His father’s death in a tractor accident around that time meant the family struggled: Rono was in and out of school for years as his mother scraped together fees. He was drawn to running by the time he completed seventh grade at age 19, inspired by Kipchoge Keino, who hailed from a nearby village. Keino’s 1,500-meter win at the 1968 Olympics ushered in an age of Kenyan running dominance, one that Rono would soon join.

His talent blossomed when he was recruited by the army, in which his duties consisted mainly of training. Rono’s big break came before the 1976 Montreal Olympics. He was named to the Kenyan squad and expected to be a major threat in the 5,000 meters and the steeplechase. But Kenya’s government announced an 11th-hour boycott, joining most African countries in protesting the inclusion of New Zealand, whose national rugby team was touring apartheid South Africa.

“I thought this man would come home with two golds,” said Keino, who had been coaching the Kenyan team in Canada before the boycott was announced.

There was solace: After a 1973 court ruling scuttled an N.C.A.A. rule that placed limits on foreign athletes considered “over-age,” American college coaches were increasingly recruiting Africans, particularly in track. Two months after missing the Montreal Games, despite never having been to high school, Rono found himself in Pullman, Wash., where a young coach, John Chaplin, was nurturing a talented group of Kenyan runners.

As Rono struggled to adjust to schooling and life in the United States, running was his way to “release tension.” By his second year of training in the Snake River Canyon, he shifted into a new gear. Rono didn’t simply break four world records: He obliterated them in low-key meets with little competition, on a diet of cheeseburgers and Budweiser. His stride wasn’t the most graceful. But his willpower and barrel-chested force were unmatched.

“I could tell him exactly what to run, exactly how to do it, and he would do it,” Chaplin said.

It was after that climax, in most accounts of Rono’s life, that the drawn-out, tragic denouement began. While there were a few more moments of glory, including a 1981 season that began with a beer belly and ended with another 5,000-meter world record, his luster faded quickly.

Despite a college degree and a contract with Nike, he receded into a cocoon of personal struggles. Disheartened by friction with athletics officials back home, he began drinking with increasing regularity. Like many Kenyan stars of future generations, he was careless with money: He lost track of bank accounts, had cash stolen on airplanes and was lured into bad investments by con artists. Soon, he was drifting across the United States, in and out of friends’ guest rooms and alcohol-addiction rehab. He parked cars in Portland, Ore., rang the bell for the Salvation Army in Salt Lake City and pushed people in wheelchairs at the Albuquerque airport.

There were more uplifting periods. In the 1990s, after settling in New Mexico, he spent time as a special-education teacher and coach. He trained college athletes in the Navajo Nation and aspiring elites in Albuquerque and was invited for a stint in Yemen to develop national-caliber athletes there. Kris Houghton and Solomon Kandie, runners based in New Mexico who set personal bests under his guidance, described him as a “wise sage” with a reverence for hills and deep appreciation for the sport’s mental aspects. “He loves the pureness of someone seeking to better themselves,” Houghton said.

It was around that time, still lacking confidence in English, his third language, that Rono went back to school, eventually progressing to classes on poetry, advanced grammar and creative writing before publishing his 2010 memoir, “Olympic Dream.” Only one of the book’s 29 chapters details his famed 1978 season.

“He never talked about the records,” Chaplin said. “He was not someone to go around and beat his chest and say ‘how great I am.’”

Eventually, as Rono aged and paying rent became a greater struggle, Kenya began calling. In 2019, for the first time since the Reagan presidency, he stepped foot in the country of his birth, settling into his brother’s home on the same plot as the thatched hut where they grew up. Not everything has gone as planned: Disputes with his family over his properties, including a farm and a house in Kenya’s capital, Nairobi, have left him resentful. He longs to return to coaching. Aside from church and trips to the sauna — he has always preached the virtues of sweating — Rono rarely ventures out.

Still, as he narrates his tales of past adventure, he also projects a sense of contentment — and appreciation for what running has given him, even if his records meant less to him than they did to fans of the sport.

Running, he said, opened a path: to a world beyond Kiptaragon village, and to an unexpected route back.