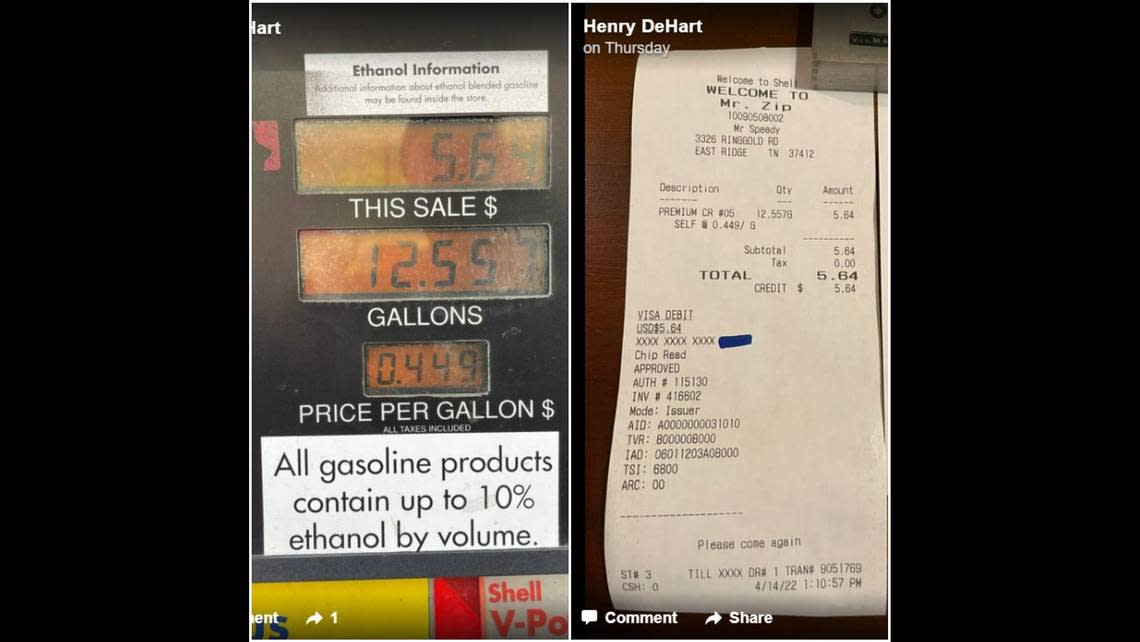 For a brief few hours, a convenience store in Tennessee was offering perhaps the lowest fuel prices of any gas station in the country — only the owner didn’t know it.

One customer, Henry DeHart of Chattanooga, knew something was wrong when, after putting 12 gallons of premium gas in the tank of his car, the pump’s digital readout displayed a surprising total: $5.64.

And the price per gallon? Just 45 cents.

With the average cost for a gallon of gas hovering well over $4 — and the price of premium gas in Tennessee at $4.64 a gallon — the deep discount would have been welcome if it wasn’t so clearly a mistake, DeHart said in an April 14 Facebook post.

DeHart went inside to explain the situation to the gas station owner, he said.

A language barrier caused confusion at first, so DeHart asked the owner for his receipt. The dollars and cents on the slip of paper spelled out the problem clearly, and the owner couldn’t hide his pain.

“He ran back around the counter [and] started poking at his screen and then turned green. Nobody had told him in the last 5 hours,” DeHart said.

“There’s no telling how much money he lost today. He was on the verge of tears,” he said.

Gas station owners make a slim profit on gasoline sales, usually about 10 to 15 cents on the gallon, according to the National Association of Convenience Stores. And rising prices hurt their bottom line, as customers become less likely to buy snacks and drinks or other in-store items, which are more profitable than gasoline.

“What I find most frustrating about this is that this man … with the guts to own a small business would get screwed over by people for half of [the] day,” DeHart said.

“How many people this morning thought, it’s my lucky day, while this man was getting taken to the cleaners?” he added.

Not everyone was happy that DeHart had brought their “lucky day” to an end, he said. A man in line behind him made that clear, DeHart said.

“I get it, times are tough and gas is expensive, but NOTHING in this world is free,” DeHart said. “Someone is ultimately always footing the bill.”

DeHart said he paid what he should have owed.

It wasn’t enough to cover the owner’s losses, but “he had already taken such a beating” that it seemed like the right thing to do, DeHart said.

Customer who couldn’t afford $416 gas bill had to return next day to pay, sheriff says

Gas stations will soon offer fuel with more ethanol. Could it save you money?