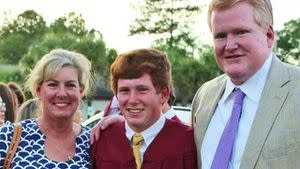 Prominent South Carolina attorney Alex Murdaugh, who faces more than 70 criminal charges, could now face charges in connection with the June 2021 killings of his wife and son, a family spokesperson confirmed to WCIV Tuesday.

Maggie and Paul Murdaugh were found murdered outside their Colleton County home in June 2021.

John Marvin Murdaugh, Alex’s brother, confirmed to WCIV-TV’s Anne Emerson that SLED agents met with the family to share that the agency is pursuing indictments from the state grand jury against Alex Murdaugh in connection with the killings.

According to WCIV, John said investigators did not tell the family what charges Alex Murdaugh, 54, will face, but did say the charges are connected to the deaths of his wife and son.

“We want the the truth,” John said.

At this point, no one has been charged specifically in connection with Maggie and Paul’s deaths, but Alex Murdaugh’s criminal defense attorneys did confirm in the fall of 2021 that he had been identified as a person of interest in the case.

The deaths of his wife and younger son prompted at least a half-dozen investigations into Alex Murdaugh and his finances that resulted in indictments against him. Alex Murdaugh is facing charges that he stole $8.5 million from people who hired him and that he lied to police in saying he was shot by a stranger on a roadside when — officials say — he really asked a friend to kill him so his surviving son could collect a $10 million life insurance policy.

A number of other former clients have accused him of stealing from them, leading to dozens of criminal indictments. Alex Murdaugh signed a civil settlement saying he is responsible for taking more than $4.3 million from insurance settlements meant for the family of his housekeeper Gloria Satterfield, whom Alex Murdaugh said died after a fall in the family’s home.

Alex Murdaugh has been held at the Richland County Detention Center since October 2021. A judge set his bond in December 2021 at $7 million.