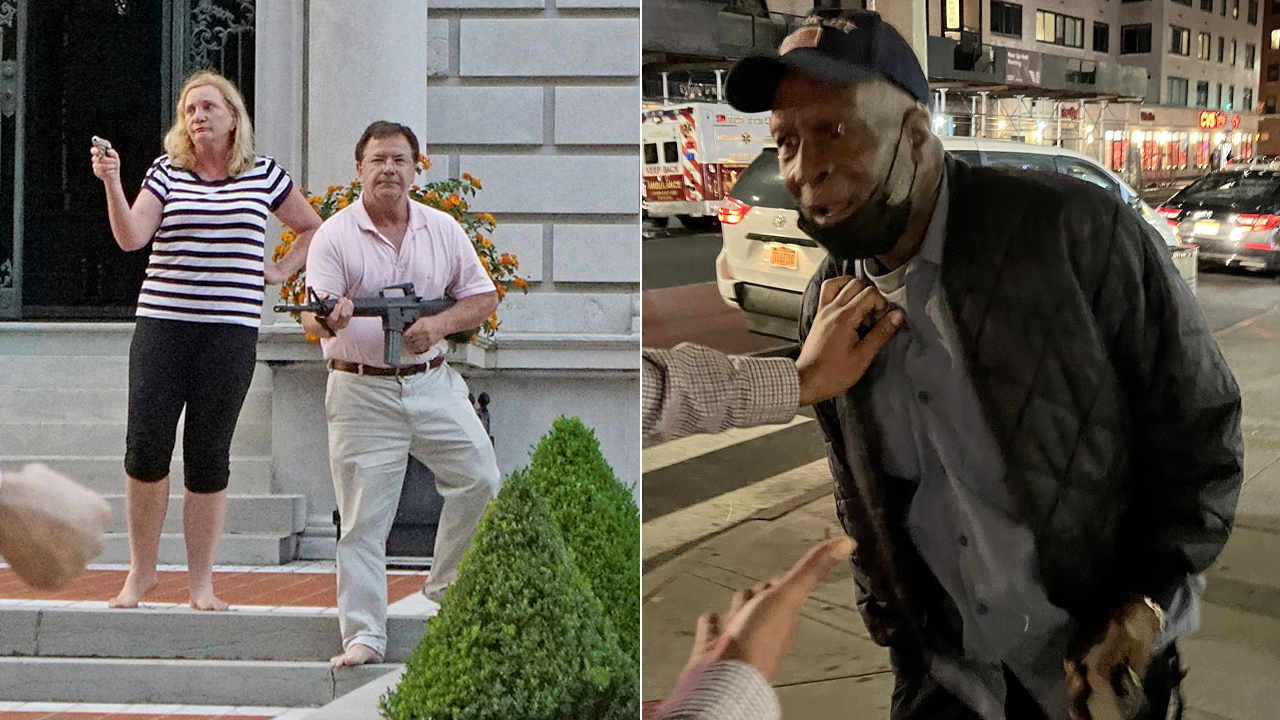 FIRST ON FOX: U.S. Senate candidate Mark McCloskey, who defended his St. Louis home with an AR-15 during a BLM protest, says “we cannot be intimidated” after an alleged burglar infiltrated his campaign event in New York City.

On Thursday, April 21, a man dressed in a maintenance uniform stole a wad of cash and checks from the lobby of the Metropolitan Republican Club while Manhattan politicos rubbed elbows during a speech McCloskey delivered in another room.

The club’s president, Ian Walsh Reilly, called the police and reported the alleged theft before he and two other club members ran after the man and managed to restrain him in on a street corner in the exclusive Upper Easter Side neighborhood until police arrived moments later and arrested him.

While McCloskey was unaware at the time that a possible crime was unfolding steps away from where he was addressing a captive audience of about 150 political influencers, he did learn about it later and blames Democratic leadership for waging a “war on police” and creating a “lawless environment” in order to scare the public into yielding their personal autonomy to government officials.

Police on the scene following the arrest of a man accused of attempting to burglarize the Metropolitan Republican Club.
(Ian Walsh Reilly)

“The left likes to have lawlessness in cities because frightened people are willing to give up their rights,” McCloskey said.

However, the personal injury lawyer will not be deterred from holding similar events in the future.

“If the goal of the left is to intimidate people into staying at home and not going out or living their day-to-day lives, that’s all the more reason for us to do it,” McCloskey told Fox News Digital. “Because we cannot be intimidated. We have to constantly stand up for our rights.”

McCloskey and his wife Patricia gained national media attention in the summer of 2020 when videos surfaced of the couple standing outside their St. Louis, Missouri, home holding an AR-15 and a handgun respectively as Black Lives Matter protesters marched through their suburban neighborhood.

McCloskey says the rot in the Big Apple is no worse than issues he’s facing at home.

“[The murder rate in St. Louis] is 20 times the murder rate of New York City,” McCloskey claimed, insisting the stunning statistic is at the heart of his bid for U.S. Senate.

McCloskey blames much of his beloved city’s crime problems on prosecutors “failing to prosecute big swaths of the law.”

“There is a group of police officers whose arrests she won’t prosecute because she believes that they have previously said racist things on Facebook,” McCloskey said.

The candidate for federal office sees a path to making cities across the country safer if elected in November.

“Obviously the big cities run on federal dollars, and so there are ways you can control their behavior either directly or indirectly,” McCloskey said.

McCloskey faces a crowded Republican primary on August 2 where his opponents include several federal and state officials, as well as former Missouri Governor Eric Greitens, who resigned in 2018 amid a sexual misconduct scandal and allegations of misuse of a charity donor list.

About 10 people claiming affiliation with Black Lives Matter demonstrated outside the Metropolitan Republican Club on Thursday night in protest of McCloskey’s appearance at the club, but neither he nor Reilly believe the alleged burglary to be connected to those activists in any way.